National Dialogue: Journalists as Bearers and Promoters of Human Rights

The half-day National Dialogue entitled “Journalists as Bearers and Promoters of Human Rights” brought together more than a hundred participants including representatives from Civil Society Organizations (CSOs), Non Governmental Organisations (NGOs), Human Rights Organisations, the media fraternity, members of media self-regulatory institutions, the police and the army, academic institutions, and the general public. The government was represented by the Honorable Princess Kabakumba Masiko, Minister of Information and National Guidance of the Republic of Uganda.

Based on inputs from panellists followed by a vibrant open debate, the dialogue proved to be a welcome platform for all major stakeholders for discussing pertinent issues related to civil liberties and press freedom in Uganda. The role of journalists in promoting human rights as well as the declining safety and secure environment for journalists, particularly in the context of the coming elections in 2011 received particular attention during the discussion.

The Ugandan Government’s record generally attests to its will to reform and its pro-development policy. Uganda has ratified several international human rights conventions and embodied some of these in its constitution. Progress has been made in economic, social and cultural rights in particular over the last 20 years. However, the African Peer Review Mechanism (APRM) has cited clear deficits in human rights and democracy and proposed corrective measures. Although these have partly been accounted for in the new National Development Plan (NDP) more needs to be done. In particular, journalists and the media are considered to be denied their constitutional rights. The media play an important role in promoting respect for human rights particularly through objective critical reporting and public exposure of human rights violations in the country. The combination of a restrictive environment and a lack of professionalism seriously undermine the ability of media practitioners to effectively play a role as promoters of human rights in Uganda.

The National Dialogue followed a 3-day interactive and participatory workshop. 22 participants from the media and human rights organisations discussed the state of human rights in Uganda with specific focus on freedom of the press, freedom of opinion and freedom of information and also identified the main challenges for free and critical journalism. They developed strategies for managing these challenges and worked out their recommendations towards the government, the Parliament and Judiciary as well as to the media itself. The results were presented by the workshop facilitators to the wider audience during the national dialogue.

In her speech, the Minister acknowledged the important role that the media play in the democratic society and also the democratic rights of citizens who need to be adequately informed. She also highlighted that with regard to the promotion and protection of human rights, the state had a duty and responsibility towards itself, the public and the media as emanating from the fact that Uganda was a signatory to and had ratified many international treaties and legal instruments on Human Rights and Freedoms of the people. She stated that media freedom was guaranteed in Uganda by the state through laws, policies and efforts of cooperation between the state and the journalists. On the other hand she noted that over the years the media in Uganda had failed to regulate and define themselves. Unregulated media could act as the very source of endangering public law and order through, for instance, the incitement of violence through hate speech which perpetuates violence between individuals or between groups. The enjoyment of certain rights by the rights holders must not endanger the enjoyment of rights by other rights holders. Therefore there were limits to which press freedom, freedom of expression, freedom of conscience, and freedom of opinion could be enjoyed. According to the minister, the importance of media regulation indicates the importance of the proposed media law that was to enable the government come up with a clear way of ensuring that the media were accountable to itself, government and the public. She noted that one of the ways government was regulating the media was through the establishment of the media council which serves as the instrument for external regulation of the media by government. She however noted as well that the need for coming up with regulatory frameworks was to enhance capacity towards building self-accountable media rather than to control and inhibit media functioning.

Rose Mary Kemigisha, Senior Officer at the Uganda Human Rights Commission, pointed out that research done in some countries in Africa showed that freedoms of the press, opinion and information are commonly targeted by states through severe restrictions and open violations and that the state often uses the arguments of national and public security to infringe on these rights. Although freedom of the media in Uganda had improved tremendously over the years and the Ugandan Constitution was very progressive in terms of providing for human rights there are still significant challenges. The gap between existing provisions and their implementation was undeniable, she stated. Some of the positive developments include the growing number of media outlets and media training institutions; the increasing availability of the internet and efforts by government to set up tele-centres upcountry; launching of a self-regulatory body for the media, the Independent Media Council of Uganda to deal with complaints about ethical issues concerning the media; a Journalism Code of Ethics has been developed and availed to all media houses. However, she also noted some concerns. The existing legislation e.g. Interception of Communication Act, Anti- terrorism Act, Penal Code Act sections on sectarianism, criminal libel etc. interfered with the freedom of the press, restricted journalists in their work and lead to self-censorship by media houses and editors. Based on those provisions journalists would face numerous court cases that require them to report to court many times. On the other hand there was impunity of the state institutions. Police summons and interrogations remained without charges.

Presentation of the results from the National Workshop

In the following part of the dialogue the focus shifted from the analysis of the state of human rights in Uganda to the concerns of the key actors, human rights activists and journalists. Prior to the national dialogue a national workshop had been held and here some recommendations were proposed under what was entitled as “Draft Declaration on Journalists as Bearers and Promoters of Human Rights”. The document was presented by Geoffrey Wokulira Ssebaggala from Human Rights Network for Journalists and J.B. Wasswa from Makerere University. It includes the journalists’ perspective on the enjoyment of human rights in Uganda, concerns with regard to harassments, illegal arrests, detention, intimidation or even killing of journalists as well as recommendation to the government, the Parliament and Judiciary. Participants encouraged all journalists to popularize the ethical code of conduct as a way of applying a human rights based approach and also to use the existing networks to popularize the importance of the media in the democratization process. Journalists developed strategies for practitioners and media organisations that should be used to ensure quality standards and ethical conduct. Socially responsible and conscious reporting, capacity building for journalists, mainstreaming of a human rights approach through media houses and networking form elements of these strategies.

In the subsequent discussion participants mostly supported for the arguments brought forward by Rose Mary Kemigisha and the workshop facilitators and directed their concerns toward the Minister Princess Kabakumba Masiko.

Particular attention was given to the question of harassment by security organizations especially Police and Army. This was explained in the context of accessing the sources of information. As one participant put it, it leads to increasing self-censorship of the media houses. Journalists would fear to report accurately on government issues. It was also stated that central government had become an obstacle for the media to carry out their work. The question that arose was whether the media in Uganda can work without interference from the government.

The Minister agreed to put open punishments to those who harasses journalists or any other individuals but also to journalists who misbehave. Journalists had been asked to report those who violate laws. She highlighted that institutional harassment of media by institutions such as police only happened when media turn out to be abusers and violators of other people’s rights. She reminded the audience that the sources of information are asked for only in cases of reporting of lies and false stories. She pointed out a lack of professionalism and accountability of the journalists which would make it necessary for the government to regulate media through its bodies. With regard to the presented Declaration, the Minister appealed to journalist not to wait for the newly elected government until May 2011 but implement their strategies straight away.

The Deputy General Inspector of Police, Mr. Kasingye emphasised that there is interdependence between media and police and both of them need to cooperate and mutually help each other. In many cases Police would get input from the knowledge of journalists and also journalists couldrely on information given by the police. Therefore, there was still a need for both parties to sit at one table and find a solution to their problems. He also appealed to the audience that for any abuse and violations committed, no one is above the law if taken to the court. The problem was that alleged perpetrators were not taken to court, he explained.

It was noted that many proprietors of media houses are not professional journalists, but people with private business interests. They are looking for profit from commercials or breaking news stories instead of fair and socially responsible reporting. It was pointed out that there are many radio stations or media houses whose owners represent a particular political party and therefore limit the access and coverage for the opposition. Media owners were asked not to interfere with the content of the media. Partisan selection of information through the media was referred by the National Coordinator of UMDF as a “death penalty” for serious journalism. He challenged media practitioners to strengthen their professionalism and responsibility.

One participant highlighted concerns over professions being regulated by government not themselves. The Minister asked the media to focus on training people for professionalism, to clearly define journalism as profession and to adopt better self regulatory mechanisms so that no state body would see the necessity for external regulation.

In her concluding remarks the Minister highlighted the need for the public to seek the help of the police and courts in the event of abuse and violations of rights of people and institutions. She also reminded the audience that the media could not be totally independent and that instead there should be a cooperation and collaboration between the state and media for purposes of regulation and ensuring quality standards. There was a need for media to respect, promote and protect the rights of other people so that these in turn could be promoters of media rights.

Rose Mary Kemigisha appealed to the media fraternity to practice responsible journalism such that it does not creates hostile relations with the audience that consume media outputs. She highlighted the duty and responsibility of the state to guarantee media freedom and emphasized that that control of media was unacceptable even though a certain degree of regulation was necessary.

The dialogue was welcomed as an important opportunity for debate and dialogue on the very controversial, timely and relevant issues of human rights for journalists. The presence of the Minister of Information and National Guidance, Deputy Inspector General of Police and the Spokesperson of the Uganda People’s Defence Forces not only gave the audience the chance to get the view of Ugandan government but also to raise and discuss their issues and concerns with its representatives. The active participation confirmed that there is a general interest in such debates on the side of media practitioners and human rights activists, although a stronger presence of state-institution representatives would have been desirable. 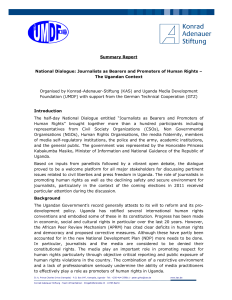 Public Dialogue: Journalists as Bearers and Promoters of Human Rights in Uganda 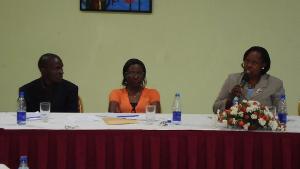