NUTRITION AND HEALTH ISSUES IN A UGANDAN REFUGEE SETTLEMENT COMMUNITY

According to the United Nations Refugee Agency (UNHCR), there is a clear link between nutrition and public health. Communicable diseases brought on in part by malnutrition are responsible for millions of preventable deaths each year. Mass population movements can result in high rates of malnutrition, sickness and death.
July 23, 2018 Ordering Information

Shortage of food also makes people more vulnerable to sexual abuse and exploitation. Poor quality diets and vitamin and mineral deficiencies contribute to delayed childhood development, causing irreparable damage. Additionally, for those who live with chronic illnesses, such as HIV/AIDS, adequate nutrition is vital in maintaining the immune system.

In this Q&A interview, Ms Claire Kamazooba a Nutritionist with Action Against Hunger, a non-government organization working in Bidibidi refugee settlement talks to us about the nutrition needs of refugees.

What is the importance of the concept of nutrition in relation to refugee women and children?

When populations cannot access adequate nutritious food for prolonged periods, they get malnourished and lives may consequently be lost. The impact of malnutrition on mortality and health are immediate, particularly among the most vulnerable groups (children, women and the elderly). Poor nutrition during pregnancy can lead to maternal mortality. Malnutrition can also worsen the health situation of people living with HIV as access to medication, healthcare and essential nutrition is interrupted. Poor nutrition can cause irreversible damage to a child’s growth and development and in the long term affect the entire generation of children where they are not able to reach full potential which leads to low national economic growth and development.

In what state do you find South Sudan refugees as far as nutrition and feeding requirements are concerned?

In humanitarian crises, changes are very rapid with people in need of nutritional support and food security. This is why malnutrition is a common consequence of conflict, emergency and fragile settings, affecting most the vulnerable groups (children, pregnant and lactating women). Long days and months of journeying to a peaceful location compromises the nutrition needs of refugees as there is no access to food, healthcare and safe water. The body uses up its reserves putting one at risk of malnutrition, infections, opportunistic diseases, serious public health threats and death due to reduced immunity. Action Against Hunger nutrition program in emergency situations aims at preventing malnutrition in the most vulnerable groups and treating acute malnutrition.

Any case examples of refugees you have worked on that quickly comes to mind?

In September 2016, we received a mother, Nensa Jama Suzan with her baby, Princess Christine. They were refugees from South Sudan. Nensa had lost her husband in the conflict and her first baby to an unknown medical condition. During the conflict, the situation in South Sudan became worse every passing day. She decided to flee. On arrival at Kiri border, after 10 days in transit, they were very hungry, feeling sick and tired.

Princess Christine was only 8 months old on arrival. Tests were done on both the mother and baby and both turned out positive. They were enrolled on treatment. The baby was diagnosed with Malaria and Severe Acute Malnutrition. She was immediately admitted into Inpatient Therapeutic Care for about two weeks. She was later discharged to Outpatient Therapeutic Care.

During the follow-ups, the mother reported that her baby vomited every after feeding. She was readmitted with severe Pneumonia and Severe Acute Malnutrition. The baby weighed 4.2kg. After close to three months of treatment and care, she weighed 6.6kg, a great improvement! She was breastfeeding and taking bean soup and porridge that we provided. Today she is healthy, has good appetite and plays with other kids. She weighs 19.3kgs at 28 months. Nensa enrolled for adult learning and has been supported to start her own business selling cassava pancakes in the local market.

The second case is Dina Kape’s, a mother of four including twins, Timethoe and Fastino. When war broke out in South Sudan, Kape was 7 months pregnant. Her husband decided they flee to Uganda. They spent close to 14 days moving with long hours of no food and water. On arrival at the Bidibidi reception center, Kape was immediately rushed to Bidibidi health center III maternity ward. Her twin babies were born premature. Timethoe and Fastino weighed 1.7kg and 1.3kg respectively and needed close monitoring. Kape was malnourished and complained that she did not produce enough breastmilk and that the babies could not suckle well.

The babies were put in intensive care. The mother was admitted for close to two months in our Infants and Young Child Feeding Corner. She received supplementary feeding rations on top of the general food ration provided to refugees. She also received postnatal care and education and counseling to relieve her of emotional stress, which had affected her breastmilk production. We also gave her water and sanitation items such as washing and bathing soap, basin, cups, plates, sanitary towel among others.

After three months, Kape and her babies were discharged. Her nutrition status had improved. The babies got immunized before they were discharged. Today Kape and her children are healthier and continue to benefit from the Maternal Child Health/Nutrition Program for all children under 2 years. Timethoe and Fastino currently weigh 10.5kg and 11.3kg respectively. She grows some food such as maize and beans in her small garden around her home.

What challenges do you face in meeting nutrition and feeding needs of refugees?

Language barrier, internal migrations of clients on treatment where refugees move from one zone or settlement to another, which disrupts our interventions in terms of follow up. We also lack enough funds to effectively implement projects.

What practical remedies do you think should be done to improve the nutrition and feeding situation of refugees?

This requires a multisectoral approach. On the part of government, there should be integration of nutrition guidelines and policies into the healthcare services provision. For example, every healthcare facility should have baby friendly facilities and services. Host and refugee communities need more knowledge on nutrition, maternal and child health. Such programs can be spearheaded by Civil society Organizations. Refugees should adopt healthier behaviors to avoid preventable diseases. They should for example embrace family planning as a way of improving child health and nutrition. And practices such as child marriages ought to be ended. The host communities should provide a friendly environment for refugees and share local resources. The UN and other donors should increase funding to sustain these program 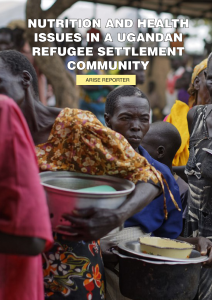