Ugandan government partners with KAS and GAIN-Uganda in civic education

Scalling up Civic Education in Uganda

With a great party in the KAS gardens, the DEMOCRACY WORKBOOK for civic education in Uganda was launched on Friday, 26th of May 2017. The second edition of the book is released by GAIN, KAS and the Ministry of Information, Communications Technology and National Guidance.
June 6, 2017 Ordering Information 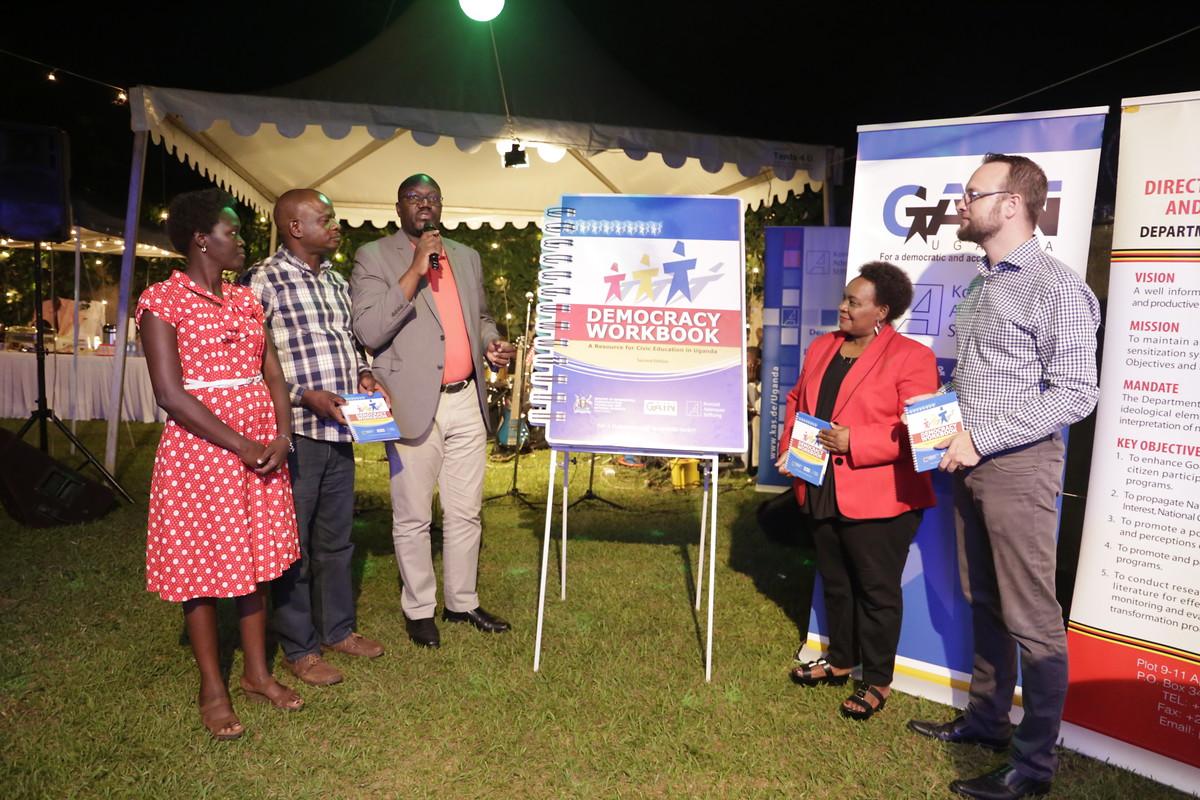 Despite the fact that Uganda has held 5 successive elections since 1996, civic education has been consistently neglected by the responsible bodies charged with that responsibility. This has always meant that towards the elections, a few election related messages are put out through various media and in the end it does not contribute to educating the masses on the rationale of the elections and why they should participate. The few efforts complimented by some development partners are also undertaken towards the elections thereby creating a void in the peoples’ quest for knowledge on how to effectively participate in governance matters of their country prior, during and after the elections. For this reason, GAIN Uganda would like to make civic education a continuous process that citizens should benefit from in order to empower them to engage effectively in decision making processes at their local levels.

Having identified this gap, The Governance Accountability Civil society network of Uganda (GAIN-Uganda) - a network of indigenous organizations in over 11 districts of Uganda undertook to develop civic education materials that would be easily consumed by the grassroots communities as well as urban communities across the four regions of Uganda. These have been piloted and found to be effective tools that can be used across board especially with regard to enlightening citizens about their roles and duties towards their country.

KAS, DNG and GAIN-Uganda joined efforts to develop the materials further in order to use them in reaching out to a wider audience among civil society and local leaders. The democracy workbook describes some key concepts that define democracy including highlighting pictorial descriptions of likely scenarios in everyday life with regard to citizen’s roles and participation in governance issues.

During a high level event organized at the KAS gardens to launch the democracy workbook, the Permanent Secretary in the ministry of Information, Communication Technology and National Guidance Mr. Vincent Bagiire lauded the efforts by KAS to promote civic education to the level of going to grassroots. He noted that in this era of technology, it is important for citizens to be aware of their duties in order to minimize the burden they heap on to their leaders. He also noted the importance of having an informed citizenry who are able to hold their leaders to account. Mr. Bagiire re-emphasized the commitment of the Ministry of ICT&NG and government to continue supporting measures such as these. He challenged KAS to think about developing an all-encompassing material which would easily appeal to all the political parties so that it becomes easy to use the political parties as vehicles to further conduct and promote civic education.

The KAS Country Director Mathias Kamp thanked GAIN-Uganda for choosing to become the beacon of hope in their districts by promoting accountable leadership and enhancing citizen participation in the governance of their respective areas. He noted that if this effort is scaled up to cover more districts, the level of civic engagement will increase hence increasing the level of citizen participation. Mr. Kamp recognized the role played by KAS’s institutional partner ACFODE in making GAIN-Uganda what it is now

Nicholas Opiyo, the Executive Director of Chapter Four Uganda and recipient of the prestigious German Africa award 2017 talked about the importance of enlightened citizenship pointing out that it is in the best interest of every actor to have an enlightened citizenship. He challenged the government bodies like the Human Rights Commission, Electoral Commission and other organs charged with the responsibility to conduct civic education to treat civic education as an important and integral part of building a democracy that should be prioritized. He noted that citizens cannot be interested in politics if they are going hungry. Going hungry on the part of citizens could mean that there is a challenge that government has not been able to identify and address because there is a wide gap between citizens and their leaders. This he noted with concern to be one of the biggest challenges that leaders exploit to dodge being accountable to the people they lead. He concluded by challenging people to stop taking elections as the only important aspect of a democracy because in many cases elections have not brought leaders who were voted by the majority. In conclusion, civic education can be one sure avenue to increasing citizen awareness and engagement in building our nation Uganda; this will surly increase accountability measures and in a way compel those who hold leadership roles to get out of their comfort zones.