The prevention of extremism was discussed in a high level round table discussion organised by the Konrad-Adenauer-Stiftung on Thursday 6th April 2017, with the intention to initiate dialogue series on effective ways to counter the radicalization of the Society. Special focus was put on the role of the state and religion.
April 12, 2017 Ordering Information 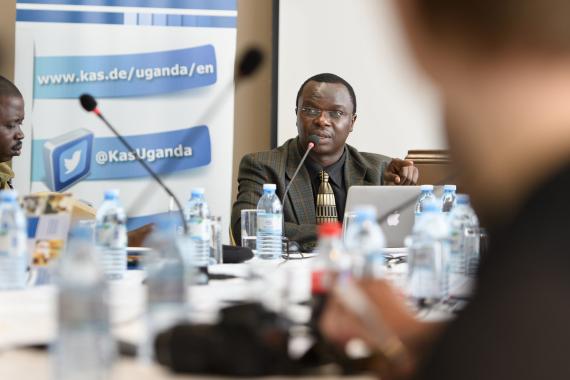 The threat by extremist tendencies has not left Uganda apart, especially as some developments specific to the country’s society are posing challenges to the diversity and religious tolerance in the country, as well as its security situation. Uganda is not off the terrorists’ radar and is far from being immune to foreign terrorist organizations operating, and possibly recruiting. Additionally, the country has suffered LRA’s terror in the northern parts of Uganda. With increasing intra-religious and inter-religious contestations the risk of extremism is growing continuously.

The discussion was graced by both state and non-state actors including participants from the different religious sects, security and law enforcement, parliament, civil society representatives, development partners and academia.

Dr. Ashad Sentongo an expert on genocide and mass atrocity prevention gave the keynote address where explained he in very precise words, that the causes of extremism are not religions but the structural violence that influences the whole society. While the causes often lay in socio-economic or political structures that discriminate certain groups of people, religion becomes a tool for identification and provides a feeling of belonging for those who are discriminated against. In a multi-cultural, multi-religious society like Uganda, people tend to compare each other in terms of their identities. In Uganda ethnic structures are overlaying political structures and therefore are dominating the society. Ashad defines this as structural violence which does not allow people to experience the same benefits as others. Extremism can become one outcome of the permanent confrontation of those different religious, cultural or ethnic groups. Dr. Ashad asked participants to look at these causes of extremism and to run an extra-mile to address the underlying issues. This is needed in order to prevent rather than just react to extremism. In addition he wanted the participants to think about new ways to think and talk about extremism and its prevention as it is obvious that previous traditional strategies have failed to succeed all over the world.

Following this inspiring thought provoking presentation, the panelists were each asked to discuss the topic. Dr. Max Ngabirano Dean of School of Humanities at Uganda Martyrs University Nkozi warns that religious groups more often tend to define their own groups at the expense of other groups. Other groups are demonized and communities become fragmented. Fanatic religious groups then want to gain advantage over the other groups and start to fight for it. This can result in extremism. Preventive measures would be more effective in curbing radicalization tendencies. The state in a bid to prevent extremism should consider addressing the political, socio economic and religious issues of the various groupings in order for them not to feel marginalized. This will help avert the initial thoughts of people feeling excluded therefore attempting to find identity. Dr Ashad further used the analogy of a mirror to explain why some people may feel not part of the bigger body politic. He asserted should be like a mirror, once you don’t see yourself in the mirror then it is either broken or non-functional thus not serving the purpose for which it was made. Likewise, extremist tendencies are born out of the feel that certain groups do not see themselves as part of the bigger society thus giving them reason to create their own identity.

Ahmed Hadji a survivor of the twin bombings at the Kyadondo rugby club gave insights into the practical work of peacebuilding and prevention of violence. Like the other speakers, he emphasizes the importance of structural conditions and human relations as the cause of extremism. While religion is exploited by extremists, it is viewed as soft spot especially to a people that feel marginalized and lost identity. In addition he regretted the misunderstanding of Islam which has led to the demonization of Muslim people. This argued would lead to a loss of important allies in the fight against the extremism especially among the Muslims. He called out government to work closely with the Muslim leaders as well as other religious leaders in order to address some of the underlying causes of extremism. Hadji noted that he is optimistic that in Uganda it is still possible to avoid extremist tendencies blowing out of proportion but only if the state coordinates all the key players well and in good time including reaching out to the grassroots where the vulnerability levels are highest.

Lina Zedriga approached the subject from a women’s perspective pointing out the missing link. She noted that women are often not taken serious especially when it comes to peacebuilding and stabilizing the society. She noted that women have a calming effect that can be useful in reducing extremism tendencies. She lashed at people who view women as victims rather than agents of peace building and societal stabilization.

The perspective of a government related security expert was presented by Hon. Simon Mulongo, who asked himself, what the state should do differently in order to counter extremism more effectively. He pointed out the need for government to improve the investigative capacity and arm of security to cover the different segments of society like youth, religious groups and different movements and their intentions. Therefore the different institutions who work on the prevention against terrorism should be re-directed to be capable of prevention and not just reaction to extremists.

Ibin Ssenkumbi from the Uganda Police Force (UPF) explained how the Ugandan Police Force is countering terrorism. He explained that despite the complexity involved in countering terrorism, the different agencies involved in prevention and countering terrorism were doing their best. He pointed that this fight can only be successful if everybody is involved and plays a part. He said that much as government should take lead on all these efforts, he noted that more could be done. He pointed the dangers of people abusing religion for their own ill intentions that eventually breed extremism and terrorism. Furthermore he asked the participants to critically think of the definition of extremism and their diverse forms. He especially questioned the popular posturing of extremism as religious extremism which seems to be mostly concerning only the Islam.

There were various opinions from the participants most of whom pointed out the weaknesses in countering terrorism and extremism. They emphasized that religion is a tool that often is hijacked by some few elements in society to perpetuate extremism. They called for continued discussions about this topic and lauded KAS for creating spaces such as this where key topical issues would be discussed. There is a general feeling that with continued discussions about extremism, it is possible to prevent its adverse consequences.

The KAS Country Representative Mathias Kamp thanked participants for finding it worth to talk about prevention of extremism. He noted that we did not have to wait for full blown extremism in order for us to talk about prevention. He challenged participants to imagine the situation in Somolia and other places that have been affected by extremism. Mr. Kamp pledged to continue supporting discussions such these but further challenged the scholars, experts, and the security agencies to think about concrete action areas that can be addressed such that such discussions can be specific ad targeted. He asked development agencies present to think about mechanisms of working together to take this message even to the lowest levels.