High-Level Roundtable Discussion organized by the Konrad-Adenauer-Stiftung (KAS) in Uganda in cooperation with the African Centre for Trade and Development (ACTADE).
November 4, 2011 Ordering Information 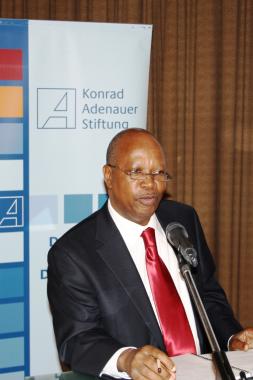 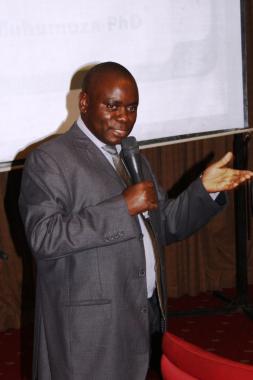 Dr. Fred Muhumuza, Research Fellow at the EPRC and Economic Advisor in the Ministry of Finance 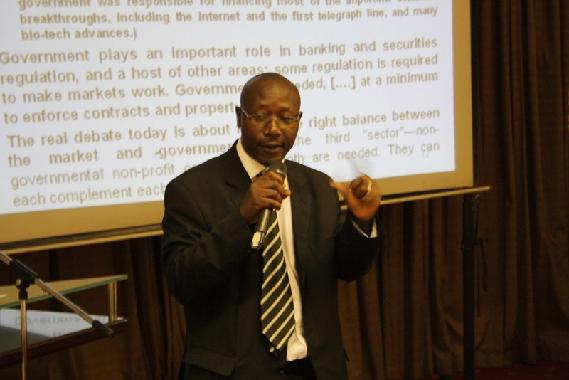 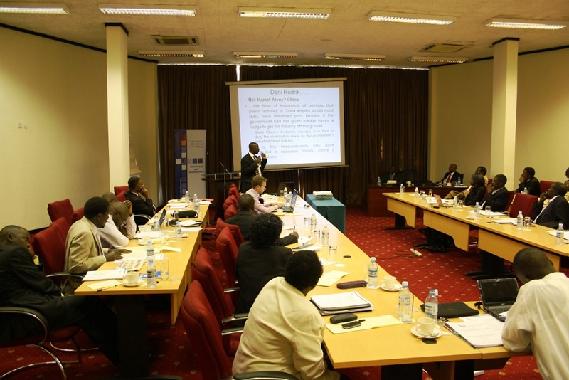 Participants of the roundtable discussion 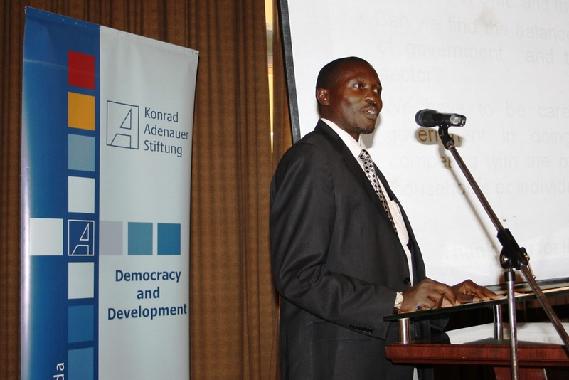 The African Centre for Trade and Development (ACTADE) held a high-level roundtable discussion at the Serena Conference Centre in Kampala to kick-off a series of events on Social Market Economy organised with the support of KAS. This was the first KAS supported event organized by ACTADE and it marked the beginning of the cooperation between both organizations in promoting ideas of Social Market Economy in Uganda.

The moderator of the event, Mr. Gawaya Tegulle welcomed the participants of the round-table discussion and started a round of introductions in order to acquaint the participants with each other. Afterwards Dr. Bonny Kyaligonza (ACTADE) and Mathias Kamp (KAS) welcomed the participants and gave a quick overview of the work of their respective organisations. Mr. Kamp emphasised that this was the first event organised by ACTADE and KAS and that ACTADE would gradually take the lead role in organising future events.

Subsequently Longino Tisasirana of the National Planning Authority offered his opening remarks to start the round-table discussion. He emphasised that the Ugandan economy had mainly seen stabilisation efforts for the last 20 years and gave an overview of the economic policies of the last decades. He closed his remarks with a call for reviewing the liberalisation efforts in Uganda and praised China’s planning of its economic development.

Next Dr. Fred Muhumuza of the Economic Policy Research Centre at Makerere University presented his views on the topic. He told the audience that there had been some improvement of poverty levels in Uganda, but that the absolute numbers and the overall economic inequality were still problematic. He introduced the most important factors of a Social Market Economy and gave an overview how these principles could further economic development in Uganda, if applied correctly.

Afterwards Elly Twineyo of ACTADE reviewed the presentation. He warned that the contribution of the agricultural sector to the GDP of Uganda is declining while it still offers labour for 70 per-cent of the population. He thus called for quality investments in agriculture and the furthering of exports to neighbouring countries. He closed his remarks by stating that a government role was needed in the economy and cited China as an example for successful government involvement in the economy.

The floor was now opened to the participants of the round-table. Comments from the participants pointed out that some Social Market Economy aspects were already in place in Uganda but were implemented too haphazardly. They called for the inclusion of cooperatives in the national development plans and an approach generally tailored towards the needs of the people. Federalism was discussed as an alternative to promote economic policies that are closer to the people. Several participants pointed out that the prevalent corruption and the lack of core-values were hindering economic development in Uganda.

The event was then closed with final remarks by Sam Wanyaka, Director of the Parliamentary Budget Office. He emphasised that there is a window of opportunity to market ideas connected to Social Market Economy to the Parliament as the MPs are currently keen to deliver on economic development.