PROTECTING FEMALE REFUGEES AGAINST SEXUAL AND GENDER BASED VIOLENCE

Sexual and gender-based violence (SGBV) isendemic among the refugee communities,largely because of the patriarchal societythey come from. The January 2018statistics from World Vision Uganda’s West NileRefugee Response Situation showed that 82% ofSouth Sudanese refugees in Uganda are womenand children, and because of their disadvantagedposition in society, they face more risks of abusethan their male counterparts.
July 23, 2018 Ordering Information

The high numbers of registered cases of GBV,

besides being alarming, indicate that the culture

of remaining silent in the face of abuse is

Settlement, Adumani says that the cases of

GBV, once reported to social workers, are given

medical treatment and in the case of defilement

and rape, the police take up the cases. They

and prosecute them,” says Garang. The survivors

are also given psychosocial support.

opportunities. This is in addition to adequate

funding from mainly the government and the

Refugees require social services. “When we

had just come to the settlement, UNHCR

used to provide, to satisfaction, food

the government needs to come up with

ways to help households with incomegenerating

activities to supplement the

not only restore the refugees’ dignity but

of households and reduces instances of

economic exploitation of women and other

Survivors of GBV may also be relocated in

case the perpetrator is a husband or parent.

work. For instance, Agojo Police Post in Agojo Refugee Settlement in Ciforo, Adjumani is run by three police officers, who are supposed to follow up on criminal cases in the 8,000-people strong settlement. The deputy in charge of the police post, Special Police Constable Sarah Agenia, agrees that her challenge is manpower.

“To address this challenge, we always sensitise refugees, especially women and girls, to move in groups to avoid abuse. We have also introduced community policing using the refugee welfare council systems to ensure that SGBV cases are identified and addressed.”

To address the capacity challenges, the Office of the Prime Minister (OPM) and UNHCR have provided some police posts with vehicles and motorcycles to enhance their patrol capacity within the settlements. However, more needs to be done. There should, for example, be timely mobile court sessions within the settlements to deal with cases of violence.

According to Eceru, humanitarian agencies working in refugee settlements have male champions selected through participatory processes. Their role is to raise awareness about GBV and its consequences. This ought to be extended to host communities to involve community and religious leaders, businessmen and politicians, to speak out against GBV.

Social workers need to continuously create awareness about the dangers of SGBV both to the survivor and the entire community.

Irene Kagoya, the Country Manager, advocacy and influencing, Plan International Uganda says, “There is need for concerted efforts and an integrated approach from all stakeholders to commit to gender-responsive safeguards for all women and girls from all forms of GBV. This requires placing gender factors at the centre of all interventions and/or services in the settlements and host communities.”

Referral mechanisms for the management of SGBV also need to be strengthened to ensure that survivors receive appropriate response and care services. They should receive counselling both individually and in support groups to develop resilience and positive coping mechanisms.

The role of government

Under international law, refugee women are entitled to protection from any form of violence and discrimination and the State has an obligation under several human rights instruments to adopt measures towards the elimination of violence against refugee women.

Uganda ratified the 1951 Convention Relating to the Status of Refugees and the 1967 Optional Protocol of the Convention, which states that refugees and asylum seekers are entitled to the enjoyment of the rights enshrined in the International Human Rights Conventions. Chapter 29 of the Refugee Act, 2006, stipulates that refugees are entitled to free and just treatment without discrimination on the grounds of race, religion, sex, nationality and ethnic identity.

Uganda together with UNHCR, in 2016 developed a 5-year SGBV Interagency Country Strategy premised on the vision of ‘a community free from SGBV’. On October 3, 2016, the UN General Assembly that Uganda had chaired for two years, made a declaration, the New York Declaration that stated among others, “We will ensure that our responses to large movements of refugees and migrants mainstream a gender perspective, promote gender equality and the empowerment of all women and girls and fully respect and protect the human rights of women and girls. We will combat sexual and gender-based violence to the greatest extent possible.”

Uganda is thus obliged to take deliberate efforts to stop GBV against women and girls through among others strengthening the referral mechanism in refugee settlements, bringing services, such as, sexual and reproductive health services closer to the people and enhancing the capacities of the community protection committees in refugee settlements to prevent and respond to GBV cases. 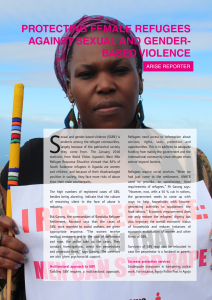