REGIONAL YOUTH DEBATE: WHEN THE DEMOGRAPHIC ADVANTAGE IS NOT BEING TRANSLATED INTO POLITICAL POWER

On the 8th of January, an enthusiastic discussion at Busitema University with University students from Eastern Uganda Universities interrogating whether or not political parties are providing the right platform for youth participation in politics started the 2017 Regional Debate Series, a project co-implemented with the University Forum on Governance (UNIFOG).
February 10, 2017 Ordering Information 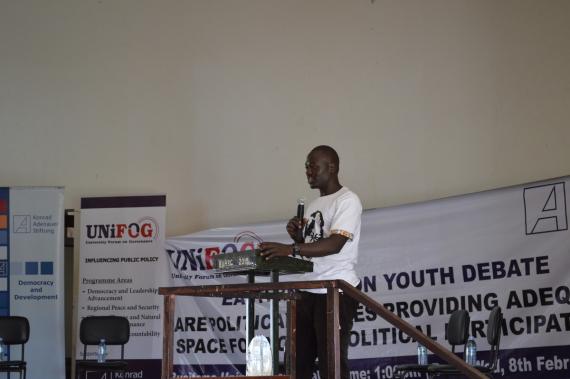 The audience consisted of interested young leaders and students from universities as well as political and civic organizations within the eastern region. The debate aimed at constructively contributing towards structural change whereby the voices of young women and men count in governance and decision-making processes. In order to analyze the binding constraints to youth political participation and to build awareness among the youth on how their political parties can engage them more constructively, the debate took a moderated panel structure with committed audience engagement.

As the discussion pointed out, Uganda is one of the countries with the youngest population. In terms of electoral participation, the youth contributed nearly half of the registered voters. But even with this numerical strength, youth still face challenges in participating in the politics of their country.

Therefore public policies have to respond to the several challenges faced by young people such as, unemployment and limited access to quality education. Despite several institutional provisions for youth inclusion in politics and decision-making processes (like youths representation in parliament, local councils, etc.) youth participation remains – compared to the demographic facts – marginal. In the words of Abubakar Matanda, one of the expert discussants, “our demographic advantage is not being translated into political power”.

Political parties also have the role to recruit and nurture political personnel in an effort to build the future generation leaders. They are meant to create political space for the youth and support them through the process of becoming effective leaders. In an effort to build the young generation of leaders, political parties have moved to create youth wings alongside their mainstream leadership. However, the integration of the political party youth wings with the mainstream leadership remains unclear. But a party which doesn’t integrate youth will sooner or later vanish from the political arena. Hence Political parties should adequately engage their members through civic education to attract more youth into politics.