“You represent the youth. You are important.”

Between 27th February and 1st March elected youth leaders met in Kitgum district for a training organized by the National Youth Council (NYC) and Konrad-Adenauer-Stiftung (KAS). The participants were trained and sensitized about the foundations of their work and discussed their own contribution to regional development.
March 5, 2019 Ordering Information 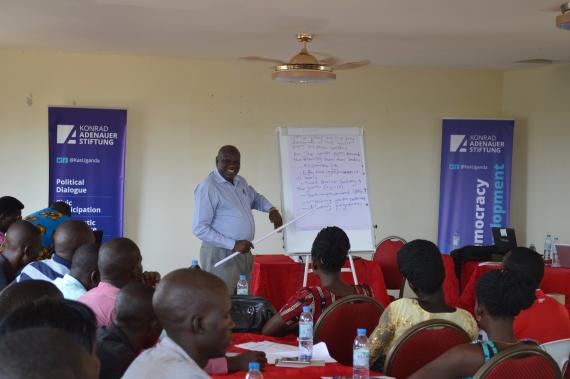 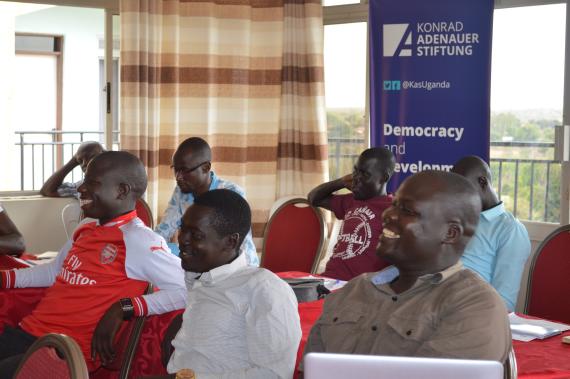 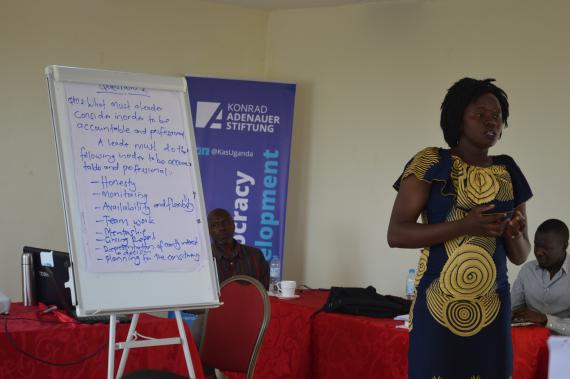 Participants presented the results of their group work 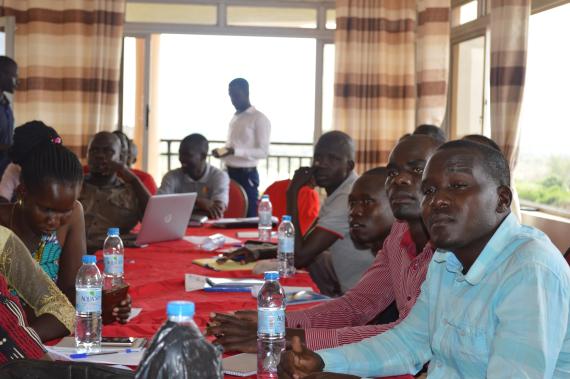 The role of youth empowerment and participation is being emphasized all around the world. Especially in Uganda, by now probably the youngest country in the world, the importance of the youth is undeniable. Even though, political participation and political influence remain low. In cooperation the National Youth Council (NYC) and KAS organised a workshop in Kitgum to tackle this problem. The Youth Leader’s Capacity Enhancement Workshop brought elected, regional youth representatives from the Acholi sub region together.

The youth leaders were invited to the workshop to equip them with additional knowledge and critical discussions on the foundations of democracy and good leadership as well as an opportunity for networking between the different youth leaders. The training opportunity was meant to horn the participants’ leadership skills and understanding of democratic foundations.

To ensure fruitful future work by the youth leaders, the participants were first reminded of their value and potential influence, to encourage positive engagement. Hence, KAS Country Representative Mathias Kamp told the audience: “Don’t let others tell you who is important and who is not. Because you represent the youth, you are important.”

The youth leaders discussed the different foundations of democracy; In this context, not only the value and importance of democracy were emphasized, but also the vulnerability of democracy, and therefore the significance of continuous contribution to democracy through participation and a fair competition in the sense of democracy. Dr. Yasin Olum went further in detail to explain the value of accountability, representation, rule of law and participation to the youth leaders while emphasizing the importance of engaging actively wherever they can. “If you don’t engage in politics and get left behind, don’t blame anyone but yourself.”

Lillian Aber, chairperson of NYC also contributed to the participants’ democracy understanding. In an enlightening speech she highlighted the importance of representation. After the audience agreed that good representation is a main characteristic for a good political leader, the attention Lillian Aber received was high as she reminded everyone that “as a leader you have to be sensitive. Everyone must be treated as equal.” In recognition of the presented information, the participants started discussing the democratic values, especially representation. Although, there was a broad consensus about the importance of representing the interest of voters effectively, opinions differed on how this can be achieved. During these intense discussions, it was clearly visible that the participants did not just repeat the words they just heard, but that there was a critical engagement with the content as some of the youth leaders displayed a good understanding of the issues, while describing the issues in their very own words.

By the end of the third day, the workshop had successfully contributed to the young leaders. During the discussions on the last day, the participants showed an increased knowledge of democratic values and strong acknowledgement of these as they emphasized the importance of such. Additionally, they formulated their own positions on good leadership.. Also, demanding it from themselves, the group spoke about the significance of honesty, accountability and transparency of political leaders.

Having one eye on the relevance of ideas for local development, the importance of inspiration and the ability to inspire others had been elevated. This became also clear during a debate about gender and the role of women. After the discussion, Dr. Olum concluded that women’ power relations, access to power and representation in parliament must be improved. The youth leaders agreed on an improvement of education and lobbying for women. With this mission the youth leaders were finally sent back to their daily work, now better prepared for an improved engagement in their local politics.