Workshop for Journalists in Juba

KAS in partnership with the Association for Media Development in South Sudan (AMDISS) successfully held a four day training for journalists in South Sudan from 23 to 27 November 2015. Focusing on the role of the media in nation building and the promotion of sustainable peace in the world’s newest state, the media practitioners were skeptical about the government’s commitment to protect and promote the media in South Sudan. They called on their government to assure them of protection and also demonstrate to the media fraternity that they are a relevant player in the rebuilding of their country.
December 9, 2015 Ordering Information 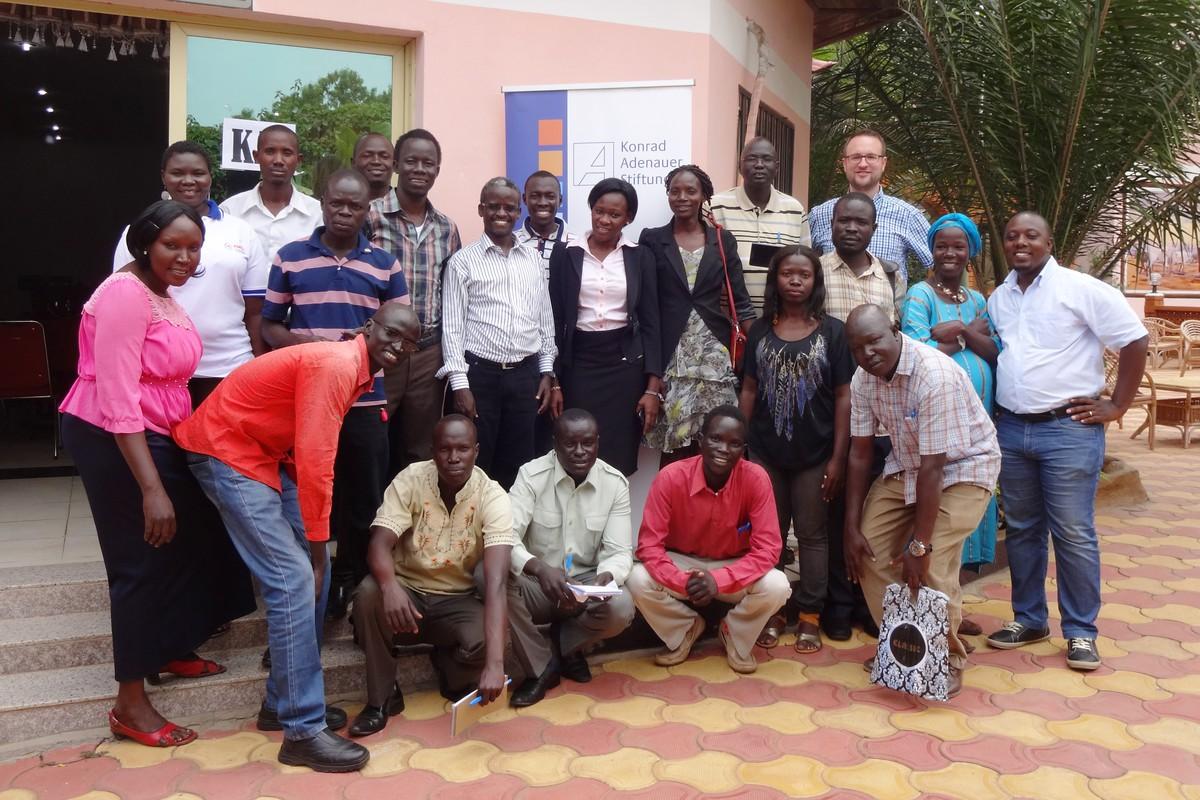 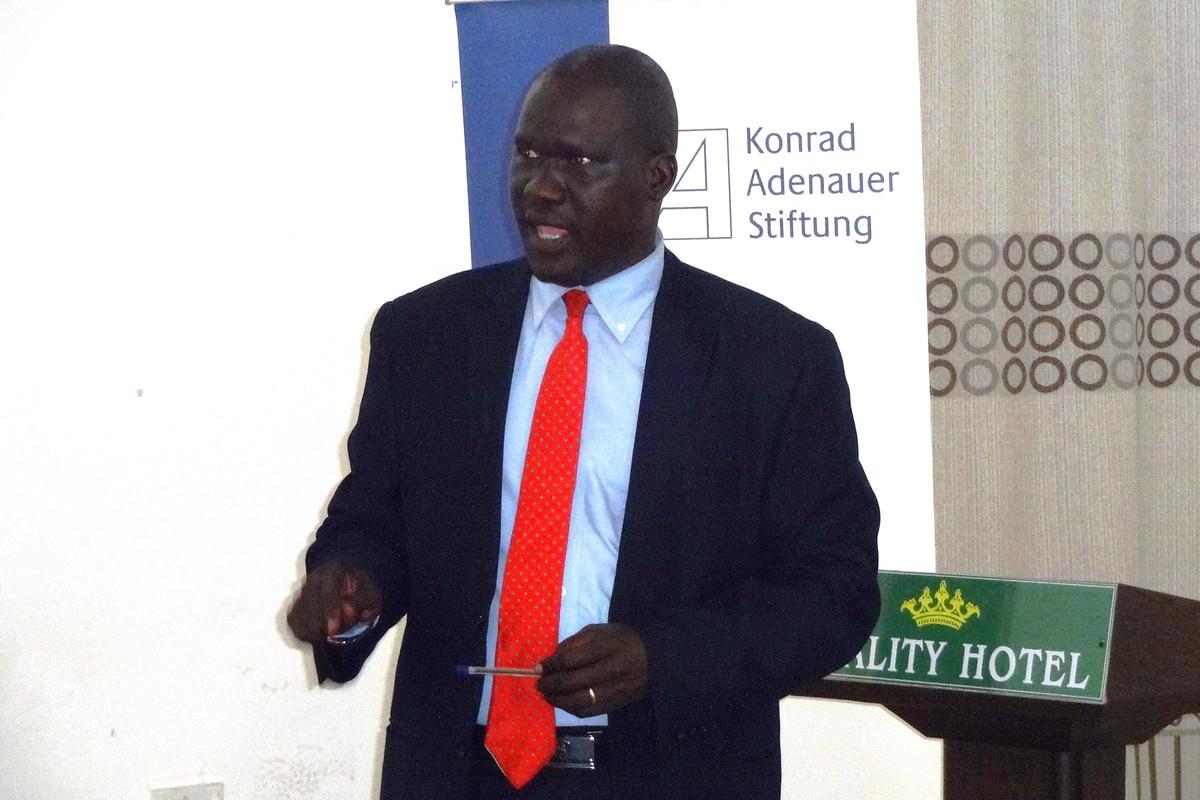 Justin Aleer De-Mayen, Undersecretary of the Ministry of Information, addresses the participants and answers their questions. 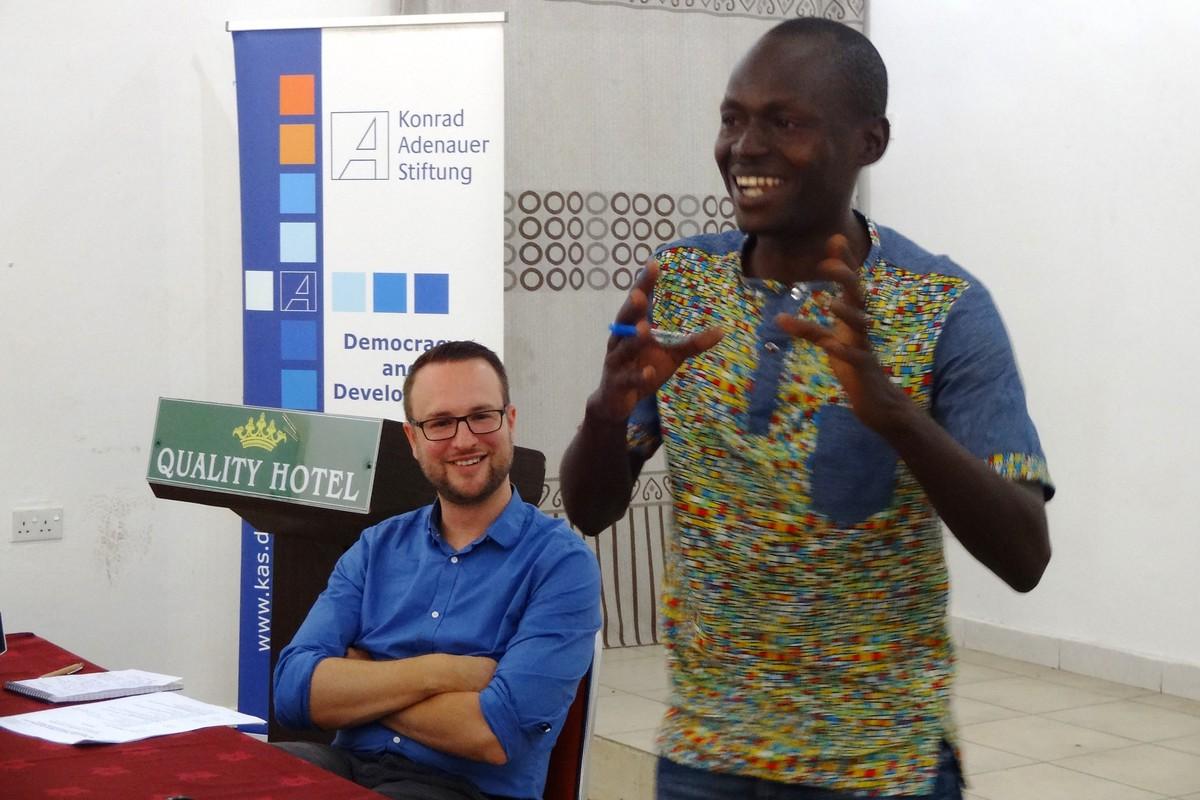 Mathias Kamp, KAS Country Representative, and Moses Odokonyero, one of the facilitators of the workshop. 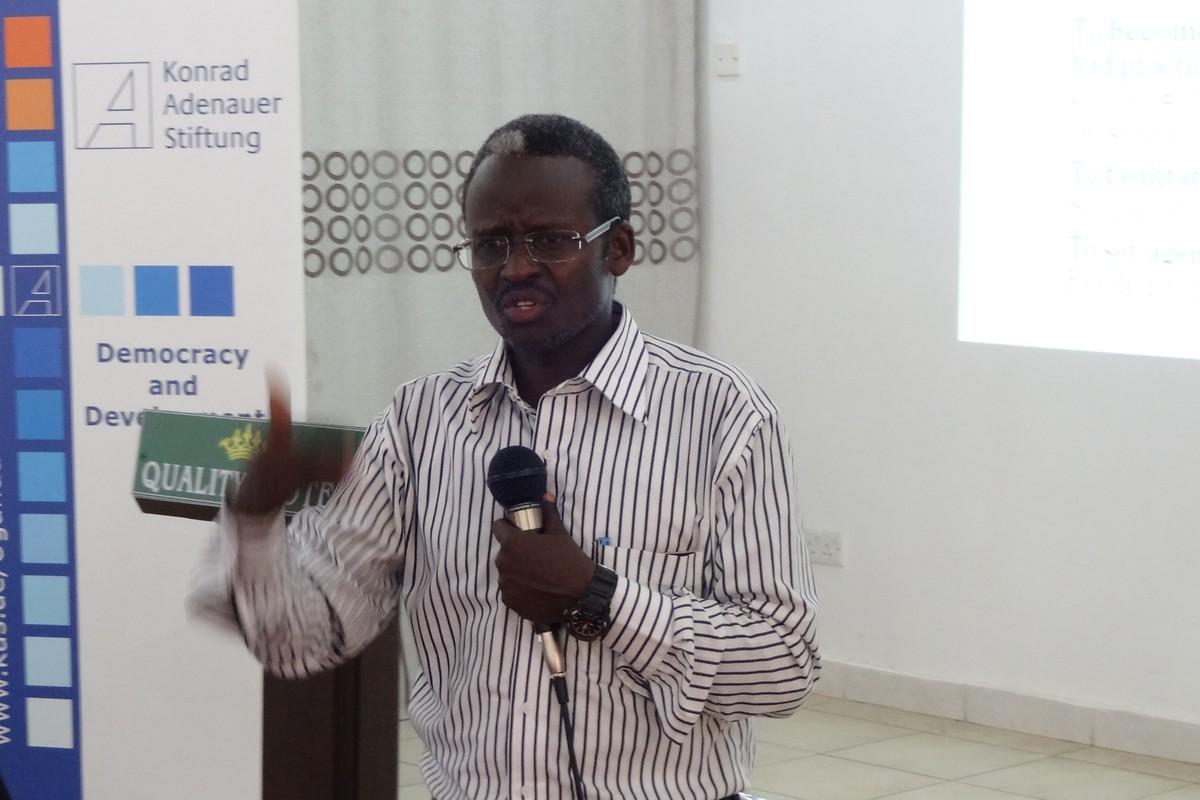 Dr. William Tayeebwa, the other facilitator of the Workshop and Head of the Department for Mass Communication at Makerere University.

In the last half of November, KAS organized a dialogue with journalists from South Sudan to discuss possible strategies for nation building and promotion of sustainable peace in the world’s newest state at Juba Quality Hotel. Dr. William Tayebwa, Head of Department of Mass communication in Makerere University and Moses Odokonyero, a freelance journalist with experience in conflict sensitive reporting facilitated the workshop. The workshop tackled a number of topics including, the role of the media in nation building, peace promotion and good governance, ethical standards in professional journalism, conflict sensitive reporting, investigative journalism, media strategizing and alliance building in conflict sensitive environments, social media reporting and networking among others. The meeting further provided a platform for the journalists to interact with relevant government agencies like the ministry of information and broadcasting. The facilitators shared their experiences in conflict sensitive reporting in similar sensitive environments in East Africa.

In his opening remarks, Mr. Mathias Kamp, the Country Representative of the Konrad-Adenauer-Stiftung, welcomed all the participants and explained the rationale of the workshop. He emphasized that this would not be a parachute approach of training but rather an interaction and dialogue that would allow for experience sharing and peer learning of best practices among the journalists. He highlighted the role of media in accelerating the peace process depending on how they decided to conduct themselves. Mr. Kamp urged the journalists to be balanced and professional in the way they report especially on politically sensitive issues.

Aware of the long and diverse history of the South Sudanese, Dr. William Hai Zaza, Head of Department of Mass Communication at Juba University, chronicled the rich historical background that the people of South Sudan share. He noted that had it not been for the short memory of the South Sudanese, they would draw back on their history, reflect on how interconnected they were and probably reach an understanding to peacefully resolve their differences and live harmoniously. Further drawing on the natural resource base of South Sudan, Dr. Hai Zaza noted that the newest state in the world had so many minerals and virgin fertile soils which had not been tapped at all yet, so a lot of pressure is being exerted on the oil resource which was just a small percentage of the riches of South Sudan. He urged the media to expose politicians who harbored what he termed a “Double Hangover” for violence and war and did not allow the world’s newest state to move forward. Dr. William concluded by calling on the media to play their role in influencing government, the market, and the non-state actors to bring about sustainable peace and development in South Sudan.

Mr. Oliver Modi, chairman of the Union of Journalists of South Sudan (UJOSS) underscored the importance of the media in uniting their country. He commended KAS for the training, urging journalists to take serious the interventions brought by KAS because he had been a beneficiary of KAS trainings and programmes over the years.

Representing the government, Mr. Justin Alee de Mayen, the Undersecretary of the Ministry of Information and Broadcasting, thanked KAS for training the journalists in South Sudan on the important topic of nation building. He noted that there had been a rift between the media and government arising out of a misunderstanding during and after the December attempted coup. The Undersecretary appealed to the media fraternity in South Sudan to be calm and understanding because the government was doing all that is possible to normalize the relationship with the media, arguing that it was a work in progress. He alluded to the fact that the country had come from far and still had a long way to go and that was why everybody’s effort towards rebuilding South Sudan were welcome. He noted that like any other system, there were always some bad elements; likewise, the army too was not exceptional and constituted of high illiteracy levels estimated at 85% .He advised that, should any media person find him/herself in trouble with the security, the first thing they should do was be calm and try to answer all the officers’ questions. This, he argued, would make the soldiers feel respected and they most likely would not consider the journalist “disobedient”. He promised that despite the hurdles and context of conflict, the country would return to normalcy. He requested KAS to further help facilitate dialogue between the media, government, and the armed forces in a bid to improve communication and streamline their working relations.

The four day workshop ended with a call unto the media in South Sudan to exercise refrain and know their limits when reporting. Journalists concurred that sometimes they reported what was not important for their nation and thus did not benefit the new nation.

Some of the action points from the four day interaction with the journalists include:

a resolve to work together as journalists,

Joining the umbrella bodies for journalists for instance UJOSS and AMDISS,

Engaging the ministry of information to provide the necessary information for media houses in order to reduce on the level of inaccurate reporting, and

Exercising a high degree of professionalism and making sure that the journalists report balanced opinion and stories.