The Konrad-Adenauer-Stiftung in conjunction with Action for Development (ACFODE) implemented the third in a series of workshops across the country, that aim at preparing aspiring women leaders to ready them for participation in the 2016 elections. The idea is to empower and motivate more women to run and enable them to effectively and efficiently campaign for themselves.The third workshop took place in the Eastern Uganda District of Pallisa from the 7th to the 10th of July 2015, at Kasodo and Butebo Sub-County Headquarters.
July 24, 2015 Ordering Information 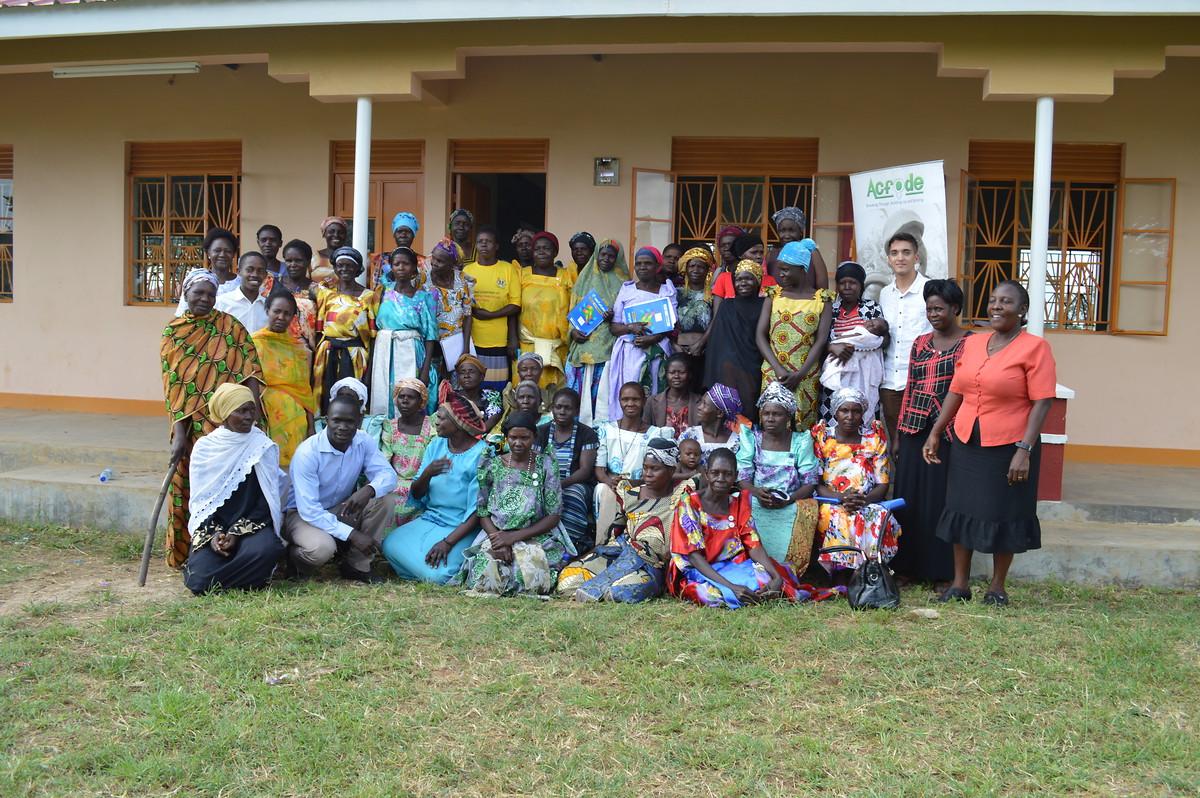 A group photo of the participants and some of the facilitators 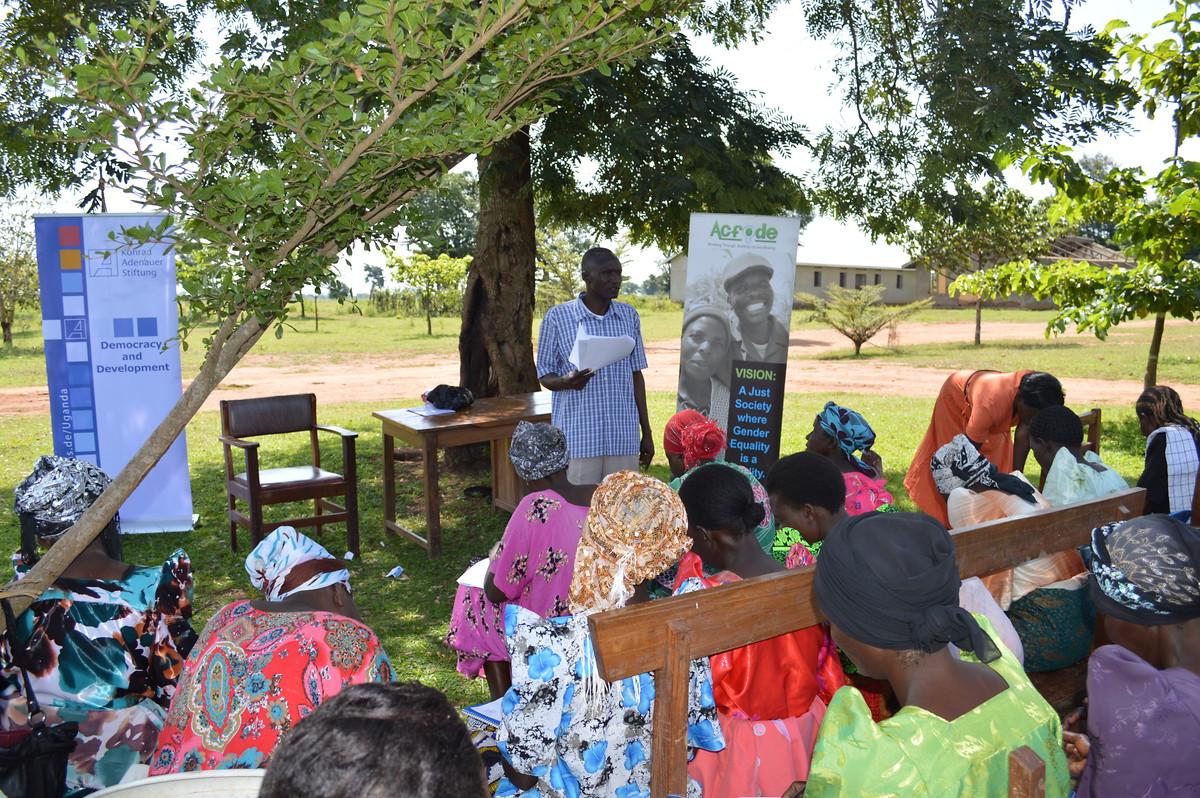 One of the facilitators, Mr. Peter Euspan representing the District Registrar addresses the participants 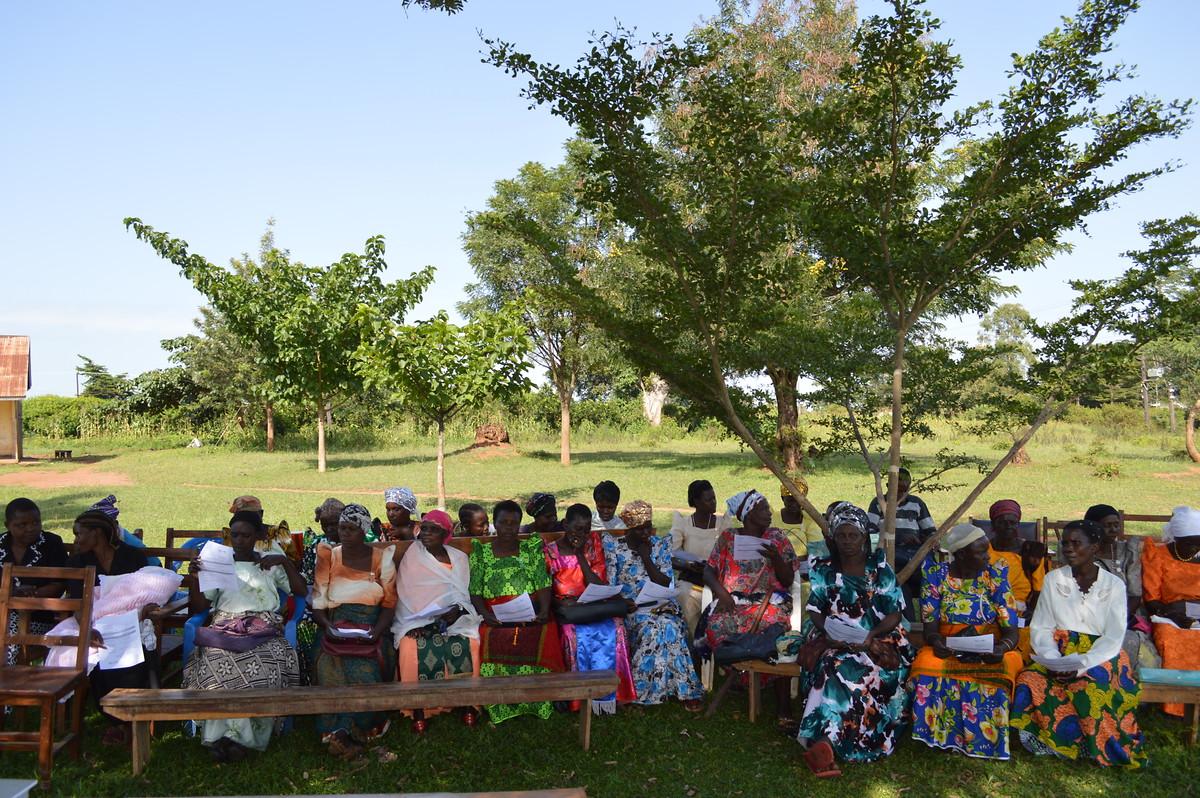 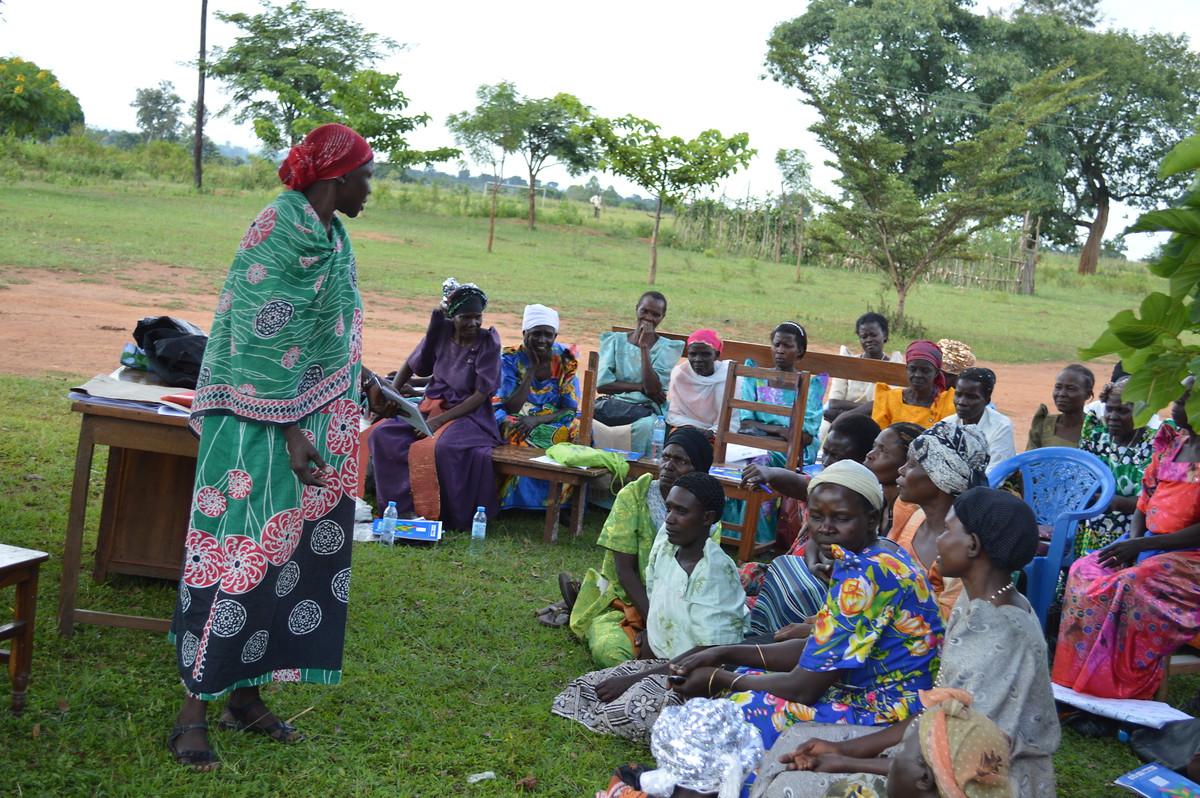 One of the participants doing mock-campaigning with the rest of the women as her public audience. This was to see if the women had mastered some of the skills of public campaigning, in this case, addressing a public rally. 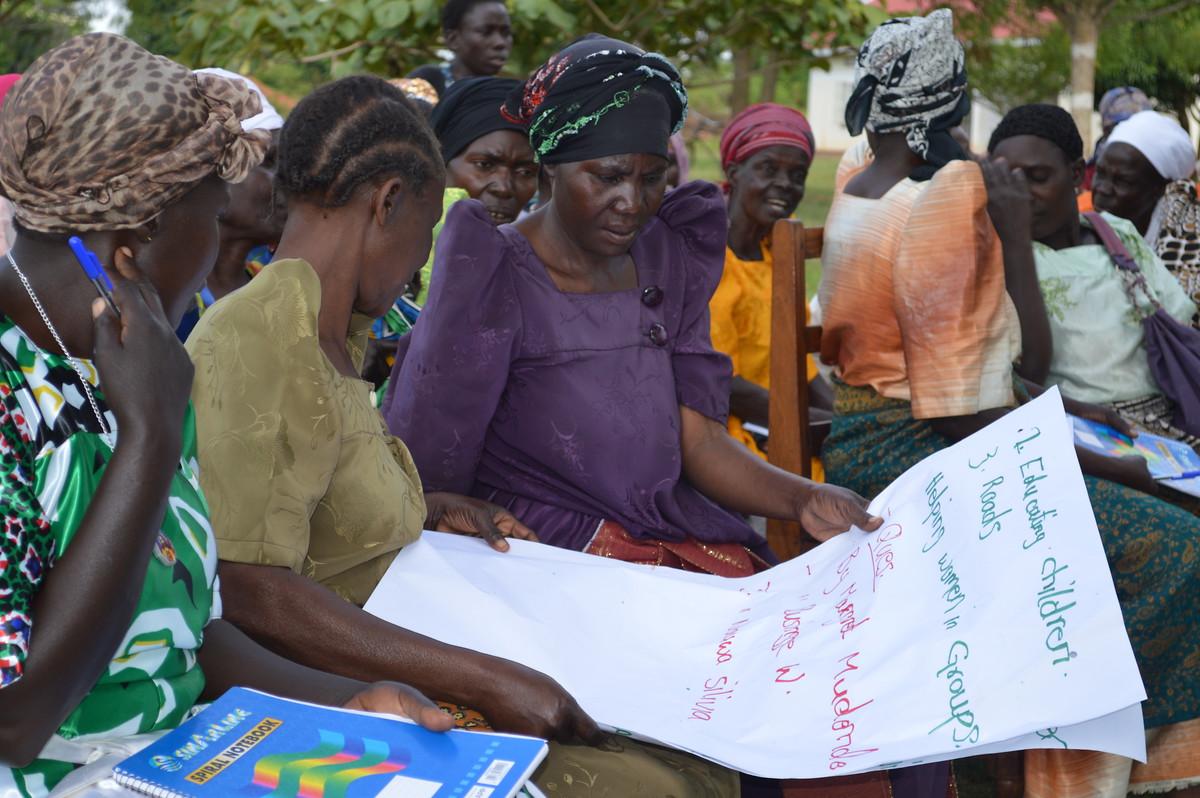 One of the groups in one of the breakaway sessions discussing on how to overcome some of the challenges that are faced by women in their quest to participate in political processes.

The workshop was opened by Ms. Belinda Kyomuhendo, the Programme Assistant at ACFODE, thanking the women participants for agreeing to be part of this workshop, which she said was a testimony of their enthusiasm to assume leadership of their respective localities. She also thanked the Konrad-Adenauer-Stiftung for agreeing to partner with ACFODE to facilitate this training. She noted that over the two days, participants were going to be taken through the requisite processes in the lead up to the 2016 elections: how to craft and package their messages to voters, how to put together and run an efficient and effective campaign, and what the Electoral Commission expected of them as candidates, among other issues. She thus welcomed Mr. Peter Euspan from the office of the Pallisa District Registrar, to take the participants through the Electoral Commission roadmap for the 2016 elections.

Mr. Euspan commenced his presentation by highlighting the constitutional mandate of the Electoral Commission provided in Article 61 of the 1995 constitution which is to organize, conduct and supervise regular, free, fair and transparent elections and referenda in an independent, impartial, efficient, transparent, and professional manner.

He noted that the electoral roadmap was already underway, and that next on the roadmap was the exercise of displaying the National Voters’ register at polling centers, which would take place from July 22nd to August 11th 2015. He called upon participants to go and verify whether their particulars appeared correctly on the voters’ register, warning that failure to do so would render them vulnerable to inconveniences on polling day. He also pointed out that nominations for candidates at local government levels (from Local council 1-5) would take place from October 19th-23rd 2015, while those for Parliamentary candidates both constituency and women MPs would commence on November 9th-10th 2015.

He furthermore warned people against missing nomination dates and explained that if some of the potential candidates missed the date and only one of them would get nominated, he or she would automatically be announced the winner unopposed. He advised the women not to be content with only the Village Local Government level, noting that it was their right to proceed to contest on other Local Council levels. He explained to the participants the different amounts of seconders and supporters they would need to present at the different local government levels in order to be allowed to run for elections.

Asked about qualifications that were required for the women to stand, Mr. Euspan told participants that at Sub county and lower levels, members were only expected to know how to read and write, while those aspiring to be members of Parliament were required to have a minimum qualification of Advanced Level education, or its equivalent. He further noted that aspirants would be expected to present their national identity cards which would act as their voters’ cards, which he said they would start issuing at the beginning of August.

Asked by a participant whether NRM cards could as well work as voters’ cards, Mr. Euspan was quick to note that polling officials have faced similar challenges with voters confusing NRM party cards with National voters’ cards, noting that only the latter was accepted to be presented at the nomination, and voting day. He said that the NRM party cards were strictly relevant only for NRM internal party activities and were not recognized by the Electoral Commission.

Next to the floor was Ms. Robinah Ndikuweera, a trainer and gender specialist, who took the participants through the segment on media and communication, and how to utilize the media to get their campaign message through. She started by highlighting the advantages of using the media in campaigns, noting that it affords a candidate a wider audience with which he or she can reach with his or her message, improves his or her public speaking skills, while feedback from listeners or readers could help a candidate improve his or her message as the campaign progressed. She also noted that the media could be used for resource mobilization for candidates, and improves one’s name recognition, that brings with it chances of being appointed to other offices, in case one doesn’t make it in the political contest.

She also told participants that for purposes of efficiency and effectiveness, candidates should always target the most used media platform (in this case radio) and ask to appear on days and time when one is sure to have a large listenership, or even appear on the most listened to programmes. That way, she noted, candidates would address larger audiences at ago.

She further warned participants to be mindful of what they say and how they appear on the media, because voters would use that to decide whether to vote for or against them. She noted that it was important that before they appear on media, candidates have their manifesto at their fingertips, focus on their message and not attack their opponents, while avoiding making promises that they may not fulfill, because it could be used against them in future. She also advised that it was important that candidates keep their emotions in check while appearing on media, come off as accommodative as possible even under provocation, because that is when voters get to judge the candidate’s personality and temperament. Overall, she noted, candidates should demonstrate to their readers or audience that they are capable, knowledgeable, exposed nationally & internationally, by giving testimonies or examples from within and outside the country, where necessary.

In the afternoon, Ms. Ndikuweera took the participants through trainings in public speaking, which she segmented into three types, that is, one-on-one interaction, speaking at public functions or rallies, and speaking on media in particular, on radio, which is the mostly used media platform in Pallisa. She later divided the participants into three groups of 13 people each, and each group would practice one form of public speaking or communication, and act it out when all of them reconvened, with the audience asking the candidates questions to test their responses as to whether they had learnt lessons from the after-break’s session.

The final day commenced with a session that dealt with the Legal and Human Rights basis for women’s involvement in politics and the importance of women in political leadership. The session was facilitated by Ms. Carol Idembe, a Gender and Advocacy Specialist. Ms. Idembe commenced her presentation by telling the women participants that it was important for them to know that they have both legal and Human Rights Justification to run for political office. She went ahead to delve into the legal justification for women involvement and participation in political processes, both locally and globally, as guaranteed by a plethora of international policy instruments, to which Uganda is a signatory .

She noted that articles 21(1),32 (1) and 33(4) of the Ugandan Constitution all emphasized the equality of all women and men before the law, and their right to participate in political processes, and empowered institutions like parliament to intervene to address any cases of inequality if necessary, through taking affirmative action for the marginalized groups. In fact, she noted that such affirmative action is evident in articles 78(1) and 180(2)(b), which provide that each district in Uganda shall send a woman representative to parliament and that one third of every local government council must be women respectively, all intended to encourage women participation in politics.

On the International front, Idembe noted, Uganda is a signatory to the Convention on Elimination of all forms of Discrimination against Women (CEDAW), in which Article 7 guarantees equality of political participation of men and women in political and public life, and the African Charter on Human and People’s rights, which in Article 9, calls upon state parties to undertake deliberate national legislation to promote women participation in the political life of their countries.

With the legal justification given, Idembe, in a bid to engage participants, then asked what hurdles were stopping women from engaging in political affairs, even in the face of the prevailing legal justification for them to do so. As participants spoke one after the other, they noted that they continued to face challenges like insufficient education and resources to qualify and facilitate their contests for political offices respectively, women’s duo roles that restricted them to giving much attention to manning and look after homes and families before anything else, and most importantly, a patriarchal society that despises and bullies women that attempt to participate in politics. In response to the issues raised, Idembe, while acknowledging the challenges, warned the women present not to give up in their quest to vie for political offices, noting that it’s only when more women are in positions of authority and influence that such issues could be addressed. She also encouraged the women to form self-help groups among themselves, in which they could share and overcome some of these challenges. She further encouraged those who can to enroll for adult education to improve their academic ratings and also start small and medium enterprises that do not require a lot of capital to start, yet can guarantee them extra money to facilitate their political activities.

The Workshop concluded with a session on how to develop a campaign strategy which was facilitated by Ms.Robinah Ndikuweera who told participants that it was important that they first identify key and critical issues within their communities, around which their message would dwell. However, a candidate alone may not effectively run a campaign, hence it was necessary that they set up a campaign team to which roles would be assigned. She also told participants that it was important to identify your allies who can support your campaign both morally and financially, just like it was important to identify one’s opponents, know their weaknesses and relate to them appropriately.