DREAM OR FALLACY - BRIDGING THE GAP BETWEEN YOUTH AND PARLIAMENT

In order to rebuild the connections of Youth MPs and the youth in Uganda’s communities and to improve the representation of youth in parliament, the Interparty Youth Platform initiated a public dialogue in collaboration with Konrad-Adenauer-Stiftung and the International Republican Institute.
March 31, 2017 Ordering Information 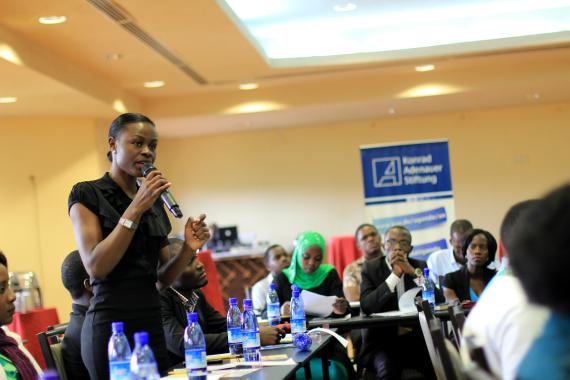 Youth participation in Uganda’s socio-economic and political processes has been increasing, although the voices of young people have still not been effectual in voicing youth priorities and influencing youth focused government policies. Public policies have failed to adequately respond to the numerous challenges faced by young people in Uganda today, resulting in widespread unemployment and poverty. Youth representation in parliament has remained ineffective and less meaningful, even though there are five Youth MPs to fulfill this role. There is a growing gap between youth representatives in parliament and their constituents.

The Interparty Youth Platform (IYOP) in collaboration with Konrad-Adenauer-Stiftung (KAS) and International Republican Institute (IRI) initiated a public dialogue in order to bridge these gaps. The dialogue was attended by members of the Ugandan Parliament, representatives of civil society and approximately 100 youth leaders of the eight member-parties that constitute IYOP. An even larger audience was following the discussion with #YouthInPoliticsUG on Twitter, leading the hashtag to trend throughout the evening.

After some introductory points of the country-representative of IRI International, Lara Petricevic and IYOP Chairperson Brenda Atim, Justice James Ogoola opened the dialogue with an impressive key-note speech. His main motive was to motivate the youth of Uganda to become active participants in designing a brighter future for their country. He asked them to build a better system with stronger parties, built on rocks rather than on pillows. Therefore, he argued for a national discourse to rebuild values and search for answers for upcoming challenges.

The following panel discussion was moderated by Charles Mwanguhya. The panelists were Hon. Mwine Mpaka, Youth MP of Western Region and Chairperson of Uganda Parliamentary Forum on Youth Affairs (UPFYA); Brenda Atim Kinyera, Chairperson of IYOP, Felix Kayihura Vice Chairperson- National Youth Council (NYC), and Elone Ainebyoona, Coordinator at UPFYA. As MP Mwine Mpaka told the audience about the work of the Youth MPs in parliament and that they were achieving more than ever, the other panelists reacted to this statement. Some major disagreements with the way the MPs are representing their target group in parliament became visible. The question was whether the MPs lack contact with the youth leaders in the communities and if they honor their duty to responsibly fulfill their mandate. Brenda Atim quipped at the Youth MP on the issue of the current breed of youth Mps doing more for the youth. She wondered why the the MPs would not actively reach out to the youth after elections. She noted that most of these leaders are reluctant to account to their electorate because they in most cases serve only one term and thus wouldn’t need the youth vote in the subsequent election. This she argued should be amended to compel the youth leaders to effectively be in touch with their electorate.

While members of UPFYA claimed to represent the whole country as soon as they are elected, the audience requested for more communication between youth members of parliament and youth in the communities. The members of different parties reminded the MPs that they should work out a way to find solutions for the bad economic situation of many young people in Uganda and should invest more in the development of leadership in youth leagues. Many participants wanted to express their questions and wishes in the dialogue and most of them were heard by the panelists. Answers to the large amount of questions had to be cut short due to time constraints, but MP Mwine Mpaka once again explained that that the representation and the work of the youth MPs in parliament is aimed to support the issues of young Ugandans. He went on to suggest that in order to increase effective representation of the youth by their MPs, political party affiliation should not be emphasized. He suggested that youth representatives should not belong to any political party so as to exercise independence and effectively push the youth agenda without being hampered by party positions.

In his closing statement, Justice Ogoola again invited the youth to “be bold and courageous” on all issues of social and national interest. The youth should let their leadership be one of ideas rather than personalities and hurry up to accomplish their generations call for a better future.

In conclusion, the Country Representative of Konrad-Adenauer-Stiftung Mathias Kamp thanked the panelists and audience for the dialogue and the fair discussion. Asking some open questions such as whom the parties and CSOs have in mind when they design programs for the youth? He further challenged the audience to stop for a moment and ask themselves why political parties are unattractive to the youth, and how we can remedy this. He called for further discussions about the subject beyond the conference room for example by actively engaging on the hashtag