On 04th October, a roundtable discussion on constructive youth political engagement was held by the Konrad-Adenauer Stiftung (KAS) Uganda and the University Forum on Governance (UNIFOG). Under the theme “Beyond elections: fostering and sustaining constructive youth political engagement” the roundtable brought together distinguished youth from the academia, political parties, civil society and government. UNIFOG and KAS representatives, including special guest Miriam Fischer, Desk Officer of KAS Headquarters in Berlin too were present to discuss prospects for youth mobilization in Uganda.
October 14, 2016 Ordering Information 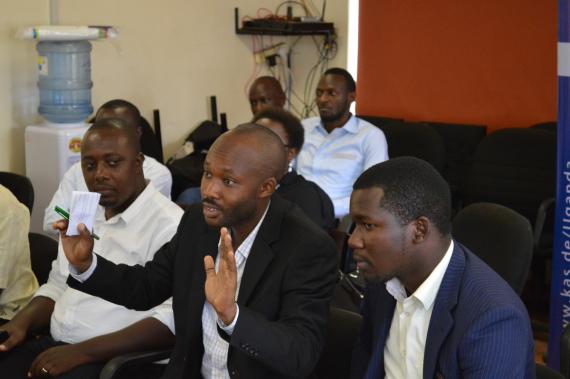 Despite some promising framework conditions for youth engagement, lives of young people in Uganda are in practice still characterized by inadequate representation in positions of political leadership and a lack of political engagement. However, considering that more than 70% of Uganda’s population is below 25 years of age, participation of youth (both female and male) in democracy and governance processes is crucial for sustainable national development.

In recognition of the vital role that the youth play in shaping the future of the nation, particularly in promoting good governance and democracy, Konrad-Adenauer Stiftung (KAS) Uganda and the University Forum on Governance (UNIFOG) held a roundtable discussion on constructive youth political engagement at the Makerere University Institute of Social Research on 04th October in order to discuss prospects for youth engagement in political processes in Uganda. The event was intended to bring together academics and experts to enable them to share their varying perspectives on the challenges of mobilizing young Ugandans for meaningful political participation, but also to arrive at practical proposals for actions to improve on youth inclusion in Ugandan policy-making processes.

Michael Mugisha, Technical Advisor atUNIFOG and Fellow at the London School of Economics, presented a paper on the current state youth political participation in Uganda. In his paper, Mr. Mugisha explains that Francis Fukuyama’s theories on the relationship between politics and economics give meaningful insights to understand the lack of political participation of the Ugandan youth. According to Mr. Mugisha, the clientelistic political system leads to manipulation and mismanagement of economic processes as well as to an “underinvesting state”, fueling unemployment among the Ugandan youth and in turn discouraging them to participate in political processes. Economic development in Uganda had produced new social groups full of potential, which however lack the incentives for political or civic engagement, due to the repressive and nepotistic political structures. During his presentation, Mr. Mugisha emphasized the centrality of political parties as tools for political mobilization, but noted that political parties in Uganda are highly unpopular among the youth.

Moderated by Yusuf Kiranda, Fellow at the Centre for Development Alternatives, Mr. Mugisha’s presentation was followed by the roundtable debate. Mathias Kamp, Country Representative of KAS Uganda, narrowed down the issue of youth political participation to two major questions: 1. How many young people in Uganda actually have a say compared to the number of youth in the country? 2. In how far is the output of policy making reflecting the interests of the youth? According to Mr. Kamp, there is a clear disconnect between youth and the political sphere as long as the policy output does not clearly reflect the youth’s interests, even though there is a majority of youth in the country.

The roundtable discussion was generally marked by lively debate and diverging points of views. The experts and academics concentrated their conversation on a number of key questions that were debated intensively. Some participants raised questions about the meaning of youth political participation , pointing out that the Ugandan youth are actually very much involved in shaping Uganda’s political future, for example through the National Youth Council and the active participation during elctions. Subsequently, a lively debate emerged on the question of the National Youth Council effectively representing the Ugandan youth or if it is just a reflection of NRM party politics.

Another key issue that quickly emerged as one of the focal points of debate was the question if there are deficits regarding culture and attitude amongst the youth concerning democratic principles. According to a number of roundtable participants, many young people don’t even feel the responsibility to hold their political representatives accountable, because civic education on basic concepts of democracy and responsible citizenship is widely lacking in Uganda.

Moreover, the connection between Uganda’s economic development and the political participation of youth was taken up again by the participants, who agreed that the desperate economic situation in which many young people in Uganda find themselves preoccupies them and prevents them from meaningful engagement to contribute to society or politics.

Through expert inputs and plenary discussions, the roundtable discussion provided an avenue to explore different dimensions of the challenges of youth political participation and facilitated a constructive exchange on feasible ways of mobilizing the youth in Uganda. 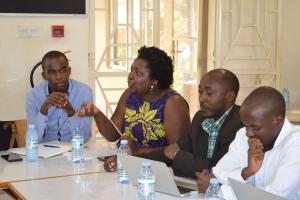 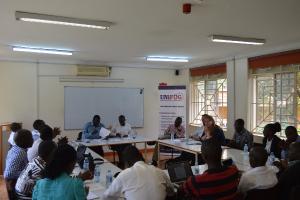 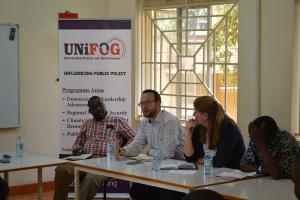