Uganda is burdened with a trade deficit – and it is growing. This deficit in exports is harmful to Uganda’s development, employment situation and society. How can Uganda nevertheless turn itself into a big exporter in the global economy? And which role does the private sector play in this regard? To discuss these questions, the Konrad-Adenauer-Stiftung (KAS) Uganda, in cooperation with the African Center for Trade and Development (ACTADE), organized the Private Sector Forum 19th October in Imperial Royale Hotel for the second time this year.
October 21, 2016 Ordering Information 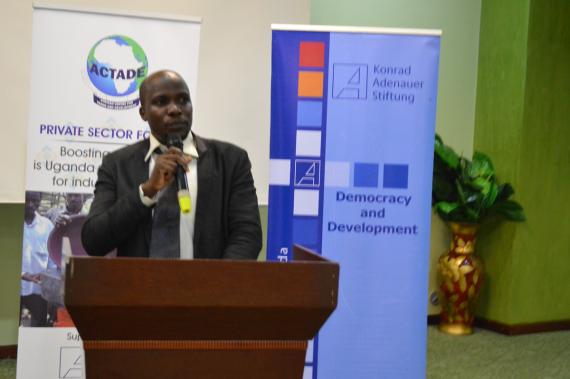 Uganda’s trade deficit is alarming – with imports significantly exceeding exports and recent trends not indicating any improvements. Indeed, export volumes have risen during the last couple of years in Uganda, but so have the volumes of imports. How can Uganda, supported by its private sector, reverse this worrying trend? To arrive at feasible answers to this question, the second Private Sector Forum on this year was held by KAS Uganda and ACTADE on 19th October in Imperial Royal Hotel. The event brought together approximately 100 participants drawn from the private sector, including industrialists and Small and Medium Entrepreneurs, as well as major umbrella bodies like the Uganda Private Sector Forum, Uganda Employers’ Federation or Uganda Manufacturers Association, but also representatives from media houses, non-Governmental Organizations and government to discuss Uganda’s prospects for boosting its exports.

How troubling the current state of Uganda’s macro-economy really is was analyzed by the economist, Dr. Fred Muhumuza, in a stirring presentation on current facts and figures concerning Uganda’s trade balance. According to Bank of Uganda, Uganda’s external trade position is fragile, largely due to higher import growth, as export earnings remain sluggish. The trade deficit remained persistent at USD 437 Million, equivalent to 7.7 per cent of GDP in 2015/16.

However, as heavily emphasized by Dr. Muhumuza, trade is a major driver of growth, associated with increased employment opportunities and higher incomes. Therefore, exports need to be increased as means of creating jobs, stabilizing the exchange rate for better business planning and boosting the overall development of the country. So what is needed to reverse the trade deficit in Uganda? Is the current deficit a governance challenge? How can the struggling private sector be supported to be more competitive in the region and globally?

During his presentation, Dr. Muhumuza gave two major recommendations in order to answer these questions, building on the observation that Uganda is well linked to the global economy, as can be deduced from similar trends of macro-economic indicators: 1. as a means to evade global regression, Uganda needs to identify its trade niche and 2. Uganda needs to narrow its trade focus on its most dominant trading partners in order to boost exports. These trading partners, according to Dr. Muhumuza, can be found in three major regions: COMESA (Common Market for Eastern and Southern Africa), the EU (European Union) and the Middle East (mainly represented in this case by the United Arab Emirates).

The following panel discussion brought together Mr. Lwere John Bosco, from the Exports Promotion Board, Dr. Kajura Charles, Hoima District Production and Marketing Officer, Ms. Victoria Sekitoleko, Senior Agricultural Consultant and Former Agriculture Minister (TBC), Arinda Daphine, Member of the Young Leaders Think Tank for Policy Alternatives; Mr. Anil Damani, of Dembe Group. As this group of panelists combined the perspectives of numerous different sectors, the insights and ideas that were presented in order to boost Uganda’s exports were diverse and stimulating. Even though the complexity of the problem naturally resulted in a complex combination of proposals, some key recommendations could be identified from the panelists discourse with each other and the audience:

In every proposal, the participants made sure to emphasize the importance to integrate all the small- scale farmers in Uganda when thinking about ways to boost exports. ‘Every single farmer is a business-man’, said a representative of Uganda Manufacturers Association, - ‘and they need to be taken into account’. Small- and medium sized enterprises, especially in the agricultural sector, are the backbone of Uganda’s economy; therefore they should be where to set off from to increase exports.

In this regard, the panelists agreed that the lack of processing facilities portrays one of the central problems. In the communities, according to them, the potential of agricultural commodities is not fully maxed out, as significant parts of the crop go to waste due to insufficient equipment. Interestingly, this challenge was brought up in the context of Uganda’s linkage to the global economy: as two indices determine a country’s export revenues - the price set by the world-market and the volume of exports - Uganda’s primary strategy should be to boost the volumes of production for export products in order to affect its troubling trade balance.

Another issue raised by the participants was the issue of corruption in government ministries. The panelists, especially Ms. Sekitoleko, spoke very openly about how significant amounts of money are being wasted by government agencies instead of being invested in, for example, more sophisticated equipment for small-scale farmers in local communities, drawing back to the topic mentioned earlier. Moreover, as raised by one of the auditors, government generally lacks the skills and know-how of how to encourage business-growth and production. Therefore, the promising potential of public-private partnerships (PPPs) was emphasized several times during the debate.

However, the most dominant topic of the day, and clearly the recommendation stressed most forcefully, was the need to narrow down Uganda’s focus on a specific niche and a specific export area. Uganda’s major export products are fish and fish products, tobacco and tea, flowers, cotton and maize. Uganda should concentrate on these products, identify them as its niche, and increase productivity and export volumes. Why reinventing the wheel when Uganda could instead gain from existing ties and networks? Therefore, the panelists recommended to refocus export and economic activity to the biggest trading partner worldwide: COMESA , with special regard to Kenya. Existing trading relationships with COMESA indicate that basic physical infrastructure is already in place. According to Dr. Muhumuza, the closest neighbors of Uganda should be treated with utmost priority when it comes to export promotion.

In this regard, the East African Community (EAC) plays a significant and influential role. Even though the partnership bears a huge potential for Uganda’s economic growth, numerous tariff- as well as non-tariff-barriers continue to hold Uganda back. The EAC – the panelists agreed on that – is the way forward, but Uganda needs to address those challenges that limit free trade within.

Wrapping up the event, the moderator, Doreen Komuhangi, as well as the organizers, Susan Nanduddu representing ACTADE and Donnas Ojok, representing KAS, encouraged the panelists and participants to not only carry the insights gained from this debate on to their networks, but also to implement the recommendations arrived at in their own sectors. As stated by Anil Damani ‘this forum might be the first step to the solution. We might find ourselves looking back and think: this was when Uganda set off to become a huge exporter’. 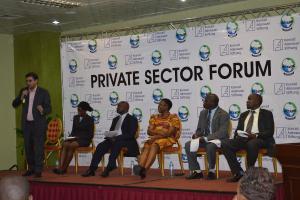