This year the National Youth Conference dealt with the topic of gender equality and how the youth can change the gender equality legislative landscape in Uganda. On two days, representatives of the youth discussed issues related to the equality of rights, opportunities and challenges for youth and tools to influence politics.
November 27, 2018 Ordering Information 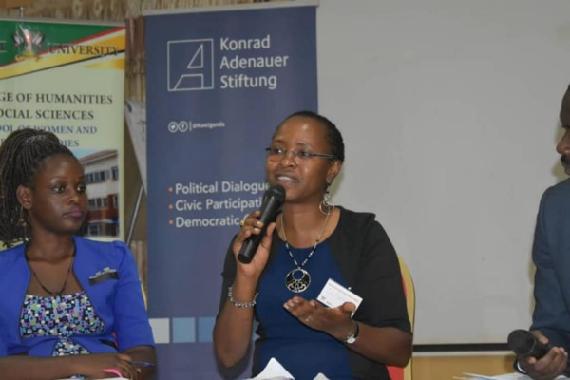 Professor Sarah Ssali about challenges for the youth 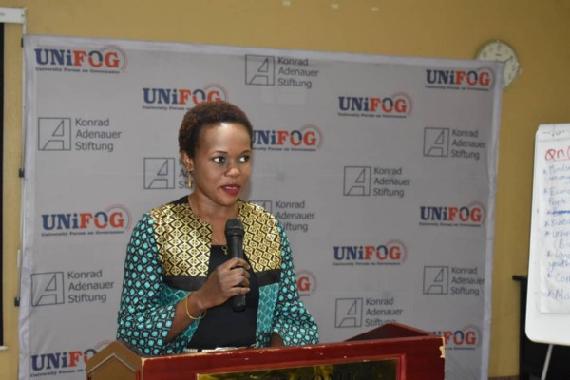 The 5th edition of the annual National Youth Conference took place under the slogan “Championing Youth Participation in shaping a Holistic Gender Equality Agenda” on 23rd-24th November 2018. The current laws and policies are less inclusive despite the inequality among different social groups as youth, women, people with disabilities and others. The aim of the conference was to introduce a holistic view of gender equality that captures inequality of rights, opportunities and voice between and among different social groups. The focus was on the youth as a social group who can change the gender equality legislative landscape.

During the panel discussion on opportunities and challenges towards realizing equality of rights and opportunities for youth, it was mentioned that there are policies to support gender equality but they are not implemented. Sarah Ssali, Professor at Makerere University, talked about the social contract between citizens and the state and that therefore the state has a responsibility to its citizens. Another key remark was that the youth is not well represented in politics as no young people are sitting in the cabinet and that not everyone is free to express their opinion as many radio channels belong to the government. The panel discussion was closed with the note that young people should learn from the lessons of the generations before who struggled and that they shouldn’t believe in negative stereotypes about themselves.

The group work about constraints and opportunities of getting equal chances for the youth highlighted corruption and the lack of access to information as key constraints but also the mindset of the youth to have an inferiority complex. Through corruption, the youth has only limited access to financial funds. The participants saw opportunities in the use of media to sensitize other young people and in the enhancement of the education system to develop the skills of young people. To address corruption, there need to be transparency and integrity.

On the second day, Perry Aritua — executive director of Women’s Democracy Network in Uganda — talked about gender equality and public policies. She mentioned that there is an ignorance about women’s issues as Uganda is a patriarchal society. But she also said that when new issues arrive, policies need to be renewed. So, policies are not fixed, they also need to be monitored and evaluated. Achieving gender equality is primarily the duty of the government. Media, NGOs, the private sector and others can only supplement to it.

The participants also discussed about methodologies and tools to influence policies. The key topics discussed were that young people must believe in themselves and that they can use their number and energy. Also the use of social media was actively discussed. As not everyone uses social media, not everyone can be reached by it. They also indicated the problem of disinformation in using social media. Despite this, social media can still be a strong tool for the youth to mobilize people.

Sarah Ssali closed the National Youth Conference and mentioned the opportunities the youth has today and that they should take themselves seriously. The need for information and debating issues is also very important. The conversation must be carried forward for the future generations.