To create a platform for dialogue on the current situation in South Sudan, KAS together with Makerere University Convocation and the University Forum on Governance organized a public dialogue and academic roundtable to discuss the prospects for peace and political stability in South Sudan. With the theme: “Transcending the Shadow of Violence: Alternatives for Fostering Inclusive State Building and Sustainable Peace in South Sudan” the events aimed to provide a platform where experts on violence, state building and peace will reflect on prevailing circumstances in Sudan.
August 30, 2016 Ordering Information 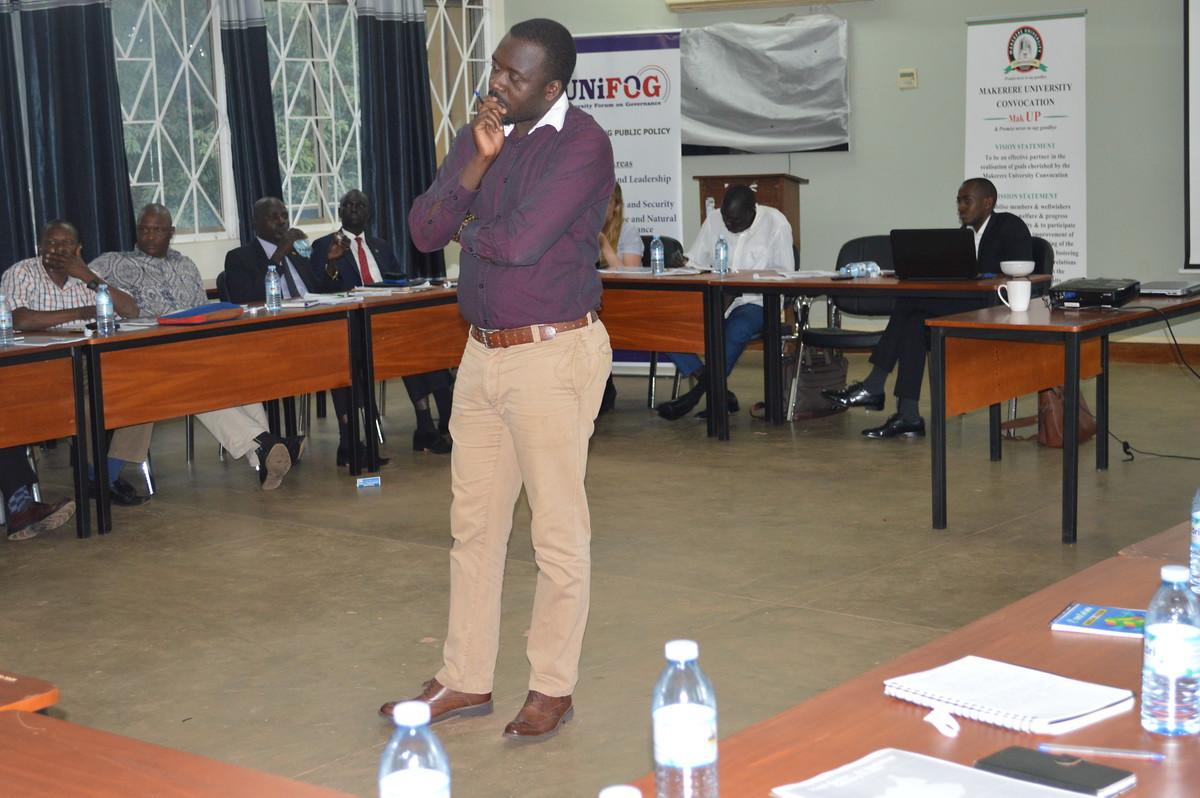 On 26th August, a full-day symposium on possibilities for peace and inclusive state-building was organized by the Konrad-Adenauer-Stiftung in partnership with UNIFOG and the Makerere University Convocation to interrogate prevailing circumstances in South Sudan and to identify alternatives for peace-building. The event was two-parted, with an exclusive expert discussion in the morning, followed by a public panel debate in the afternoon. The symposium brought together approximately 35 experts for the round table discussion and over 160 participants. 4 panelists composed of a human rights activist, 2 academics and a politician discussed prospects for peace and progress in South Sudan.

The event was intended to bring together academics and experts to enable them to share their varying perspectives on the crisis in South Sudan, but also to arrive at practical proposals for solutions and feasible actions to improve on the situation in Uganda’s northern neighbor-state. Moreover, the second part of the event was aimed to customize these academic perspectives to the broader public and to allow for an open discussion on South Sudan within the civil society. This way, the event facilitated a constructive exchange on peace- and state-building perspectives in South Sudan.

During both sessions, participants witnessed an extraordinary event that generated great interest, fueled by the hashtag #SSudanDialogue at the day of the symposium.

The morning-part of the event was introduced by a keynote address from Donnas Ojok, Programme Officer at KAS, stressing the urgency to act in behalf of the violence continuing in South Sudan. “It is clearly a situation we should address as a continent”, he stated. To initiate the conversation, Michael B. Mugisha, Fellow at the Centre for Development Alternatives and a teacher at Makerere University, held a presentation, that gave deep and detailed insights into the history of South Sudan and the series of events that shook the newest state on earth since its creation in 2011. During his talk, Mugisha emphasized on the centrality of putting an end to violence in South Sudan, because “a state in locked in violence cannot develop”. Referring to the three characteristics of statehood, he concluded that it is essential to bring all instruments of coercion under effective state control in South Sudan.

The plenary discussion was marked by lively and animated debates and diverging points of views. The experts and academics engaged concentrated their conversation on a number of key questions that were debated intensively:

1.Does the state of South Sudan exist?

2.Does the government of South Sudan have any legitimacy?

3.What was the main driving force behind the current conflict: ethnic disputes, Northern oppression and dependency, or external/imperial influences?

4.Should there be an external intervention in South Sudan – and if so – where should this intervening force be stemming from?

Among those key questions, the most intensively debated was clearly the issue of foreign intervention. While one group of participants stated that foreign intervention would only cause additional challenges to the country and that one would have to let the parties fight until one finally surrenders, the majority of scholars involved clearly declared that the humanitarian costs for this approach would simply be too high and advocated strongly for a foreign intervention in South Sudan. Concerning the issue of where such an intervention should stem from, opinions among the participants again diverged. After intensive discussion, most experts agreed that this force should be constituted by countries that have no direct interest in the country themselves; that are unlikely to take sides.

Another subject which dominated the debate was youth engagement. A majority of experts was convinced that a long-term solution to the ongoing state of conflict in South Sudan would have to involve the youth – not only are the youth the primary killers in South Sudan in the current situation, as they are being used as a war tool by the elites, but also are they the driving force of change. “We can never bring peace through Addis Ababa when there is not peace in their minds, when there is no peace on the ground”, stated one participant of the expert round. Therefore, the young people of South Sudan should be educated about their rights and should be engaged in open dialogue about the conflict.

The expert round table was closed by remarks of Prof. Julius Kizza, a political science don at Makerere University. During his speech, Kizza spoke up for a peace-building-process that involves all relevant parties, the victims as well as the culprits, as “every group that you minimize today will continue to fight the majority and harm peace in the future”. Moreover, Kizza advocated for an authentic and genuine discussion, in which the truth is told despite any political considerations or personal sentiments, because “we are here as academics”.

The second part of the event was opened by an emotional speech of the Vice Chair Person of Makerere University Council, in which she reminded the audience that the people of South Sudan are “not only our neighbors, they are our brothers and sisters”.

Open to a broad public audience from different backgrounds, the panel discussion was hereafter introduced by star-guest Prof. Mahmood Mamdani. He systematically analyzed the series of events that led South Sudan up to its current situation and argued that South Sudan “is not a failed state, it is a failed transition”. Following Prof. Mamdani’s speech, every other panelist put the focus of his or her presentation on another key issue. While Mr. Tayebwa reminded the audience that there are still those areas in South Sudan where life is simply going its normal ways, and that this is where one should start to build citizen capacity to hold their government accountable, Mr. Biel focused on the necessity to implement the peace-agreement of 2015 effectively.

Kizza brought up some points of criticism of Prof. Mamdani’s arguments. Kizza reasoned that South Sudan is not a case of failed transition, but of failed state-building, referring to the four conditions of “Staatsbildung” in the classic German sense. Finally, Dr. Ssali introduced a gender-perspective on South Sudan to the audience, acknowledging that women and other minimized groups of society are lost in the narrative of peace-building, even though they have the potential to significantly contribute to state capacity.

Despite the diverging approaches of the panelists towards conflict-solutions, one issue clearly dominated this half of the symposium as well as the following plenary discussion: is tribalism really the driving-force behind conflict in South Sudan? Prof. Mamdani gave a deep analysis in this regard. He argued that tribalism does indeed play a significant role in the current conflict, but he emphasized that this tribalism did not originate in South Sudanese society itself, but was created by the British colonialists as a tool to centralize power – “divide and conquer”.

According to Mamdani, the British have politicized ethnicity and have drawn hard boundaries between ethnic identities that have not been natural to African culture. This argument was hardly debated in to following plenary discussion; participation was active and lively, even emotional at some points. In fact, the moderator,

Mr. Kiranda, even struggled to enable everybody willing to share their views to speak due to time constrictions.

Therefore, wide interest was expressed to rerun a similar event in the near future. Through expert inputs, plenary discussions and breakaway panels, the event allowed explore different dimensions of the challenges in South Sudan and clearly contributed to a much greater interest in South Sudan within the broad public.

All in all, the public dialogue and the roundtable discussion provided a unique platform to discuss not only the challenges affecting the country but also the opportunities that exists and how they can be exploited to bring forth a more sustainable development in the world's youngest nation. The quality of the conversation was even enhanced more by the fact the over 90% of the participants were South Sudanese themselves.

Report was compiled by Leonie Staas and Donnas Ojok

SYMPOSIUM ON POSSIBILITIES FOR PEACE-BUILDING IN SOUTH SUDAN 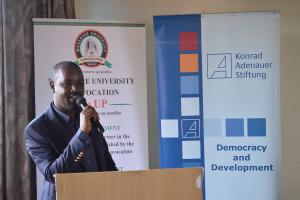 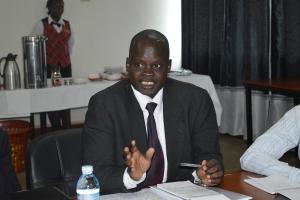 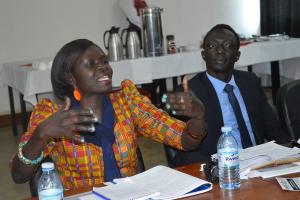 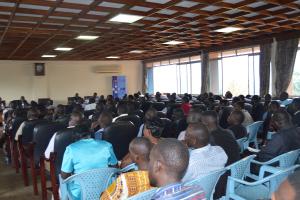 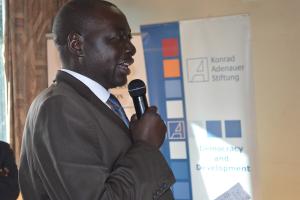