The Young Leaders Think Tank for Policy Alternatives is an initiative of KAS to enhance youth participation in governance and policy formulation in Uganda. The 25 members are young, highly qualified Ugandans engaged in different sectors and meet regularly to discuss important policy issues and develop policy papers (the last one on Agriculture was even presented to the Vice-Minister of Uganda). Therefore, developing skills to write well-structured and relevant policy briefs and blog posts was the goal of the two-day-workshop from 3rd to 4th September at Esella Country Hotel in Kampala.
September 8, 2016 Ordering Information 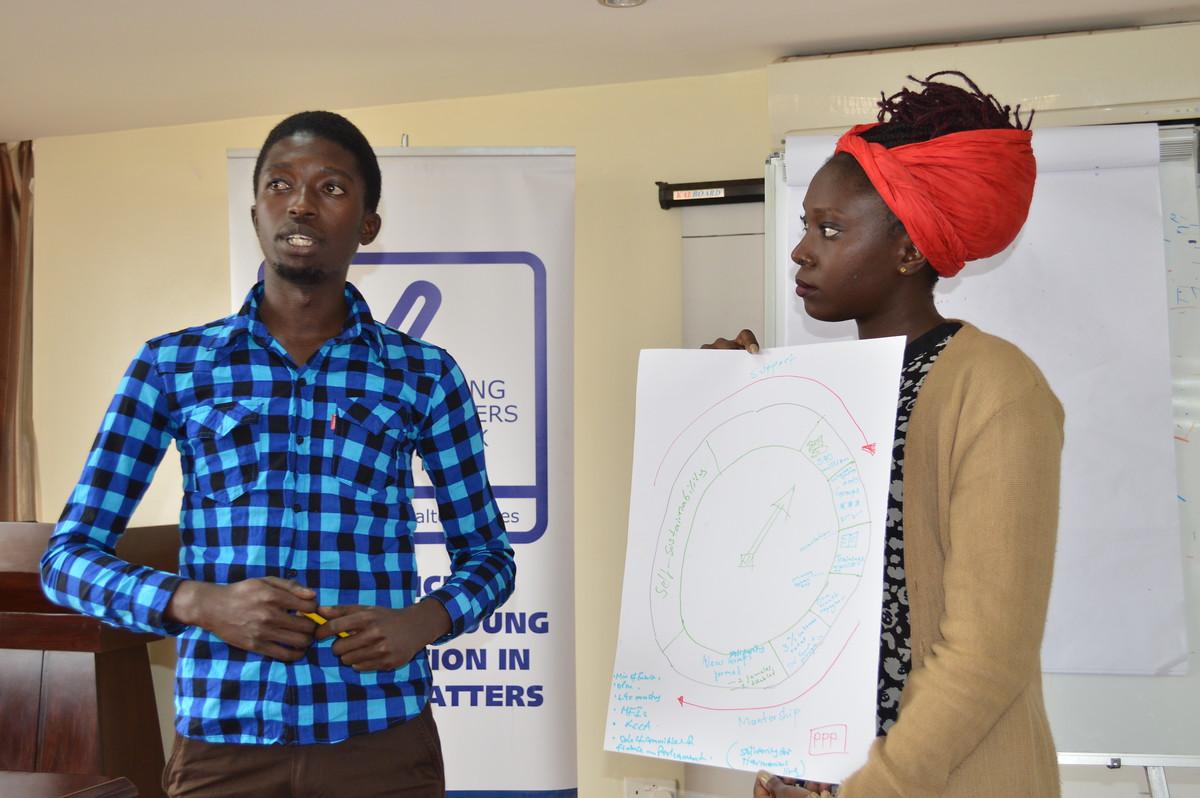 The workshop aimed to increase members’ awareness of the different strategies in policy work and how policy is generated by different types of stakeholders.

Anna Hoffmann, KAS Event Coordinator, welcomed the 19 participants to the workshop on Saturday morning and moderated a short introduction round, where old and new members as well as the attending KAS staff introduced themselves and answered the question: “If you could change one thing of Uganda, what would it be?” While some members were very creative in their answers, wishing for less traffic jam in Kampala, others raised serious political issues, including the attitude of young Ugandans towards leadership, the prevailing pessimism in the country, the school curriculum and the perception of the Ugandan national identity. Thereafter, a quick “Take a Stand”-Exercise, training the participants to take clear political opinions – from democracy as the ideal form of governance to the issue of legal prostitution – revealed the many different worldviews within the Think Tank and laid the foundations for further discussions during the weekend.

A short presentation by Anna Hoffmann on how to write and structure a policy brief provided the members with the basic skills for the next exercise. In small groups of three or four people, each accompanied by a KAS staff member, the members developed a policy brief on a topic of their interest – that included defining the topic, doing research, accumulating data and statistics and editing the paper to an appealing format. The group exercise was intended to not only build capacity of members to write concise and engaging policy briefs, but also take the opportunity to work on multiple topics from the working groups and beyond to develop briefs to create content for the Think Tank website and be a medium for continuous recording and archiving of Think Tank debates and discussions. Heads were spinning while doing extensive research and vivid discussions dominated the atmosphere in the conference room.

The afternoon-session was dominated by two key professionals from the field of policy work to present to and engage with the think tank on their wide field of experience. Henry Kasacca presented on the reality of policy-making within the opposition parties in Uganda, while Hippo Twebaze described how policy-making is conducted within the ruling party of Uganda, the NRM. Both experts agreed on key problematics within the context of political parties in Uganda: processes within these parties lack institutionalization as well as a clear ideological orientation, informality is ruling out formal procedures, and a disconnection between party-head – and bottom discourages young professionals to engage in party politics.

Following the expert presentations, a lively debate occurred. Among the topics most intensively discussed were the issues of policy formulation and party size. While some think-tank members doubted that an extensive party-size is a problem for policy-making, Mr. Twebaze explained that within the NRM, the big size leads to a lack of cooperation and information flows between local and regional party-offices and the center, even though the party-branches should theoretically be the driving-force behind policy ideas. Both presenters agreed that in Uganda, the process of policy formulation has taken the wrong direction: while civil society should ideally feed policy-making through the channel of political parties, the reality shows a top-down procedure in which individual decisions get translated into party-politics.

The second day of the workshop was introduced by a reflection round on learned lessons from the previous day – most importantly the need to consider informal policy-making processes as possible starting-points to influence decision-making. Hereafter, the working groups presented the results of their previous work on policy recommendations. The presentations were embedded in an exercise on target group analysis: each group had to define their target audience – being for example the Ministry of Finance or the Office of the Prime Minister – and adapt their presentation accordingly. Focus was put on conciseness and a clear call to action, tailored to the specific target audience. Each presentation surprised with interesting recommendations: from micro-financing schemes for refugees and host-communities in order to create self-sustainability of refugees to the taxing of unutilized public land in order to increase national productivity.

The exercise was a field of practice and capacity building of members with regards to skills of defining, formulating and presenting a policy topic of recommendation in the most concise and effective manner according to the given context.

All in all, the workshop was a great success and members gave positive feedback on the program. We can be curious about the newly trained members’ blog posts that will be uploaded to the Think Tank’s website soon: www.youth4policy.org 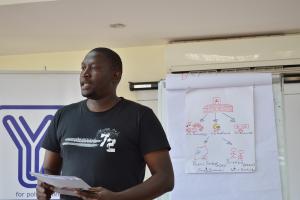 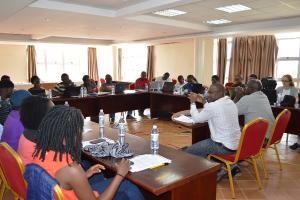 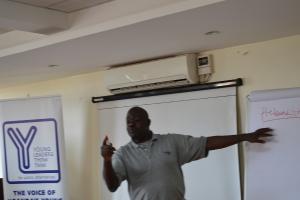 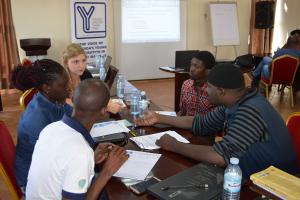