by Peter Rashish
As Joe Biden takes office as the 46th President of the United States the country is at a turning point in its trade policy, one where rules are likely to move to the forefront. A key question is whether in response to the weakening of the nearly 75-year old multilateral trading system the United States will lead a concerted effort with like-minded economies to create high-standard rules that will help prevent the deconstruction of the trading system into competing blocs of laws, standards, and norms.
January 15, 2021 Ordering Information

Since the end of the Cold War, U.S. trade policy has been characterized by periods of considerable activism whose record includes enacting NAFTA and establishing the World Trade Organization under Presidents George H.W. Bush and Bill Clinton, securing multiple bilateral trade agreements under George W. Bush, and the simultaneous pursuit of mega-regional agreements focused on Asia and Europe under Barack Obama. But during this period trade policy also became increasingly contentious in Congress, with concerns about its impact on workers and the environment at home and abroad. Yet over the last decade trade has also become more popular among Americans as a way to improve economic growth, especially among Democratic voters.

The Trump administration’s nationalist, go-it-alone trade policies – which departed radically from previous practice – did not only weaken the rules-based trading system. They were also ineffective in convincing China to change its economic behavior and at the same time alienated traditional allies. Yet the Trump administration’s approach to trade policy is more likely a symptom of increasingly anarchic conditions in the global economy than a harbinger of a new era of U.S. protectionism.

Several of these challenges can be the springboard for the new administration to reposition trade relations with like-minded countries after the Trump administration’s neglect or undermining of them. And many provide the Biden administration with avenues for economic diplomacy with allies to forge new trade rules and to reform the multilateral trading system. 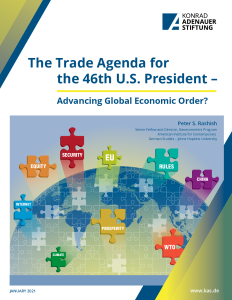