Central Asian states and their Path to Development and Prosperity

European leaders and members of the transatlantic business community met with experts and officials from Central Asia to discuss the development and future prosperity of the region in a successful summit in Chicago from September 15-16, 2016. After decades of transition after the collapse of the Soviet Union, Central Asia has emerged once again as an essential crossroads of strategic importance for Europe, Russia, and South and East Asia.
September 21, 2016 Ordering Information 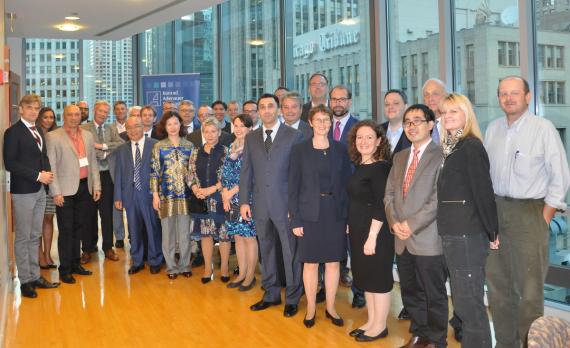 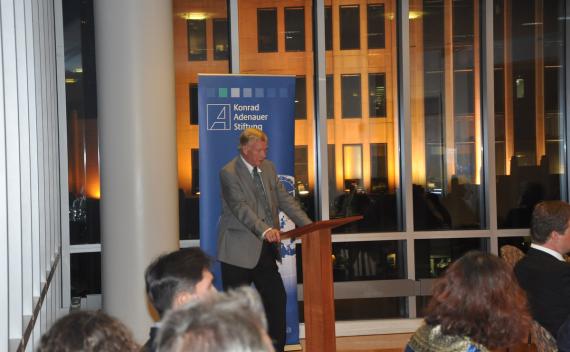 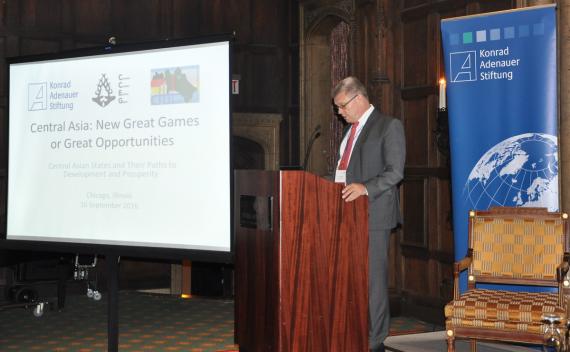 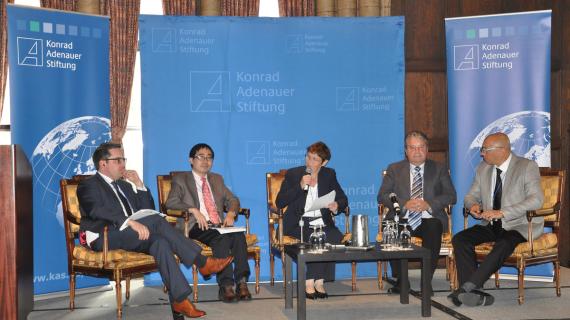 Thomas Helm, Director of the KAS Office in Kazakhstan, asks panelists a question.

Though bordering Afghanistan, Pakistan, and other potential sources of destabilization, Central Asia has much potential as a partner for US and European trade and investment. The conference offered a unique opportunity to share and hear a diverse array of perspectives, providing a space to further the understanding of the stakes and potential for positive influence of both local and international actors.

The conference was structured around four roundtable panels on different aspects of the complex connections between the internal development of Central Asia’s five countries—Kazakhstan, Kyrgyzstan, Uzbekistan, Tajikistan, and Turkmenistan—and regional relationships with global powers. Deputy Chief of Mission of the Embassy of Kazakhstan, Yerkin Akhinzhanov, also gave a keynote address.

Several themes emerged throughout the course of the day’s discussion. Though the paradigm of a ‘Great Game’ of competing geopolitical interests inspired the framing of the conference, a number of experts commented on the modern complexity of Central Asian foreign affairs. No longer a battleground between Russia and Euro-America, other prominent actors have come to play a major role, including China, Turkey, India, and Iran. While the EU has replaced Russia as a top trading partner, Chinese investment has also dramatically changed the economies of the region. Similarly, as sanctions against Iran end after the nuclear deal, Iranian natural resources such as oil and natural gas will greatly influence existing trade patterns. Most importantly, the five Central Asian nations themselves seek to be taken seriously as independent states and leading players after a long history of colonialism and foreign control.

Countering the threat of violent extremism

A large portion of the day was spent discussing the nature and extent of the region’s potential destabilization at the hands of extremist movements. The topics of trade, economic development, and regional integration all revolved around the first and most pressing need of neutralizing security threats before they cause risks with wide-reaching, global effects. Presenters spoke of the vulnerability of Central Asian youth populations and the need to address root causes such as social immobility and a lack of political inclusivity in order to prevent another ‘lost generation’ of at-risk youth. Both European and Central Asian experts called for increased government capacity to understand and use social media as a positive tool to strengthen confidence in domestic institutions and counter extremist propaganda. A consensus emerged that security should not be not defined only in terms of military action and border control, but is also dependent upon socio-political factors such as economic development and the access to and quality of education.

From Post-Soviet to regional and local independence

A number of experts from both the US and Central Asia remarked upon the need to abandon thinking of the region as one that is still transitioning away from its Soviet past, despite the persistence of authoritarianism. Though all recognized the need for more democratic systems of governance in each of the five countries, it was emphasized that this process would need to move slowly to ensure its lasting stability and security, and that it should proceed organically in a manner appropriate to each country’s specific circumstances.

Both panelists and audience members agreed, however, that more regional integration was desperately needed to address current economic challenges and demographic realities. The lack of trust and cooperation between the five Central Asian states remains a major obstacle to social, political, and economic development. Especially concerning energy and water, the distribution of natural resources throughout Central Asia necessitates a cohesive approach to policy in order to decrease energy dependence. As a major crossroads of trade between Europe and Asia, a more harmonized trade and tariff policy would increase prosperity in the region as a whole, especially as individual governments negotiate the pros and cons of China’s One Belt, One Road initiative. Finally, the security threat posed by global population migration could be met more effectively with an integrated visa regime that takes account of both regional and international migration.

The US, Germany, and the EU at large play a key role in fostering a productive environment for the initiation of these reforms in Central Asia. C5+1, a new, US-sponsored program for development in the region, has been launched to engage the governments of all five Central Asian countries in multilateral policy negotiations and provide a platform for synthesizing and streamlining agendas. Modeled on the EU’s Strategy for Central Asia and its emphasis on the engagement of all relevant actors, C5+1 provides a promising path of positive engagement in the region for both the US and the EU.

Given the global concern with security and the threat of violent extremism, expertise from Europe the United States could benefit Central Asia as its governments try and address the problems now understood as linked to this issue: healthcare, education, and energy dependency. As Central Asian governments begin to restructure their economies away from an overreliance on nonrenewable resources, investment in new, environmentally friendly technology is necessary, like the possibilities currently being explored in Germany regarding clean coal. Finally, investment in the hard connectivity of the region—the physical integration of transportation routes and infrastructure development—is essential in helping Central Asia realize its potential as a hub of trade, to the benefit of all parties, both East and West.