The Military in Germany and the U.S. - Two Perspectives

On February 17 and 18, more than 400 participants attended the Fifth Annual German Conference at Harvard to discuss this year’s theme, “The German Angst of Leadership.” The Konrad Adenauer Stiftung hosted a panel discussion on security policy, featuring remarks by both a German soldier and a U.S. soldier who discussed their experiences in Afghanistan.
February 17, 2012 Ordering Information 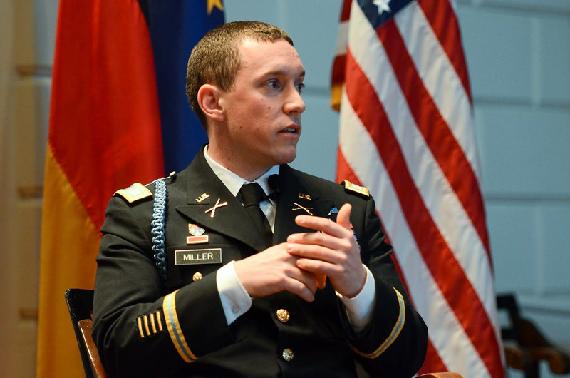 Captain Markus Posse of the German Bundeswehr speaks to the audience at the Fifth Annual German Conference at Harvard. 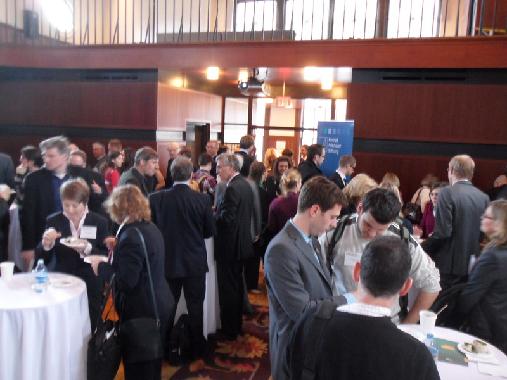 Captain Aaron Miller of the U.S. Army discusses his experience in Afghanistan. 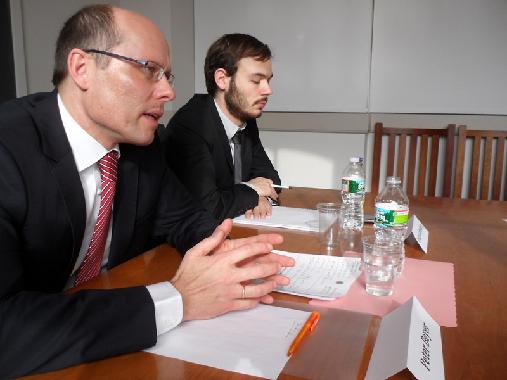 Conference attendees network during a break between panels at the Fifth Annual German Conference at Harvard. 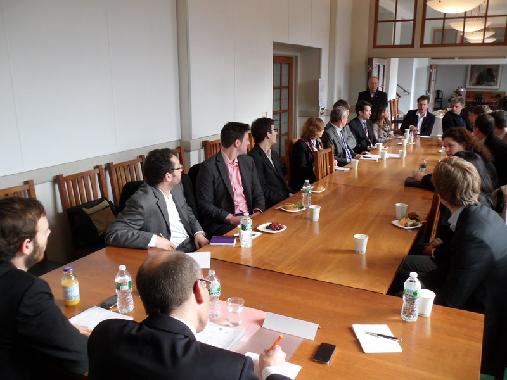 Peter Beyer MdB takes questions from attendees at a breakfast discussion to kick off the conference.

On February 17 and 18, more than 400 participants attended the Fifth Annual German Conference at Harvard to discuss this year’s theme, “The German Angst of Leadership.” The Konrad Adenauer Stiftung hosted a panel discussion on security policy, featuring remarks by both a German soldier and a U.S. soldier who discussed their experiences in Afghanistan. Captain Markus Posse of the German Bundeswehr and Captain Aaron Miller of the U.S. Army shared their views and answered questions from the audience in a discussion moderated by Constanze Stelzenmueller, Senior Transatlantic Fellow for the German Marshall Fund’s Berlin office.

While the soldiers shared many experiences and have each made a career from their military service, their decisions for joining the military were quite different. Captain Miller said he always wanted to be a soldier from the time he was a little boy, whereas Captain Posse was required to serve in the military under Germany’s conscription policy. Both have found success in their careers, with Captain Miller on a path to teach International Relations at The United States Military Academy at West Point upon completion of his Masters in Public Policy at the Harvard Kennedy School, and Captain Posse recently taking up a new post that includes planning exercises on the brigade level. Although the men had different paths into the military, their experiences brought each to the command of troops in Afghanistan.

What both men agreed on was that the training they received prior to their deployments to Afghanistan could not possibly fully prepare them for battle. Neither criticized their training in any way but Captain Miller explained how the first experience of an IED blast jolts soldiers to the reality of their situation. Captain Posse noted the reality of war was far beyond any theory of warfare taught in a classroom, while Captain Miller said that training could not adequately prepare him for the feeling of responsibility for those serving under his command.

Dr. Stelzenmueller asked the two men about possible parallels between the tribal culture in Afghanistan and the tribal culture of the military. For Captain Posse, it was critical to understand the importance of accepting offers of hospitality. For Captain Miller, he adopted the philosophy for his men to “act like you’re the biggest, baddest tribe around” in order to be respected by the local tribes.

The Konrad Adenauer Foundation supported the security discussion at the conference, as well as a kick-off breakfast with Peter Beyer, Member of the German Bundestag. During an intimate breakfast discussion, Mr. Beyer discussed a range of topics from finance to trade to health policy. Mr. Beyer also noted the need for greater cooperation between American and German parliamentarians on policy issues, citing nanotechnology standards as a topical example.

Other areas of discussion at the 5th Annual German Conference at Harvard included the Euro Crisis, Energy and Leadership. All are topics that the Konrad Adenauer Stiftung looks forward to examining further during future programs in 2012.