A study based on the interactive simulation model meeting “Prospects of the 2022 Election’s Outcomes in Lebanon and their Fallouts”.
5 mai 2022 Informations de commande

This study is based on the interactive simulation model meeting that was organized by Konrad-Adenauer-Stiftung, Lebanon Office between representatives from the traditional established parties, the traditional opposing groups, the post-uprising political initiatives and representatives of the regional and international powers concerned with the Lebanese affairs.

It summarized the roundtable discussion that covered a realistic diagnosis of the crisis and the political and non-political dilemmas. The study ended with conclusions at the national, political and constitutional levels. 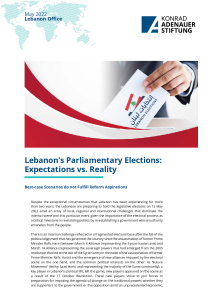