Russia's and China's Approaches to the Arctic: Threats or Challenges for the Global Community?

An Analysis of Russia and China's Role in the Arctic Region

Fittingly, as Russia took over the presidency of the Arctic Council in May 2021, KAS Canada presents this new study. This Franco-German co-authored study is a good example of intra-EU cooperation on future issues important to all NATO members.

Russia and China are driven by domestic political pressure and the desire to be recognized as global players. Both states acknowledge mutual interests in the Arctic region – Russia’s development of its country’s northern regions, China for the exploitation of its resources, and new lines of and military collaboration.

Russia will utilize its chairmanship of the Arctic Council to increase its influence by offering scientific programs by way of door openers and intends to cooperate with foreign scientific institutions. Scientific diplomacy has so far proved successful for both Russia and China. Cooperation between Russia and China will enable each country to counterbalance the US-led western powers and influence with respect to strategic affairs and international law for as long as the entente continues. Russia and China will continue being both Janus-faced with respect to international law and in Like other rising powers in history, China is now expanding beyond its borders.

The polar regions, the deep seabed, and outer space are China's "new strategic frontiers," strategically important areas from which China will draw the resources to become a world power. In a little over a decade, China has gone from being a small player in the Arctic and Antarctic to a major player. China is now a member of a unique club of nations, the Polar Powers.

It is clear that Canada has a direct interest in how NATO addresses Russia's threat to the Arctic region. Canada and the United States are already exploring arrangements to upgrade or replace the Northern Warning System radar network in the Arctic, which provided a critical early warning capability against a possible Russian incursion into North American airspace. Nevertheless, Russia poses a challenge that will require a multinational response with other NATO nations. 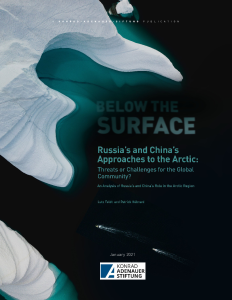 Russia's and China's Approaches to the Arctic
Herunterladen