The global energy sector has remarkably shifted during the last decade and has strengthened worldwide efforts for decarbonizing it for achieving the 1.5°C target in context of the Paris Agree­ment to mitigate global warming and avoiding disastrous impacts across the globe. A growing number of countries has adopted net-zero pledges. Equally, an increasing number of companies and equity funds have also begun to reflect a growing sense of attention for accelerating a reduction of their carbon footprint and promoting a clean energy transition.

For all countries, the energy transition to a non-fossil fuel age, determined by the interplay between fossil fuels and renewables, is a challenging, risky, and vulnerable process in the forthcoming decades. An unprecedented pace of the energy transition is accompanied by a high degree of unpredictability, “tsunamis of innovation” and non-anticipated disruptive developments as well as cascading impacts.

Despite an increasing worldwide support for net-zero emissions target by 2050 and 2060 - including by the EU, U.S., China, Japan, South Korea, and some other countries - and the expansion of renewables as well as many other green technologies, the world is still on the pathway to warm up by 2.5-3°C by the end of the century. Ahead of the COP26 global climate change summit at the end of this year in Glasgow, the discrepancies between major countries as well as much more ambitious energy policies for the green energy transition and the realities on the global energy markets have grown further during the worldwide pandemic.

The present energy transition affects particularly the global electricity sector, which is being transformed by the three reinforcing strategic trends of ‘3 Ds’: decarboni­za­tion, digitalization and decentralization.This energy transition is based on the integration of renewable energy sources (RES) and other distributed energy resources. It is highly dependent on modernizing energy infrastructures (especially electricity grids) and fundamental reforms of regulatory frameworks to accommodate the shifting energy supply structure at a time when societies are becoming ever more dependent on the stable functioning of critical energy infrastructures (CEIs). But political decision-making and regulators are often unable to adapt quickly enough to disruptive technology innovations to benefit from these new technological options such as enhancing safety, accessibility, connectivity, productivity, efficiency and sus­tain­ability of the energy transition. The IEA warned in its annual ‘World Energy Out 2019’-report: “The faster the transformation required – and the scientific evidence shows that this push needs to be very rapid indeed – the greater the risk of poor co-ordination or unintended consequences for the reliability or affordability of supply.”[1] Unless the difficult and complex energy transition with its huge associated costs is planned and implemented carefully, it could worsen energy inequalities, energy-related poverty, undermine economic growth and lose public acceptance.

Given the electrification of end uses and the proliferation of low-cost renewable power generation technologies, electricity is emerging as the strategic energy carrier of the 21st century. The creation of ‘prosumers’ (energy consumers simultaneously becoming energy or electricity producers) and the redistribution of economic as well as political power offers new opportunities for participation, investment and strategic influence to new centralized powers (i.e. internet giants such as Facebook, Amazon, Netflix, Google and others) as well as to new players on the local level. But political decision-making and regulators often adapt too slowly to be able to benefit from new options arising from disruptive technology.

But at the same time, societies and states are becoming ever more dependent on the stable functioning and resilience of critical energy infrastructures against increasing sophisticated cyberattacks. Supply chains will increasingly shift along the decarbonization and include hydrogen, and batteries for electric vehicles, which will also increase the global dependence on critical raw materials (CRMs).[2] But these supply chains from mining to end-products are often much less transparent than traditional fossil fuel supply chains despite many efforts to improve industry practice for responsible and ethical sourcing during the last years.

Furthermore, the COVID-19 pandemic has caused more economic disruption and increased financial debts of the energy sector worldwide than the global financial crisis in 2008, the economic depression in the 1930s or any other event in peace time history with lasting impacts for at least the next decade.[4] At present, it is unclear how long the worldwide pandemic will last as the third wave of the pandemic is currently affecting many economies again. In 2018, over 200 million people (5% of the population) had still no access to electricity, and some 1.8 billion people (nearly 40% of the population) had still to rely on polluting and unhealthy cooking fuels and technologies. The global pandemic has also highlighted the criticality of electricity supply for hospitals, other healthcare services, other critical infra­struc­tures, teleworking and remote learning. Too often governments have overlooked or margina­lized potential supply crisis and have either no or at least insuffi­ci­ent emergency plans and built-in resilience capacities. Investing in much needed redundancies for cybersecurity or global pandemics is of course a cost factor. Insufficient investment in redundancies as part of resilient concepts may serve short-term interests but is contradicting long-term interests as those crises may turn out as much costlier than any preventive policies and investments.

How long the COVID-19 economic downturn will last and how large the impacts on the world economy will be as well as for the energy demand and greenhouse gas (GHG)-emissions is almost impossible to forecast concretely as the second wave of Covid-19 currently highlights in India. But the “polypandemic”[2] might have more long-term implications on economic recovery, the countries’ resilience and the world energy sector than anticipated last year. Improving access to finance often require more fundamental reforms at the global, regional and bilateral levels, which appears even more difficult in times of a deepening regional economic recession and rising state debts.

The full paper with all references and graphics can be found as a pdf in the appendix on the right side of the webpage. 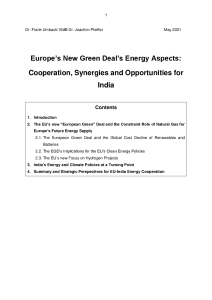