The War in Ukraine: Regional and Global Fallouts

On 23 May, NIAS Europe Studies, in collaboration with Kristu Jayanti College and Konrad Adenauer Stiftung, India, organized a one-day national workshop on the theme “The war in Ukraine: Regional and global fallouts,” at Kristu Jayanti College, Bangalore. The workshop was divided into three sessions, and participants across India presented on diverse topics such as the strategies of the US, Rus-sia, Europe, China, and the UN on the war in Ukraine. Presenters also focused on key issues, such as energy and the impact of sanctions. Fol-lowed by the presentation, each ses-sion was debated by discussants from the NIAS Europe Studies team and Kristu Jayanti College.
25. Mai 2022 Bestellinformationen

Ukraine and beyond: What next for US and Europe?

The key emphasis of the UK and Europe relations took place during the transition period from Donald Trump to Joe Biden. After looking into the develop-ments, it is important to look into the issues relating to cooperation between the US and Europe during the war and analyse the future impact on the transatlan-tic ties. Biden’s reversal policies have improved the US-EU equation in terms of trade, NATO, security, technology, and climate change. Along with this, the Ukraine war has helped progress the security cooper-ation between the two. Especially with the US efforts during the war in releasing the oil has helped Europe to reduce its energy dependency with Russia for a temporary period. Additionally, the Indo-Pacific dilemma, the need toward increasing maritime pres-ence has gained renewed attention for cooperation between the US and Europe. Keeping Europe’s security complacency, dependency issue with Russia, and the impact on Europe’s economy due to sanctions imposed on Russia on one side, on the other US’s fear for growing closeness between Russia and China, and the pressure to meet the demand for oil, the joint challenges faced by the US and the EU is best to be addressed together.
In the discussion round, the discussants provided their inputs on the presentation and the submitted paper. The discussants also suggested how the presenter could have looked at the individual equation between the US and Russia, and Europe and Russia in context of the war rather than look-ing at the transatlantic ties. They critiqued how the presentation could highlight the issues faced by the US and Europe due to war rather than re-stricting the focus on relations. Questions on the US, Europe and China triangle, future of US-Russia relations, impact of NATO’s expansion and state of the refugees in Europe were posed to Dr Upadhyay. Apart from the discussants, other re-search scholars also posed queries on humanitari-an aid and the US spendings, oil recession, future of supply chains, and the impact on climate change due to increased investments in security.
On bringing out the individual strategies, Dr Upadhyay responded that it would be tedious to look into individual perspectives and on the im-pact of sanctions. She added that economic isola-tion of Russia would be impossible to implement.
In terms of the equation between the US and Rus-sia she suggested that although the on-ground situation might not be favourable, both will main-tain good relations when it comes to space and diplomacy. On the question of refugees, she high-lighted that the acceptance rate of Ukrainian refu-gees into the US and Europe was high due to their relatable appearance and adaptability to work conditions.

To understand Russia’s strategies toward the US, a broad focus on the history of US-Russia needs to be analysed. Apart from the history, Russia’s ex-pansion, and Russia’s strategies in the War in Ukraine towards Ukraine and Europe were strate-gic enough to shape the world order. NATO’s ex-pansion in the eastern Europe has now become a critical subject to discuss as it will have a future influence over relations between Russia and the US. The other potential areas of conflict between Russia and the US could be the Arctic Rivalry, which the Ukraine war will further complicate with NATO’s expansion in the northern Europe. Lastly a probable strategy for Russia could be to re-enact the cold war and to bring back the sphere of influence in the region.

To read the complete report please check the PDF on the same webpage. 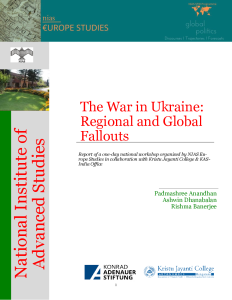