While the current focus of the policy-makers is on battling the second wave of COVID-19, it is the need of the hour to come to a prognosis of what a post novel coronavirus world may look like for the industry and masses. The pandemic has undoubtedly added momentum to arguments of economic developments, trade, foreign policy and even multilateralism. Hence, it is imperative to temper optimism with pragmatism, acknowledge the opportunities and challenges, and identify actionable measures. These reform initiatives will provide an impetus to the government and industry thought-leadership to work in partnership for the nation to begin talking about the forgotten idea of a 'Five-Trillion Dollar Economy' all over again. To have a robust discussion on these issues, the Madras Management Association, Chennai in partnership with the India Office of the Konrad-Adenauer-Stiftung organized a hybrid conclave on the topic "Free trade post-pandemic: Rationale vs. National" on Saturday, 17th April 2021.
18. April 2021 Bestellinformationen

Next: Can the supply chains shift out of China?

Next: Low tech jobs will be more in demand. Indian industries will take the short cut and demand protection rather than compete?

Next: Do the industries coming to China also bring their dual circulation system or manufacturing lines and R and D to China?

Next: Given the recent budget, would the disinvestment process will be taken forward?

Next: BRI is being pushed aggressively. So are the Chinese on the right track? 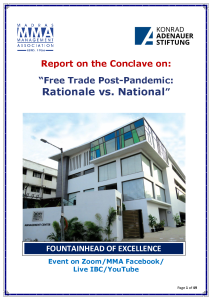