To understand the relevance of the transition from globalisation to glocalisation and to unveil the potential that it displays in the context of the New Normal for a country’s economy and society, the Federation of Indian Chambers of Commerce & Industry (FICCI) in partnership with the India Office of Konrad-Adenauer-Stiftung, organised the 5th FICCI-KAS Virtual Dialogue ‘From Global to Glocal in the New Normal’ on May 29, 2020. The webinar can be viewed on YouTube: https://youtu.be/8vrMAquhRAE
1. Juni 2020 Bestellinformationen

PM Modi has stated: “Way ahead lies in Local, local manufacturing, local markets, local supply chain, local is not merely a need but a responsibility. Be vocal about local”.

The fifth FICCI-KAS Dialogue aimed to analyse how the shift from global to glocal will pan out in a world affected by the global pandemic.

The dialogue witnessed the presence of distinguished panellists from industry, academia and policy think tanks, with expertise in their respective fields, who shared their perspective on the effect and efficacy of a transition from global to glocal.

- Out of the two processes, globalisation is facing a backlash while glocalisation has become the buzzword.

- Glocalisation, which is an amalgamation of globalisation plus localisation, is not a new term and basically refers to the distribution of global products and services which form an integral part of the local economy.

- Glocalisation is an on-going process which involves taking an idea and adapting it to localised sentiment/ demand/ conditions wherein global products from the West are adapted to suit local tastes such as in fast food chains.

- MNCs were glocal in nature despite their parentage and ownership being global but they think locally and they produce global services which are attuned to cater to local demands. Here, the key idea lies in producing local products with a global standard.

- The idea of glocalisation is practical but it has to be applied smartly without disrupting the quality of services. In the transition from global to glocal, one needs to address the issue of deindustrialisation as well as ensure that there is an interlocking of structures in the economy.

- In the light of the present pandemic crisis, where changing supply chains are sometimes causing market disruption, it is imperative that glocalisation isn’t misunderstood as a mechanism for countries to become protectionist and disrupt global supply chains but instead they should accommodate new supply chains as well as create jobs locally.

- It is a given that monopoly capital world over, makes repeated moves for centralization and concentration of financial, industrial and labour power and accumulation at the cost of other competitors, labour, and distribution. This also widens inequality between nations and people. Covid-19 Pandemic exposed the globalised system where such concentration led to great shortage of supplies, including medicines as value and supply chains broke down while millions of workers have been laid off. In addition, there was flight of capital and all countries are turning inwards or ‘Glocal’ as much as they can.

- Greater value needs to be derived from digitisation and micro-scale firms need to be digitised in order to be a part of glocal supply chains.

- For envisaging a smooth transition from global to glocal, the foundation must be strengthened by introducing reforms in the education and healthcare sectors, while  a balance between labour, service sector and industry must be maintained with businesses and industries to providing basic amenities to migrant labours. Trade policy architecture should adapt to the new normal. Trade promotion policy incentives should focus at instituting a smart nimble structure for encouraging innovation and intelligent leverage of global best practices.

- COVID-19 is a disruption to the global system wherein radical reforms are being done by the Governments. In India, there is a necessity to have integration of the informal economy and workforce with the formal one. The Government has to efficiently manage the shift from global to glocal. Glocalisation should dovetail to all segments of the society.

- In shifting from globalisation to glocalisation, it is necessary to identify the weak links and prioritise fundamentals. It is important to move towards unshackling the spirit of competitiveness.

- India being a federal structure, it is important for the Centre and the States to have a consensus over matters of the economy and to work together where Centre can prescribe policies and the States execute them.

- India had a history of a self- sustaining village economy whose weakness lay in the exploitative informal lending structures and inaccessibility to modern technologies and methods. This self -sustaining and reliant model needs to be modernised by adding formal banking structures, availability of digitisation, modern primary health care structures and better schooling. It would lead to a renewed cohesive economic and social life based on good and transparent governance in the villages and small towns. Many Indian industrial towns from Kanpur, Bhillai, Varanasi, Coimbatore suffered de-industrialization, especially since the 1980’s globalizations. The industrial base of these towns must be restored, modernised and re-financed to suit the needs of modern consumers. Co-operative system and de-centred R&D should be revived.

- ‘Vocal for Local’ and ‘Aatmnirbhar Bharat’ is about contextualising and taking best practices of the world, applying them to India and creating best of goods and services.

- The new economic revolution is set to unfold in the MSME sector which can accrue financial benefits. There is a need for empowering MSMEs and MSME related reforms are critical for the country’s socio-economic development. For example, Government’s initiative of propelling the message of Indian Khadi is a step towards glocalisation which has not only empowered many people but has also created jobs.

- Skill development is crucial which can lead to better paying jobs and can generate capital and entrepreneurs.

- With India moving towards digitalisation, the focus has to be on improving digital infrastructure and delivery mechanism of goods and services. The key lies in execution and the Government has to devise better mechanisms which are sustainable and inclusive. The focus should be on Research and Development institutions; Acts like MNREGA and food security, and PDS can facilitate industrialisation locally, as these support labour. This would match with our commitment to the SDGs. 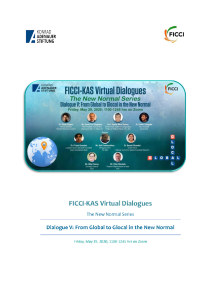