The Federation of Indian Chamber of Commerce and Industry (FICCI), together with the India Office of Konrad-Adenauer-Stiftung, organized a Leadership Fireside Chat with Shri Bhupender Yadav, MP and Chair of FICCI Forum of Parliamentarians on ‘Politics and Governance in the post COVID scenario’ on 16th June 2020. This virtual session can be viewed at: https://www.youtube.com/watch?v=7Jbw9ASmdf8
18. Juni 2020 Bestellinformationen

The world is faced with an unprecedented crisis which has had a comprehensive effect on political, social, economic aspects of life. The whole world, as a civilisation, has been affected by the pandemic.

There has been a paradigm shift in the way that countries have been operating. Governments, all over the world, have been trying to cope up with and mitigate the harmful ramifications of the pandemic.

The issue of political decentralisation, changing dynamics of market economics and public policy discourse, have come to the surface.

With the changing dynamics of politics in the current scenario, it is important that we understand the varied aspects of the political and societal living as well as assess the importance of democratic legitimacy with respect to efficacy, legal accountability and social inclusion in the context of the New Normal.

Over the years, there have been changes in the political sphere ranging from conduct of elections for the first time to forming a government to the evolution in political communication with the use of radio and TV.

Corona has propagated this change, which was inconceivable a few years or months ago. The means of communication have changed wherein digital technology has been inculcated into people’s lives through the aspects of work from home, telemedicine and digital consultations, online schooling, online governance and so on.

The 60-days lockdown period has created a consciousness amongst people and made them prioritise health and digital technology. Post corona, in politics, the world will have to get used to these changes in the New Normal where politics or governance will be data driven.

The Government is working to bring about data protection acts and devise new norms and policy reforms to make the New Normal people-friendly.

Local governance has also come into limelight in the present context, where people were being served by the local authorities in terms of essential supplies, food and medicines, sanitation facilities. In the New Normal, local governance will play a major role than ever before.

For India, the period from lockdown to a graded cautious opening of the economy, has led to a restored confidence that the healthcare system has been readied.

The healthcare system has been well equipped in the case of supply chains wherein around 4 lakh PPEs have been manufactured over the past few months, making India a major centre for medical supply chain.

In the lockdown period, the Government took various measures for the poor and migrant labours. Some major initiatives, which were taken in the last 5 years such Pradhan Mantri Jan Dhan Yojana, Aadhar and provision of mobiles, have been instrumental in helping the needy and the vulnerable during the pandemic crisis.

The Government has also eased the labour laws and introduced various reforms. About 54 conventions of the International Labour Law Organisation, have been ratified by India, which have a humanitarian approach and will benefit the industry.

Additionally, the Minimum Wages Act, Payment of Bonus Act and the Equal Remuneration Act, have already been passed by the Parliament.

The Industrial Dispute Act, Industrial Empowerment Act and the Trade Union Act, have been combined to form the core of the industrial act, which will be discussed in the next session of the Parliament.

The plantation labour, contract labour, working journalists have been categorised in the occupational safety and health code.

Another labour code has been designed to deal with social security aspect- Law of Compensation for Labours for provident fund. This is a big reform in the industry and labour section in the country. In the Essential Commodities Act, the Government is planning to bring about amendments.

In India, to strengthen agriculture, which is one of the largest sectors, the Government has decided to advocate policies to benefit the agriculturists in the near future.

The Government has also called for measures to be taken by the industry to provide safe and hygienic working conditions to the workers and to adhere to the standard procedures of operation and social protection measures to create a conducive working environment.

Corona is a global crisis, which has shown mankind the importance of sustainable and inclusive development. Development cannot be done at the cost of others and measures such as conserving the depleting natural resources and saving our ecosystem, is the need of the hour. The human kind will have to make efforts in order to survive on this planet and to ensure a sustainable future for upcoming generations. 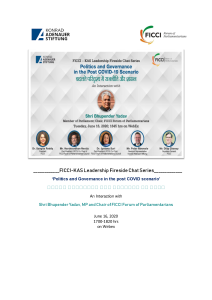