The rapidly spreading Covid-19 pandemic and the subsequent containment responses have led to severe supply chain disruptions with economic activity coming to a near halt in many countries including India. To have a robust discussion on the same, the Federation of Indian Chambers of Commerce & Industry (FICCI) together with the India Office of the Konrad-Adenauer-Stiftung (KAS) organised a webinar on the topic “Geo-Political & Economic Impact of Covid-19: Emerging Challenges & Opportunities and Way Forward for India” on May 27, 2020. The webinar can be viewed on YouTube: https://youtu.be/0zMJ8ST5JCw
29. Mai 2020 Bestellinformationen

The COVID-19 pandemic has come as a great shock for all of us and for the world economy at large. This unprecedented event is challenging the world order, bringing large scale geopolitical changes as well as creating a strong negative impact on the economic health of countries.

All leading economies in the world including the US, UK and countries in Europe and Asia have been adversely impacted by the consequences of the pandemic. This has evoked strong reactions from many countries and is impacting global economic relations. While the future remains uncertain and we may see many such events unfolding in the coming months, it is important that we understand what could be the likely implications of such possible outcomes for the Indian economy and how India could address the challenges and prepare itself to capitalise the emerging opportunities to foster its growth.

Mr Subhash Chandra Garg, Former Secretary (Economic Affairs), said that no country is self-sufficient and trade will have to continue. He added that there is a need to look at the efficiency of global value chain and reducing the cost of production.

Addressing FICCI-KAS webinar on ‘Geo-political & Economic Impact of Covid-19: Emerging Challenges & Opportunities and Way Forward for India’, Mr Garg said that the impact of COVID-19 will be temporary. However, the pandemic has impacted workers, businesses and governments severely and in such a situation, the government needs to address the issues.

Mr Garg said that Indian economy has suffered heavy losses due to the pandemic. The government should consider unlocking the lockdown by the end of June to relatively lower economic losses, he added.

Mr Navdeep Suri, Former Indian Ambassador to UAE said that skills of workers returning from foreign countries like the Gulf can be utilized in India in the absence of migrant workers who are returning to their native places. He added that with the emergence of COVID-19, sectors such as online education and telemedicine witnessed an upward surge and India should take advantage of such sectors.

Mr Vijay Gokhale, Former Foreign Secretary said that India’s FDI policy is good but the last mile connectivity needs to be improved. It is a golden opportunity for India to address this issue. He added that India needs to position itself strategically with the US and China. “It is an opportunity for India to leverage its relationship with the US and China for economic benefit of the country,” said Mr Gokhale.

Mr Ajay Shankar, Former Secretary, DIPP said that it is time for India to re-engineer its regulatory regime providing greater predictability and certainty to the system. India needs to re-strategize its policies and think of nuanced policy instruments so that when normalcy returns, the country can grow at full potential. He added that India should look at investment-led growth and green economy.

Mr Sidharth Birla, Past President, FICCI said that many countries having realized their large dependence on China-driven supply chains are looking at alternates. India is urging global players to look at India as a future alternative supply base. He added that it is almost certain we will see significant change in international relations, which is bound to impact India in more ways than one. It is critical for India to comprehend the essence of these changes and how global balances may change, plan how it should safeguard itself, and design suitable strategies to capitalize on emerging opportunities.

Mr Peter Rimmele, Resident Representative to India, KAS said that with COVID-19, the world is facing an unprecedented challenge but, in every challenge, there lies an opportunity. He gave a clarion call for closer partnership between India and Europe and urged India to unite with Germany over commonalities between the two countries. 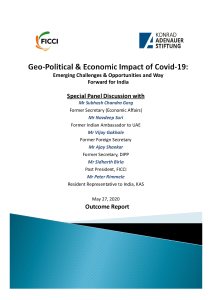