Dr. D K Aggarwal, President, PHDCCI, welcomed Her Excellency and gave a brief insight about PHDCCI and the relations between India and Germany.

H.E. Mrs. Tomar thanked PHDCCI and called it an excellent initiative to bring together the industry leaders of both sides. India and Germany are doing business for long and it is the right time for the Indian Inc to build on its competitive advantage as Germany is open to business and the national chambers like the PHDCCI have a great role to play in the same.

Mr. Peter Rimmele, Resident Representative to India of the Konrad-Adenauer-Stiftung highlighted the Indo-German trade relations stating that India is a trustworthy partner for Germany. During the pandemic, the Government of both the countries are working hard towards economic recovery.

Mr. Pradeep Multani, Vice President, PHDCCI, gave the formal vote of thanks and praised the Government of Germany on taking the proactive measures against COVID -19 and elaborated on the opportunities present for the Indian company to collaborate with their German counterparts.

Mr. Saurabh Sanyal, Secretary General, PHDCCI thanked the dignitaries and said that PHDCCI remains committed to promote the industry and support the government.

The session was moderated by Mr. Naveen Seth, Principal Director, PHDCCI and witnessed a participation of more than 140 industry members including 40 German companies operating out of India. 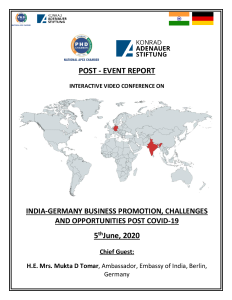