The conference was a joint initiative between Justice Adda and the India Office of the Konrad-Adenauer-Stiftung (KAS), bringing together scholars from different disciplines to discuss legal pluralism as seen in different parts of India and the ideas of justice that can be derived therein. Since the research on this topic has been scattered throughout different time periods as well as various disciplines, this conference aimed to bridge the gap between real-world discourses in legal pluralism and the existing literature.
23. April 2021 Bestellinformationen

The conference included five panels of paper presentations, and the launch of Justice Adda’s “Map-a-Forum”. All panels except Panel 4 followed a format where a short overview was presented by the author, and then a discussion initiated by a discussant, followed by questions from the audience and other authors. The fourth panel on the second day was a plenary panel that followed the traditional paper presentation format.

The conference began with remarks from Dr. Kalindi Kokal who welcomed the attendees and presenters to the conference and elaborated on how law, politics and anthropology influence the ideas of justice that emanate from various means of conflict resolution. Thus, any study of legal pluralism and ideas of justice in India, would inevitably include factors that relate to the caste, class and gender of the persons or community involved, as these factors influence the power dynamics within the justice system.

Mr. Peter Rimmele, the Resident Representative to India of KAS remarked that legal pluralism is often a forgotten and underestimated concept, and that rule of law should lie at the heart of any conversations in that sphere. Rule of law is a basic tenet of justice and can be seen to be the central theme of the KAS’s Asia program. He argued that India, being the diverse country it is, provides a fertile ground for the expression of legal pluralism. However, discussions on legal pluralism are not prominent in the country. He recalled the specific examples of the Khasi tribe in Meghalaya, the Panchayat system, and even the practices in ancient India that proposed notions of Neeti and Nyaaya to derive justice. In this context, legal pluralism often represents various kinds of justice such as social justice, environmental justice, economic justice, etc. Rimmele advanced that as the vision and ideas of justice keep evolving with time, he wondered if it would be easier to understand the causes of injustice rather than engage in the pursuit of understanding justice.

“All justice systems are means to an end, where the end represents peace in the society.” 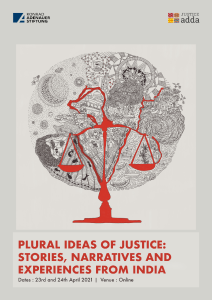