Madras Management Association (MMA) in collaboration with Konrad-Adenauer-Stiftung (KAS) presented a talk on the theme, “Covid-19 and Electoral Reforms” by Mr T S Krishnamurthy, Former Chief Election Commissioner of India through webinar on Wednesday, 03 June 2020. ORF, NGPL and PreSense were the event partners. The virtual discussion can be viewed at: https://youtu.be/Bt8-NKTU7T8
5. Juni 2020 Bestellinformationen

Group Captain R Vijayakumar, ED, MMA welcomed the participants. Mr Peter Rimmele, Resident Representative to India of KAS delivered the introductory remarks and set the tone for the event. He presented the German system of conducting elections and juxtaposed them with that of India, to examine if the positive features can be absorbed in the Indian scenario. “The German system combines the principle of ‘First past the post’ and that of proportional voting system,” he explained. He also spoke about the funding of German elections and the importance of consensus building.

Mr T S Krishnamurthy, Former CEC, covered in his address, the need for introducing several reforms in the Indian electoral scene, especially in the post Covid-19 phase. He took on a range of questions posed by the event partners-KAS, ORF and NGPL and viewers, on electoral reforms and answered them with aplomb, bringing in his rich experience.

Among other things, the following Key Issues were discussed pertaining to the Indian elections, in the post-Covid world:

- What lessons can India draw from the election process of mature democracies like Germany, Australia, UK and US?

- How can we convert the Covid-crisis into an opportunity for introducing many reforms?

- What are India’s key problems in conducting elections?

- How can India implement public funding of elections, rather than state funding? Should we limit the election spending by parties?

- How can we minimize corruption through online campaigning and digital meetings instead of the conventional ones?

- What will be the role of social media and can we regulate them?

- How can we introduce internet voting and mobile polling booths?

- How tamperproof are EVMs?

- Can we restrict the number of parties and independent candidates?

- What can be done to stop unholy post-poll alliances forming governments?

- Why can’t the duration of election process be shortened?

- Can we recall non-performing candidates?

- And the million-dollar question: Is one nation, one voting feasible?

Mr T S Krishnamurthy said that the need for electoral reforms is often talked about but rarely do the ideas that are expressed, get implemented. But Covid-19 has given us an opportunity to take up many reforms. He stressed that electoral reforms must happen in Asia and Africa.

He advocated introducing mobile polling booths and internet voting for senior citizens and physically challenged. He expressed confidence that social distance can be maintained in conducting elections and pointed out how South Korea could recently conduct elections calmly and peacefully, amidst the spread of coronavirus.

He explained how public funding with 100% Income Tax exemption can lead to transparency and replace the highly questionable electoral bonds. He was against parties ditching their pre-poll alliances and forming post-poll alliances, taking the people who voted them for a ride. “I am not against this practice. But let them go for fresh elections, face the people and get a new mandate,” he argued.

Mr Vijayakumar moderated a Q&A session at the end of which he proposed the vote of thanks. 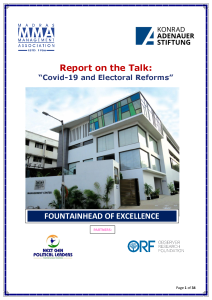