On Tuesday, January 16, 2018, His Beatitude the Patriarch Cardinal Mar Bechara Boutros al-Rahi and His Excellency the Patriarchal Vicar Archbishop Paul Sayah received at Bkerki the representative of the Konrad Adenauer Foundation in Lebanon Dr. Malte Gaier, the foundation representative for interreligious dialogue Dr. Otmar Oehring and the program manager for the Lebanon office Mr. Khalil Toubia in a visit to discuss the situation of Christians in the Middle East and in Lebanon.
19. Januar 2018 Bestellinformationen 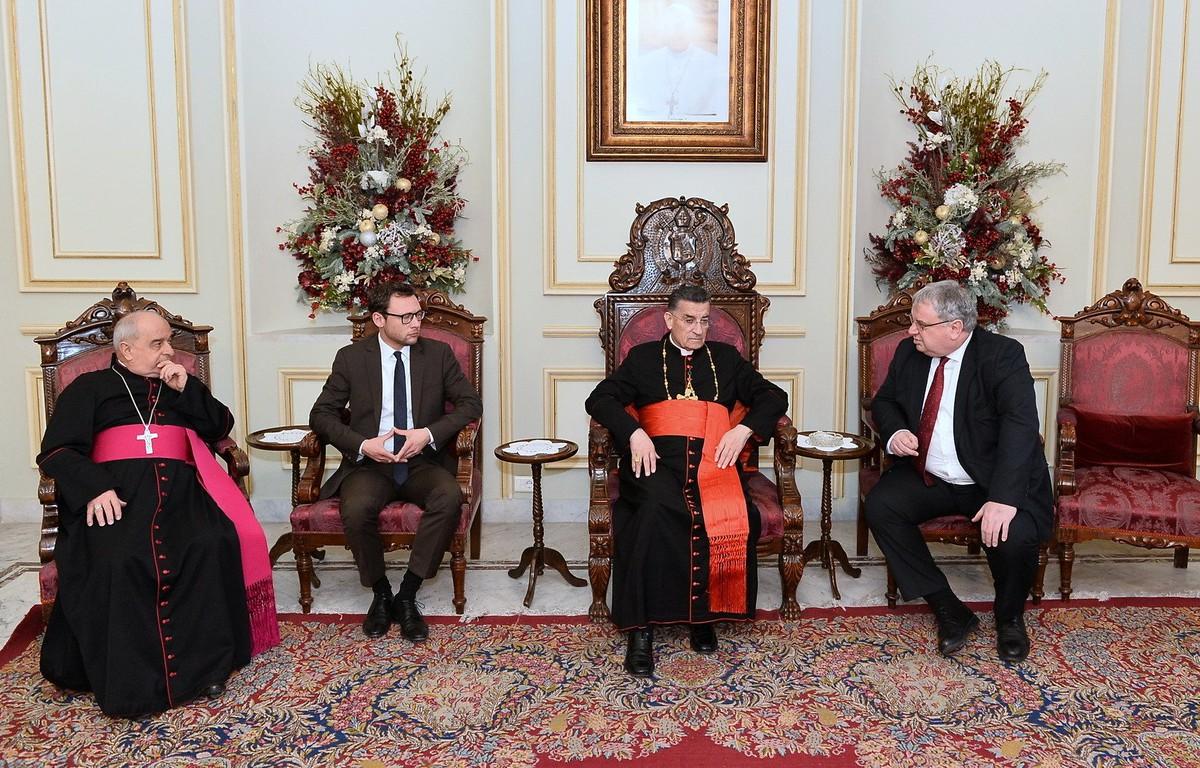 During the meeting, Dr. Gaier said: "The Adenauer Foundation is focusing its attention on the situation of Christians in the Middle East and in Lebanon and believes that there are many things that need to be done and completed to help Christians in the region, whether economically or otherwise."

He also said that "The help of the Christians in Lebanon is not limited to helping only the displaced Syrians but also the Lebanese. The international community is also very supportive and attentive to them, just like our institution, which has built excellent relations with Lebanese society last year and hopes to further deepen these relations."

Dr. Oehring said: “We have listened to the details of His Beatitude's recent visit to Saudi Arabia, which was very unique and paves the way for further dialogue among different religions."

Oehring added: "I expressed to His Beatitude my expectations for the outcome of this visit, especially on the level of the relationship between Muslims and Christians in the region, and listened to his accurate reading of the situation and future of Christians in the Middle East and the region amidst the crises that result from the wars that ravaged it, especially in Syria and Iraq."

Oehring also said: "We have touched upon his hope for a better future but this hope is accompanied by great caution. There are many problems and we must agree to solve them. The war in Syria has had a great negative effect on Lebanon and the region, and as His Beatitude stressed, it must be put to an end. We hope that a number of displaced Syrian Christians will return to their land despite the great difficulty of this step."

Oehring considered: "The situation in Iraq is still complicated, because what the country is witnessing today is a civil war that is forcing the remaining Christians to leave their land and seek a safe place. The purpose of my visit to His Beatitude, with whom a close friendship links us, was to have his blessing and listen to his objective and realistic reading of what is happening in Lebanon and the region, especially in the case of the Christians and their situation, and convey them to those concerned in my country."