Conference based on findings of KAS book on journalism education

von Manuela Anastasova
During the conference "Requirements for modern journalism education" on 28th March in Sofia outcomes of the KAS survey among journalism students in South East Europe will be presented.
24. März 2017 Bestellinformationen

The "Task Force Journalism Education" of KAS Media Program South East Europe has published a book based on a research among students about their motivation to study journalism. The survey was conducted from February to March 2015 in Albania, Bulgaria, Croatia, Romania and Serbia with 531 students from state and private universities. The outcomes and the book were presented during the South East Europe Media Forum on 22nd November 2016 in Belgrade. It will serve as a basis for a public debate with politicians, media managers and other stakeholders on possible education reforms during the conference in Sofia.

Initiated by KAS, the working group was founded in May 2013. It consists of university professors and other media experts from the region and Germany, who discuss the framework conditions and the future development of journalism education in their countries.

The book is the second project of the working group after a publication with country reports on the status quo of journalism education in Albania, Bosnia and Herzegovina, Bulgaria, Croatia, Macedonia, Romania and Serbia. 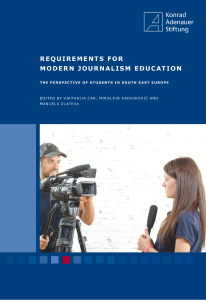