Launch event of the Volume I of The Next Digital Decade

Together with Digital Asia Hub, KAS has published two volumes of the edited series The Next Digital Decade: Case Studies from Asia. In order to celebrate the launch of the publication, two online events have been planned. The first event “Digital Asia Future”, which took place on 23 September 2021 via Zoom platform marked the launch of the first volume of the series.
1. Oktober 2021 Bestellinformationen

Traces and Divides, which compiled of 12 case studies written by scholars and practitioners across Asia, is the first volume of the publication series The Next Digital Decade: Case Studies from Asia. This volume tries to trace the impact of the Internet on society, politics, and life in Asia, while also identifying the many divides that persist in this digital era. 4 main areas of focus are covered in this volume, namely data monitoring and tracking, social media governance and civil engagement, e-commerce and public innovation.

The launch event started with the welcoming remark by Ms. Malavika Jayaram, the inaugural Executive Director of the Digital Asia Hub (DAH). She thanked the colleagues from KAS and DAH as well as all the authors for contributing to this publication project. She further explained the key interests and objectives of this joint publication project were to elevate work done by Asian scholars and experts who are doing interesting research within the region and about the region. Another objective is to share the lessons learnt from Asia, since there are so many new trends and pioneering technological development happening in Asia.

After the welcoming remark, a video highlighting authors’ insights about their case studies was played to provide audience an overview of the diverse topics discussed in this volume.

Next, a panel discussion with a focus on the trends in media ecosystems and disinformation moderated by Dev Lewis, the Research Fellow and Programme Lead of DAH, began.

The first speaker was Yuen-Ying Chan. She is an award winning journalist, media consultant and honorary professor at the University of Hong Kong. In her opening remark, She gave a broad overview about the major trends and concerns about the media ecosystem and disinformation. Although there are some encouraging development, in which she saw more bottom-up and joint effort by different social sectors in dealing with disinformation problems, there are also increasing trend of weaponizing fake news as propaganda by various regimes to serve their own political agenda. She also gave remarks on the roles of governments. She saw there are increasing government effort in the region to deal with fake news, but on the worrying side some governments appeared to be using the newly introduced regulations to silence opposition critics. For the role of big tech platform, they are now putting more effort on handling the problems of fake news and hate speech due to increasing pressure and criticism from public. Speaking of the future of journalism, she mentioned there is an urgent needs of reinventing journalism’s business model to survive in the shrinking advertisement market. Finally, as an outlook in the future, she urged the collaboration among academy, media and civil society, and among regions in exchange of experience and expertise in order to win the battle of disinformation.

The second speaker was Helani Galpaya. She is the CEO of LIRNEasia, a pro poor and pro market think-tank working on digital policy issues in the Asia Pacific. Based on the overview from Ms Chan, she continued to talk about the grassroot effort in dealing with fake news. She agreed it is encouraging to see there are increasing numbers of fact checkers appeared in many countries, but the major problem they are facing is funding. They need a more sustainable funding in order to operate continuously. Another challenge is to scale up the impact in order to change the narrative of the disinformation, as disinformation usually went viral instantly before it is able to be fact checked. This is also related to education of the general public to strengthen their digital awareness. In addition, she also touched upon the government policies and regulations in this matter and gave a number of examples of laws that passed by various countries.

The third speaker was Kathleen Reen. She is the Senior Director of Public Policy and philanthropy at AIPAC at Twitter. In her remark, she gave several examples of Twitter’s effort to help tackle the problems of disinformation and misinformation, improve public discourse and uphold transparency. For example, Twitter launched its first notification services with government and civil societies to allow them to deliver their messages as quick as possible during the early outbreak of pandemic in order to avoid the spread of rumours. In addition, Twitter maintains open API and the data is available for free to many data engineers and scientists all around the world, which can help civil societies to understand the mechanism of state sponsored disinformation by analysing the publicly available data.

During the panel discussion, the speakers have touch upon various topics based on the opening remarks, including the future of journalism, language barriers of developing AI algorithm for fact checkers learning, the importance of rule of law in enforcing social media regulations, emerging technology in media and censorship etc.

In the closing remark, Christian Echle, Director of KAS Political Dialogue, mentioned that the panel discussion serves as a pars pro toto for the launched publication, in which the main idea is to promote digital transformation with balancing the positive and negative impact of it. The discussion is a good starting point for collaboration as well as to look at different countries’ experience and to learn from each other. In addition, he also thanked all the guest speakers for the fruitful discussion, especially It includes perspective from academia, civil societies and social media companies.

The Next Digital Decade: Case Studies from Asia
Volume 1 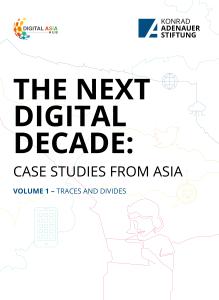