Moving into Our Digital Futures

Online Launch Event of the Volume II of The Next Digital Decade: Case Studies from Asia

Together with Digital Asia Hub, KAS has published two volumes of the edited series The Next Digital Decade: Case Studies from Asia. In order to celebrate the launch of the publication, two online events have been planned. The second event “Moving into Our Digital Futures”, which took place on 30 September 2021 via Zoom platform marked the launch of the second volume of the series.
8. Oktober 2021 Bestellinformationen

Spaces and Futures, which compiled of 12 case studies written by scholars and practitioners across Asia, is the second volume of the publication series The Next Digital Decade: Case Studies from Asia. In addition to the first volume Traces and Divides which tries to trace the impact of the Internet on society, politics, and life and divides in Asia, this volume took a more future looking perspective that explore possible approaches to the challenges brought by the next wave of digital transformation and digital disruption. Four main areas of focus are covered in this volume, namely adapting to new workspaces, building public infrastructure, ethical tech and securing health.

The launch event started with the welcoming remark by Christian Echle, Director of KAS Political Dialogue Asia. He mentioned one of the objectives of the volume II of this publication project is to look at policies in the area of digital transformation that can serve as role models to the other regions of the world. Besides, the event is a good starting point to build a bridge between the Asia and Germany/Europe to see if there are similar challenges faced by both regions and to share some best practises for policymaking.

After the welcoming remark, a video highlighting authors’ insights about their papers was played to provide audience an overview of the diverse topics discussed in this volume.

Next, a panel discussion, moderated by Dev Lewis, the Research Fellow and Programme Lead of DAH, with a focus tech development and policies in China, Singapore and Germany began.

The first speaker was David Li, the Executive Director of the Shenzhen Open Innovation Lab in China. He shared a story of how Taobao, a consumer e-commerce platform operated by Alibaba, provided opportunities to rural village to improve their living by selling their products online through Taobao. Due to the thriving of e-commerce in China, one of the poorest villages has transformed itself into a prosperous e-commerce hub with annual sales up to 7.2 billion RMB in a few years. He said the entrepreneurship and the willingness of the people to explore with new technologies are the two main factors for the success of this village.

The second speaker was Cheryl Chung, the Programme Director, Executive Education Singapore Futures at the Lee Kuan Yew School of Public Policy, National University of Singapore. She shared her experience as a future thinking planner for the public sector and shared some of her insights about how autonomous driving technology can shift our future. She mentioned several paradigm shifts will occur when this technology becomes mature, for examples, from the government perspective, more charging stations will have to be planned to replace gas stations; the traditional thinking towards owning a car may have a fundamental shift towards car sharing concepts in the future, but this may only apply to cities where good public transport infrastructure exists.

The third speaker was Lola Attenberger. She is the Researcher at the Digital Society Institute EMST Berlin. In her remarks she talked about the role of German politics in the digital transformation and what can be expected from the new government after the German election. She mentioned that although previous government was often criticized for not doing enough to push forward digital transformation, there were still some progress including introducing several digital tech related strategies (e.g. Industry 4.0, AI Strategy etc.). She expected that the new government would strengthen to foster innovation through further digitalization, strengthen investment on strategic technology sectors as well as improve education through digitalization.

During the panel discussion, the speakers have discussed about various topics related to digital policies, including the demand of knowledge transfer of new technologies from the region to the other parts of the world, upskilling of labour force in China, digital policies in related to manufacturing and industrial policies in Germany, etc.

Malavika Jayaram, the inaugural Executive Director of the Digital Asia Hub, summarized the panel discussion with “The future is a foreign country. They do things differently” (a modified version of the famous quote by an English author LP Hartley) in her closing remark. She further explained that there is no single way of future where there is only one solution, but multiple futures that have different approaches to respond to new technologies can coexist, echoing the case studies shared by the speakers during the panel discussion and in the publications.

The Next Digital Decade: Case Studies from Asia
Volume 2 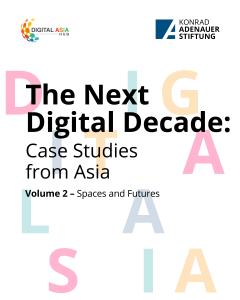