The Rule of Law Programme Middle East / North Africa of the Konrad-Adenauer-Stiftung organized an international symposium on recent developments, challenges and reform trends regarding constitutional control in the MENA region, that brought together the results of a series of expert meetings which the regional Rule of Law Programme, together with the Arab Association for Constitutional Law, has carried out over the course of the last two years. The symposium was held from 15th to 17th April 2019, in Beirut, Lebanon.
23. Mai 2019 Bestellinformationen 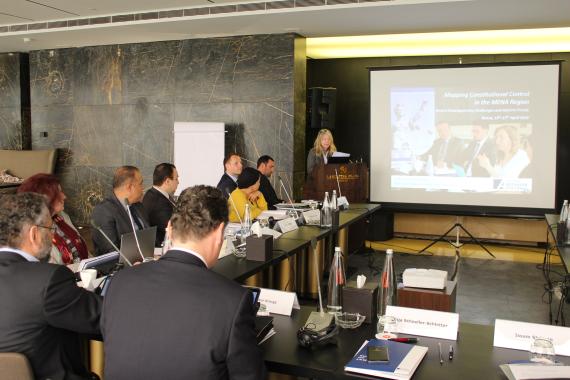 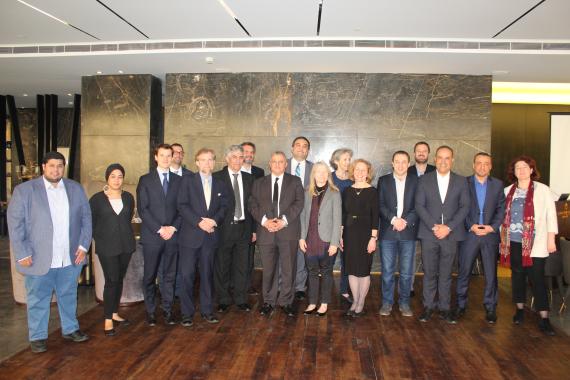 Participants of the Symposium 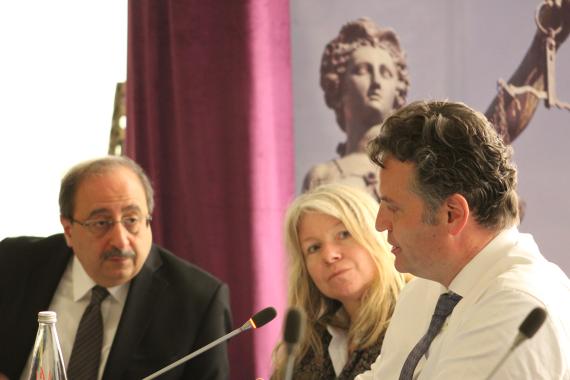 Ghassan Moukheiber, Former Member of the Lebanese Parliament, Anja Schoeller-Schletter and Günter Krings, Parliamentary State Secretary at the Federal Ministry of the Interior, Building and Community, Member of the German Bundestag 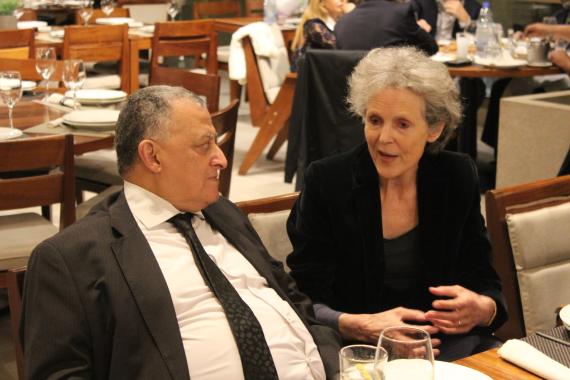 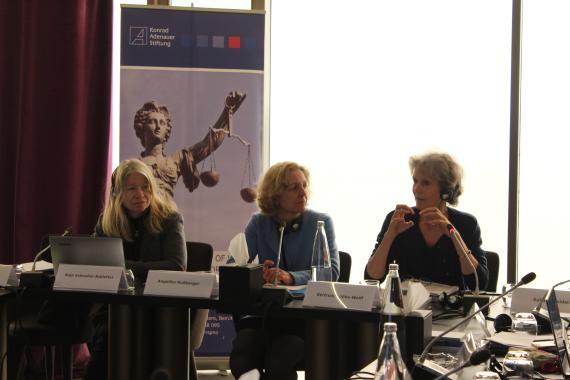 Anja Schoeller-Schletter, Angelika Nussberger, Vice-President of the European Court of Human Rights and Gertrude Lübbe-Wolff, Former Justice of the Federal Constitutional Court of the Republic of Germany

While the number of online collections of constitutional documents and comments has multiplied, a comprehensive survey of constitutional courts of the region, recent reforms and existing challenges is still lacking. The Rule of Law Programme Middle East & North Africa has moved to fill this gap:

Between the 15th and 17th of April 2019, the Konrad-Adenauer-Stiftung’s Rule of Law Programme Middle East & North Africa in cooperation with the Arab Association of Constitutional Law (AACL) organized an international symposium to bring together the results of a series of workshops organized within the project “Mapping Constitutional Control in the MENA Region.” The project comprises five workshops that took place between October 2017 and November 2018 in various countries, with presidents and members of constitutional courts and councils, international scholars, legal practitioners, and parliamentarians contributing.

The objective was to identify, summarize, and compare key characteristics and developments of constitutional control in the countries of the MENA Region. These include different nomination and appointment procedures, internal structure, existing review procedures, scope of jurisdiction, access to the courts, and the relationship to other state institutions.

As was said in the welcome address by Anja Schoeller-Schletter, Head of the Rule of Law Programme Middle East / North Africa, the symposium was designed as a forum to explore, compare and evaluate what options or solutions have turned out most successful in different contexts – aware that what may be a good solution in one country may not necessarily serve for another – and to inspire debates in regional or country-specific contexts. Anja Schoeller-Schletter underlined the crucial role that effective institutions of constitutional review, such as supreme courts, constitutional courts or councils with the corresponding review procedures in place may play for consolidating rule of law structures: Guaranteeing the constitutional order and individual rights and freedoms, while striking a balance to societal consensus, has been the key to sustainable socio-economic development, durable investment, innovation and stability in many countries. She underlined the fact that these institutions also need to be accessible in order to be relevant. Some countries of the region have therefore introduced new types of procedures, such as the „Question Prioritaire de Constitutionnalité“. Recently reformed constitutional jurisdictions need time to achieve their full and efficient working potential. It has taken decades if not centuries in numerous European countries – still suffering fall-backs – to establish a trusted rule of law environment with constitutional review institutions at the top.

In his keynote speech, Günter Krings, Member of the German Bundestag and Parliamentary State Secretary to the German Ministry of Interiors, made some introductory remarks on the German judicial system of constitutional control in order to raise points for discussion and comparison. He pointed out that effective judicial review is essential to the concept of the rule of law. The individual complaint is thereby one of the core proceedings before the Federal Constitutional Court of Germany.

Subsequently, keynote speaker Ghassan Moukheiber, former member of the Lebanese Parliament, gave a short introduction on the system of constitutional control in Lebanon. He raised the issue of constitutional councils being vulnerable to political influence– as seen in Lebanon – and their rather limited scope of jurisdiction in contrast to a constitutional court. The latter forms an independent judicial body on matters constitutional which is not part of the regular judicial branch. A wider diversity of council members - for example through a quota - might increase the public acceptance of its rulings despite its political connotation. This was also discussed with regard to the nomination proceedings which should take the country’s particularities into account. Here, the proceedings differ widely among the countries. While in some the king or the president possesses extensive rights, other systems chose to conduct judicial nominations through their parliaments. It was pointed out that effective guarantees to independence, immunity, the internal decision-making process and a sufficient number of law clerks that are able to cope with the workload, might be more important to the work of institutions charged with constitutional control than the mere appointment procedure.

In respect of the constitutional review of elections and electoral dispute, the participants stressed the political sensitivity of these proceedings, the need to ensure the qualification of the candidates and the possibility to challenge the outcome and procedure of their appointment.

In contrast to the above-stated importance of the individual complaint in the European judicial system, most of the countries in the MENA Region do not offer direct access to the constitutional courts or councils for individuals. In some countries of the MENA Region, a possible violation of constitutional rights by the application of law through administrative authorities is not included in the scope of jurisdiction of the constitutional court or council but merely the review of statuary laws. In addition, only certain groups may initiate the procedure of constitutional review, sometimes within a limited time frame (in Lebanon, this must be done within four weeks after the enforcement of the law). In other cases the referral must bypass another barrier, for example, the court of cassation which examines the seriousness of the complaint, before handing it on (or not) to the Constitutional Court, (often referred to as double filter system).

Before concluding the conference with remarks from the rapporteurs on the discussed topics, the Vice-President of the European Court of Human Rights, Angelika Nussberger, gave a presentation on past developments and future perspectives for the protection of fundamental rights in Europe. Thereby, she focused on case law with respect to Sharia Law, Islamic symbols, and freedom of expression in relation to religious behaviour. Among the major achievements of the court’s jurisdiction, Justice Nussberger pointed out equality rights between men and women. Gertrude Lübbe-Wolff, a former Justice to the Federal Constitutional Court of Germany, presented research on different ways of court internal decision-making processes and how these practices affect the role of constitutional courts. She emphasised that effective judicial independence includes the possibility for a court to reach an independent judgement, consisting of a ruling and reasoning. There have been two main traditions on how courts reach a ruling: Either per curiam in which the court as a whole (or at least, a majority of the court) reaches a ruling and its reasoning acting collectively and typically unanimously or per seriatim. For the latter, the ruling itself is at the centre of the decision and each judge may contribute an independent reasoning.

In conclusion, the need to further research on existing patterns of non-referral or non-compliance was mentioned. Despite some setbacks regarding the dismantling of constitutional justice through limiting the prerogatives of institutions, scope of review and political interventions, the developments in the region have shown a rising awareness for the importance of constitutional review as an instrument for judicial oversight. The participants agreed that the legal community shall make efforts to support the development of public constitutional awareness.

The findings of this conference will be published in a peer-reviewed book.