For the first time, this unparalleled research project has examined the views of people taking part in formulating or influencing Czech European policy. Civil servants, politicians, journalists and experts were asked to answer 27 questions in areas relating to the Czech Republic’s role in the EU, economic and institutional aspects of integration, partners in European policy and current issues. Vít Dostál, Alena Falathová, Filip Chráska, Tomáš Karásek, Viera Knutelská, Ondřej Kováč and Petra Pejchová have been part of the KAS and AMO research team.

Among the most important results obtained through the interrogation and its analysis, are the following:

•Access to the Single Market is the Czech Republic’s main benefit of membership in the EU. The Single Market will intensify further, although a fully liberalized market in services and energy will not be achieved.

•The European Union will follow the path of variable geometry. Fundamental institutional reform and a revision of primary law is not expected. The European institutions whose influence will strengthen most will be the European Central Bank and the Court of Justice of the EU. 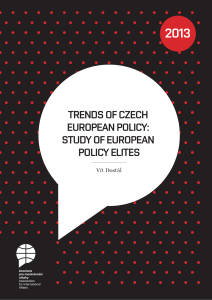