How a European Security Council could strengthen EU foreign policy

In order to strengthen the EU‘s foreign and security policy, the German chancellor Angela Merkel suggested the creation of a European Security Council. The following paper analyzes the possible tasks, the composition and the functioning of such an instrument.
6. September 2018 Bestellinformationen

1. WHY IS A EUROPEAN SECURITY COUNCIL NECESSARY?

The EU suffers from a lack of action in foreign and security policy: there is often no joint strategy in conflicts including those with important actors in the international political arena. Decision-making is far too time consuming. The reasons behind this are the member states’ different strategic, political and military cultures but also the unanimity rule. A transition to majority voting still seems too controversial. A possible solution should be the creation of a European Security Council (ESC), consisting of a small yet representative group of member states.

2. WHAT ROLE COULD A EUROPEAN SECURITY COUNCIL PLAY?

The ESC would function as the platform for security policy debates within the EU. This would enable it - in the run-up to important negotiations - to help the EU Member States find a common stance in international forums (OSCE, UN etc.). Hence, the ESC would be a place of European strategy building.

In principle, it should deal with all questions pertaining to the strategic direction of the European foreign and security policy. Implementing policies should remain within the remit of the competent institutions and committees.

The ESC could bindingly represent the European Commission or the respective EU Member States in international conflict resolution formats. On behalf of the High Representative, ambassadors of the ESC (e.g. foreign minister of the countries included therein), could act as delegates of the EU in conflict prevention formats.

Individual EU Member States could represent the ESC as “lead nations” on issues with which these states have a great deal of experience.

The ESC ought to formulate positions on the EU’s strategic international partners based on the European Union Global Strategy (EUGS) guidelines.

Notwithstanding, the member states still have the option of positioning themselves differently to the ESC. Such divergent conduct from the ESC would be more clearly visible to the international public than it is today, however.

Issues that should not fall within the remit of the ESC would include the EU’s enlargement policy or the resolution of CSDP missions and cooperation with NATO missions.

3. HOW WOULD THE SECURITY COUNCIL BE COMPOSED?

The Security Council would need to be both representative and effective at the same time. Based on its function, the ESC should be composed of the following members

For reasons of political and geographical balance, seats could be reserved for the following groups whose holders would rotate every 18 monthsThe ESC should hold a meeting in two configurations: the heads of state and government of the countries represented in the ESC could meet during the European Council Summits; the foreign ministers on the occasion of the EU Foreign Ministers Meeting. The High Representative would participate in both formats. 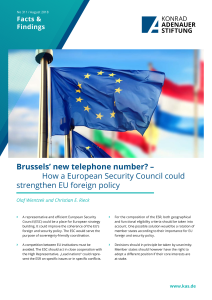