In 2016 KAS and University of Social Sciences and Humanities (USSH) jointly organized the conference “30 Years of Doi Moi: Success, Lessons and Prospects”. The publication of the proceedings of the conference is an offer to the esteemed reader to follow us in discovering the opportunities and challenges of Vietnam’s future reform course.
1. März 2017 Bestellinformationen

The thirty years of reform (1986-2016) is an important episode in the course of the development of the country, marking the overall maturity of the Party, the State and the People of Vietnam. The reform itself contains a revolutionary meaning and statute, creating the radical, profound and comprehensive changes. It is the great responsibility of the Party, struggling for the goals of wealthy people, strong country, democratic, equal and civilized society.


In general, over the thirty years of reform, Vietnam has obtained great achievements. The country has overcome the socio-economic crisis, escaping from poverty and underdevelopment and become a developing country, which has the middle income and is currently realizing the course of industrialization, modernization and international integration. The country’s economy has performed relatively well and is transforming into a market Socialist-oriented one. This is accompanied by the political and social stability, the defence and security consolidation, the social and cultural development, the promotion of the living standard of the people, the promotion of democracy, the national solidarity and the rule-of-law state. Apart from the achievements, the current reforms in Vietnam remain some limitations and weaknesses needed to be resolved in order to foster the country’s fast and steady development.


For 30 years, since 1986, Vietnam has moved on the Doi Moi, and the Konrad-Adenauer-Stiftung (KAS) in Vietnam has accompanied its host country for the better part of the time on this “New Way”. As a reliable partner of Vietnamese governmental and non-governmental institutions, the Konrad-Adenauer-Stiftung has supported the public discourse on a wide array of reform issues, such as the development of a state-of-law system or the revision of the constitution.


The conference “30 Years of Doi Moi: Success, Lessons and Prospects” co-organized by KAS and USSH brought to light not only the achievements of Doi Moi, but pointed out some limitations as well as persistent and newly emerging challenges, which point at the necessity to continue with bold economic reforms, to adjust the strategies of international relations, but most importantly, to initiate further substantial political reforms. According to many of the presenters, only with a comprehensive reform-approach, Vietnam will be able to maintain the dynamism of development. Some speakers came to the culminating conclusion “We need a Second Doi Moi”. 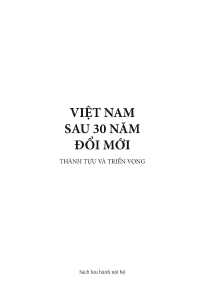 The proceedings of the conference “30 Years of Doi Moi_ Success, Lessons and Prospects” (Pdf)
Herunterladen