Synergies between Hydrogen Export and Domestic Energy Transition in Australia

'Periscope' is the Occasional Analysis Paper/Brief series of the Konrad Adenauer Foundation's Regional Programme Australia and the Pacific. Just like the real-world sighting instrument, Periscope is meant as a lens to broaden our insights - taking in views from different angles. This way, it seeks to bring together perspectives from Germany, Europe, Australia, New Zealand and the Pacific region to augment our understanding of contemporary issues and help address the pressing problems of our time. The Periscope Series covers topics from the area of foreign and security policy, cybersecurity, terrorism/counter-terrorism, energy policy, rule of law, socio-economic matters and development policy. It comprises both longer Analysis Papers– in the form of single-author (and co-authored) contributions or edited volumes with multiple authors - and shorter Analysis Briefs.
October 15, 2020 Ordering Information

Changlong Wang, Roger Dargaville and Falko Ueckerdt from the bilateral scenario working group of the Australian-German Energy Transition Hub have analysed on the basis of various scenarios the potential impact of hydrogen exports on energy systems in Australia.

This edition is published following KAS Australia's virtual energy policy seminar on The Hydrogen Economy - Prospects for a German-Australian collaboration (see here for the event report).

Changlong has just submitted his PhD thesis (on “Modelling Australia’s transition to a low carbon electricity system with optimised transmission networks and renewable energy exports”) in September 2020 at the University of Melbourne. In his PhD, Changlong developed a large-scale multi-decadal capacity expansion model that can simultaneously optimise the electricity generation, transmission, and storage systems for an orderly energy transition. The model has also been used to explore export opportunities (in terms of hydrogen, renewable electricity via HVDC cables and green steel) for Australia in a carbon-constrained world.

Changlong is a researcher at the Australian-German Energy Transition Hub and has been working in a bilateral scenario modelling group of 15 researchers to investigate the impact of large-scale hydrogen industry on the Australian energy system. Chang is also one of the two Australian experts, who represent Australia in a new IEA, Hydrogen Implement Agreement, Task 41: “Analysis and Modelling of Hydrogen Technologies”. His work involves developing knowledge of modelling Hydrogen in the value chain.

Changlong is a recipient of the Melbourne International Engagement Award, CSIRO Office of the Chief Executive postgraduate award, Australian Institute of Energy’s postgraduate award and a top-up scholarship from the National ICT Australia (now known as Data61).

Falko Ueckerdt is a senior scientist at the Potsdam Institute for Climate Impact Research (PIK) and leads the team National Energy Transitions. He leads or works in national and international research projects with researchers from all over the world, including China, USA, India, Europe and Australia. Dr Ueckerdt is part of two IEA advisory groups, on system integration of variable renewables and on projected costs of generation. He was/is a contributing author to the Special Report on Renewable Energy Sources and Climate Change Mitigation of the IPCC (2011) and the Sixth Assessment Report (current).

In the past, Falko Ueckerdt was a postdoctoral research scholar at the Hanley Sustainability Institute of the University of Dayton, Ohio (2016), worked in energy planning for the International Renewable Energy Agency (2014/2015) and in e-mobility for the Boston Consulting Group (2009). Falko Ueckerdt studied physics at the Humboldt University Berlin and did his PhD at PIK (on renewable system integration) supervised by Ottmar Edenhofer, Bob Brecha and Gunnar Luderer.

Falko Ueckerdt has a background in physics and economics and conducts research and policy advice in the field of climate change mitigation and energy system transformation, particularly on wind and solar power integration, sector coupling, electrification, hydrogen and efuels.

Dr Roger Dargaville is an expert in the field of energy and climate systems and has deep understanding of the workings of a broad range of energy technologies and the policy challenges of the transition to a low carbon energy future.  His research foci are large-scale optimised high penetration renewable electricity networks, novel energy storage technologies, and role of climate and weather extremes on the energy system.  He has extensive experience working with industry having several close partnerships with major energy and engineering companies. Roger has an international view of climate and energy issues, having worked for organisations such as the International Energy Agency, UNESCO and the American National Center for Atmospheric Research.

Roger is currently a Senior Lecturer in the Resources Engineering group in Civil Engineering at Monash and the lead of the Renewable Energy stream.  He is developing and coordinating the delivery of an undergraduate degree in renewable energy, incorporating wind, solar, hydro, geothermal, bioenergy and power system units.  He has also recently undertaken the role of Deputy Director of the Monash Energy Institute, leading the Resources theme, is the current Vice-President of the Australian Meteorological and Oceanographic Society, and is the convenor of the 2020 Asia-Pacific Solar Research Conference, being held in Melbourne (and virtually) later this year. 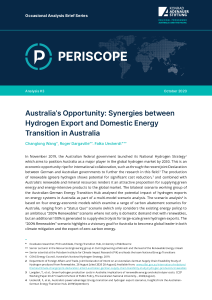