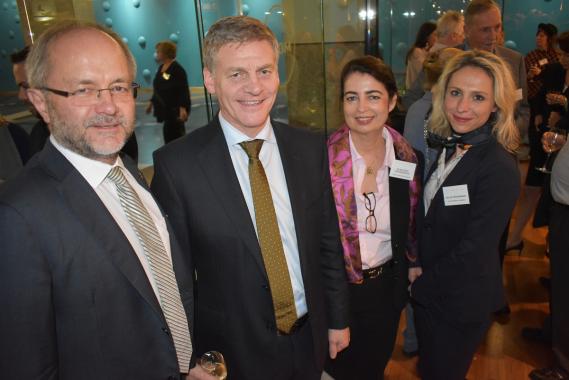 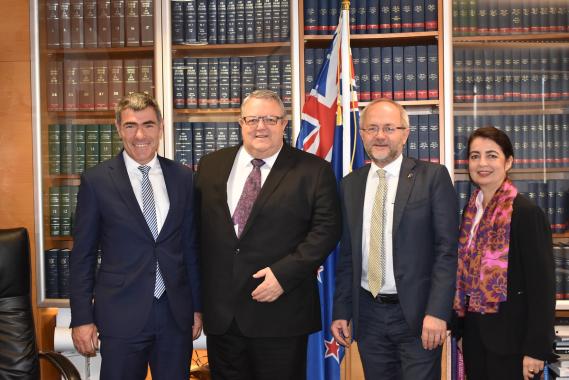 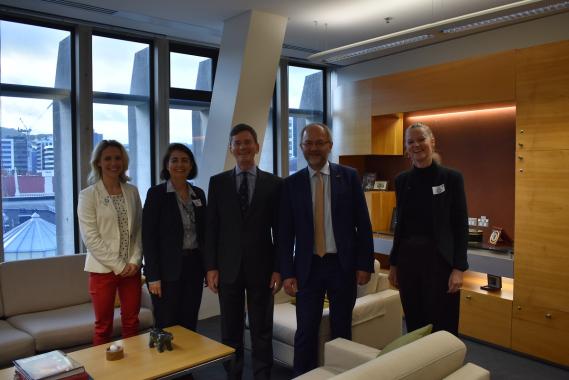 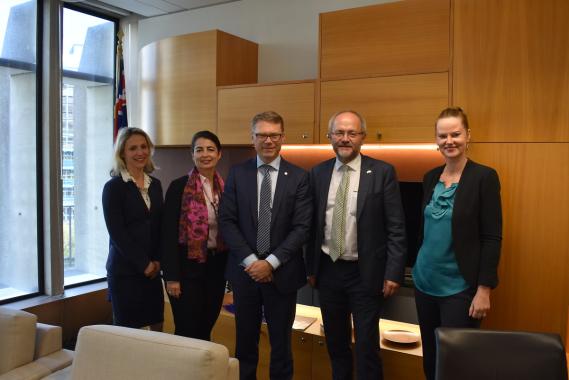 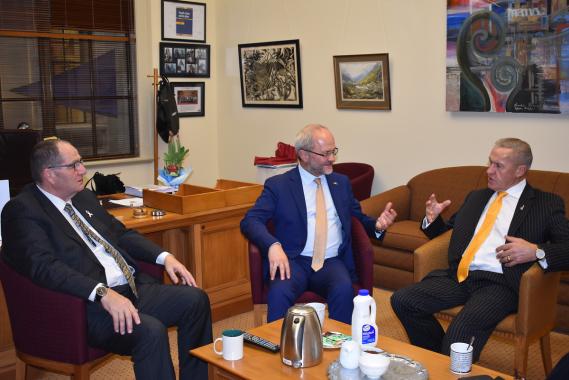 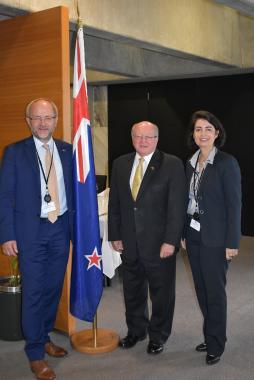 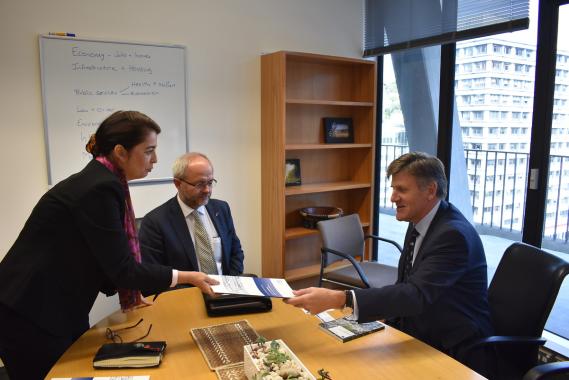 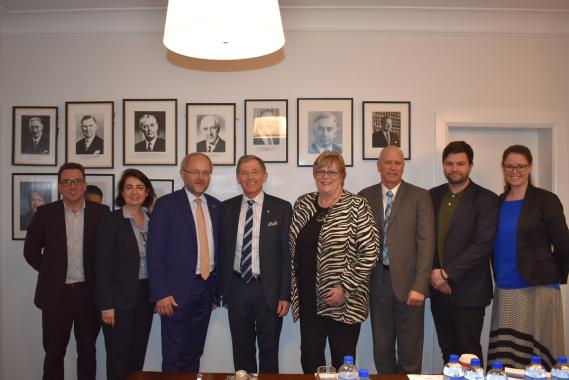 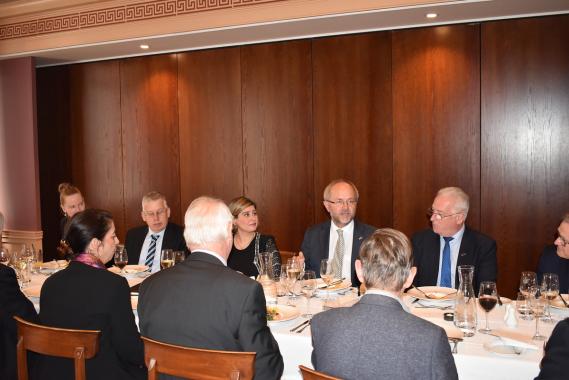 MP Volkmar Klein at an Expert Roundtable discussion at the New Zealand Institute of International Affairs in Wellington with Ms Maty Nikkhou-O'Brien (Executive Director NZIIA) and Sir Douglas Kidd (President of the NZIIA). 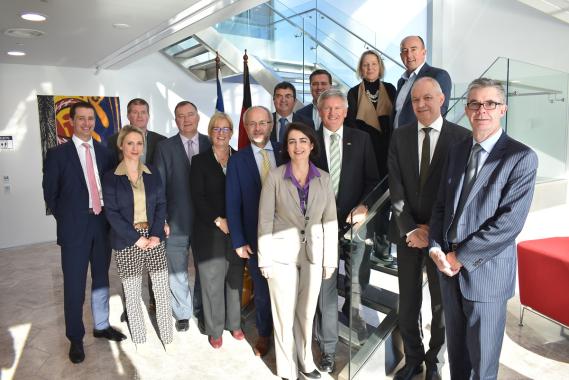 MP Volkmar Klein at the New Zealand - German Business Association in Auckland. Pictured here with Ms Monique Surges (Executive Director of the Association), CEOs and leaders of the business community.
Upon invitation of the Konrad Adenauer Foundation, MP Volkmar Klein, Chairman of the Parliamentary Friendship Group for Relations with Australia and New Zealand, visited New Zealand for a three-day parliamentary exchange and political party dialogue programme which also included roundtable discussions with leaders from the business community and foreign/security policy experts.

MP Klein visited the New Zealand Parliament and the National Party headquarters in Wellington and conducted high-level political talks that centred on the common political and economic challenges faced by both countries.

At the headquarters of the National Party, which has recently celebrated its 80th anniversary and has been New Zealand’s ruling party since 2008, MP Klein met with party representatives including the Party President Mr Peter Goodfellow and Party Secretary Mr Greg Hamilton. The purpose of the meeting was to discuss evolving challenges in the political landscape, such as the rise of populism, which is especially important during the election year (New Zealand and Germany are holding federal elections on September 23 and 24 respectively).

At the New Zealand Parliament, MP Klein engaged in exchanges with various parliamentarians, Speakers of the House and Ministers, such as the Speaker of the House, the Rt Hon. David Carter, its Deputy Speaker, the Hon. Chester Borrows, the Assistant Speaker and Chairman of the New Zealand-Germany Parliamentary Friendship group, MP Lindsay Tisch, the Foreign Minister, the Hon. Gerry Brownlee, the Attorney-General and Minister in Charge of the NZ Security Intelligence Service, the Hon. Christopher Finlayson, the Minister of Civil Defence, the Hon. Nathan Guy, and the Minister for Tertiary Education, Science and Innovation, the Hon. Paul Goldsmith, as well as Mr Wayne Eagleson, Chief of Staff to the Prime Minister.

The topics addressed in the various meetings focused on the changing global political climate, manifested in issues such as the uncertainty caused by Brexit in relation to the free movement of goods and people, the changing strategic landscape worldwide, especially also after the election of Donald Trump, as well as challenges posed by international terrorism, refugee flows and the causes of migration.

MP Volkmar Klein shared his perspective on the future trajectory of Europe and highlighted the importance of addressing the root causes of these issues rather than only trying to fix the symptoms – something which he stressed was only possible through good and durable cooperation between countries since this alone is what can create fresh enthusiasm for the idea of a united Europe.

The theme running through these thought-provoking exchanges was that in trying to tackle these global challenges both countries, irrespective of geographic distance, share a common purpose and can be seen as speaking with a common voice, in particular in the area of free trade and the values and principles that both countries are bound by.

In Auckland MP Klein attended a function where the Prime Minister, the Rt Hon. Bill English was the guest of honour. This provided the opportunity to build on a conversation that was begun when the Prime Minister visited Berlin earlier in the year.

These political talks were followed by two highly stimulating roundtable discussions at the New Zealand Institute of International Affairs (NZIIA) in Wellington, and the New Zealand-German Business Association in Auckland. At the NZIIA meeting, the issue of global leadership in a changing strategic environment was a major point of discussion, and how this could translate into advancing cooperation between Germany/Europe and New Zealand, whereas the discussion with leaders from the New Zealand business community focused on the potential for furthering the bilateral economic relations between Germany and New Zealand.

Furthermore MP Klein and the KAS delegation also met with Mr Peter Kiely, Chairman of the Pacific Cooperation Foundation, to discuss the situation in the South Pacific and explore possibilities for future KAS activities in the region.

As MP Klein summed it up poignantly, exchanges like this demonstrate the importance and potential of creating the momentum to bring this value partnership between Germany and New Zealand to a higher level.