EU-Commissioner Avramopoulos: Up to 100.000 migrants and refugees will enter Greece in March - Foundation Office Greece and Cyprus

EU-Commissioner Avramopoulos: Up to 100.000 migrants and refugees will enter Greece in March

EU-Commissioner Avramopoulos was the keynote speaker at a conference organized by Konrad-Adenauer-Stiftung and the Konstantinos Karamanlis Institute for Democracy in Athens 48 hours before the EU-Turkey Summit
March 7, 2016 Ordering Information 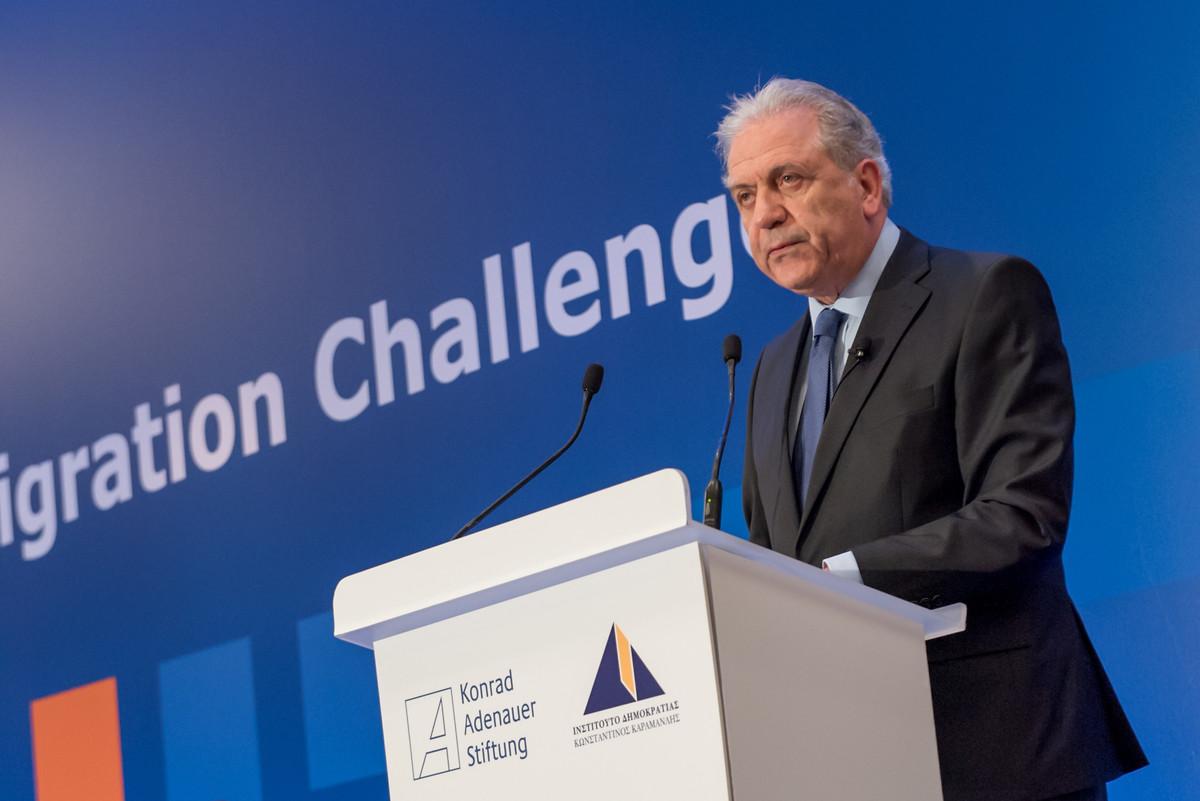 KAS
Shortly before the EU-Turkey Summit, Dimitris Avramopoulos, Commissioner for Migration, Home Affairs and Citizenship, was a guest of KAS Greece. 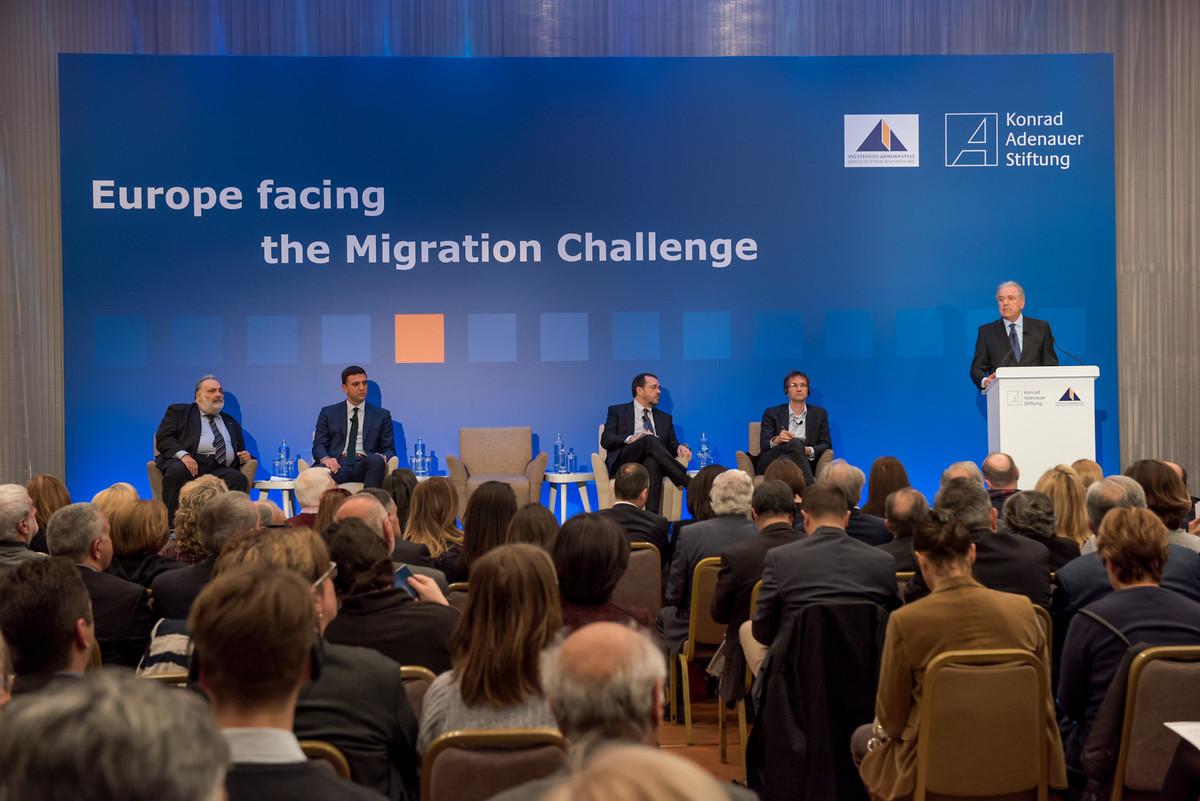 KAS
A panel of high level experts discussed the challenges of the current migration crisis with the Commissioner. 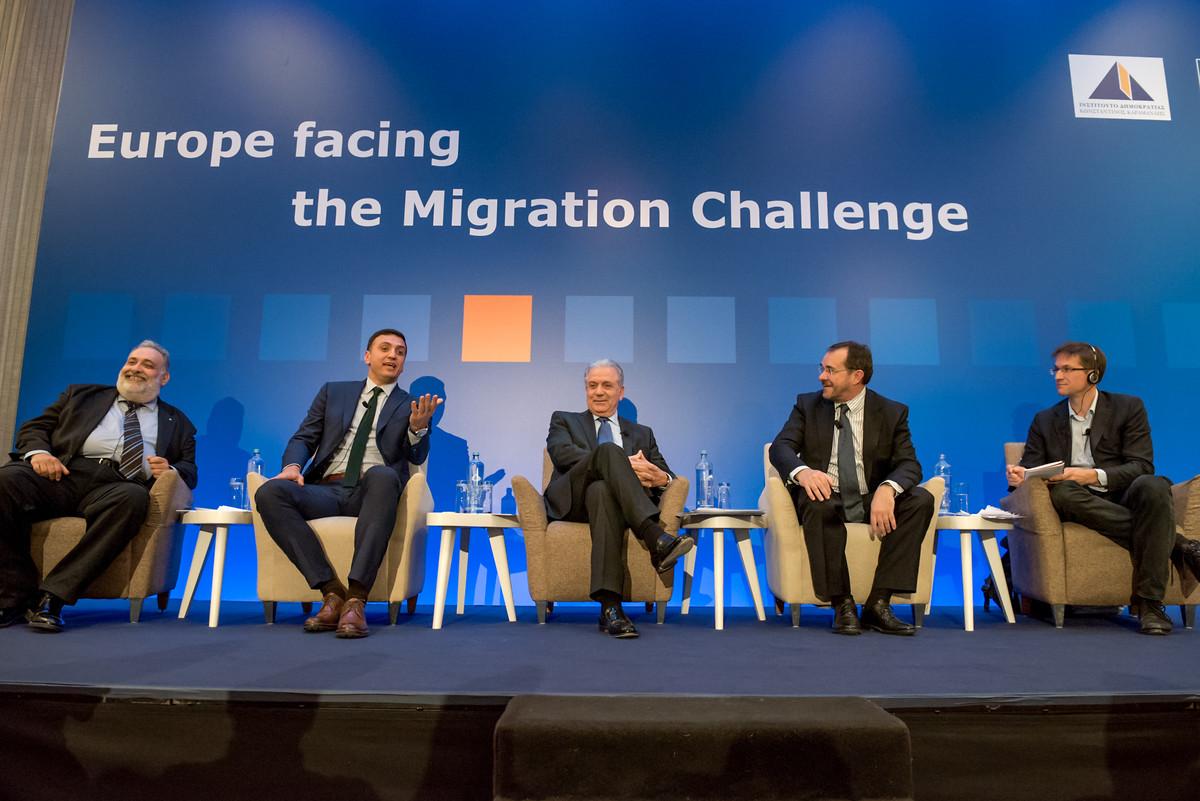 KAS
The panelists were Vassilis Kikilias, parliamentary coordinator for migration policy of Nea Dimokratia, Gerald Knaus of the European Stability Initiative and Daniel Esdras, head of the Greece office of IOM. 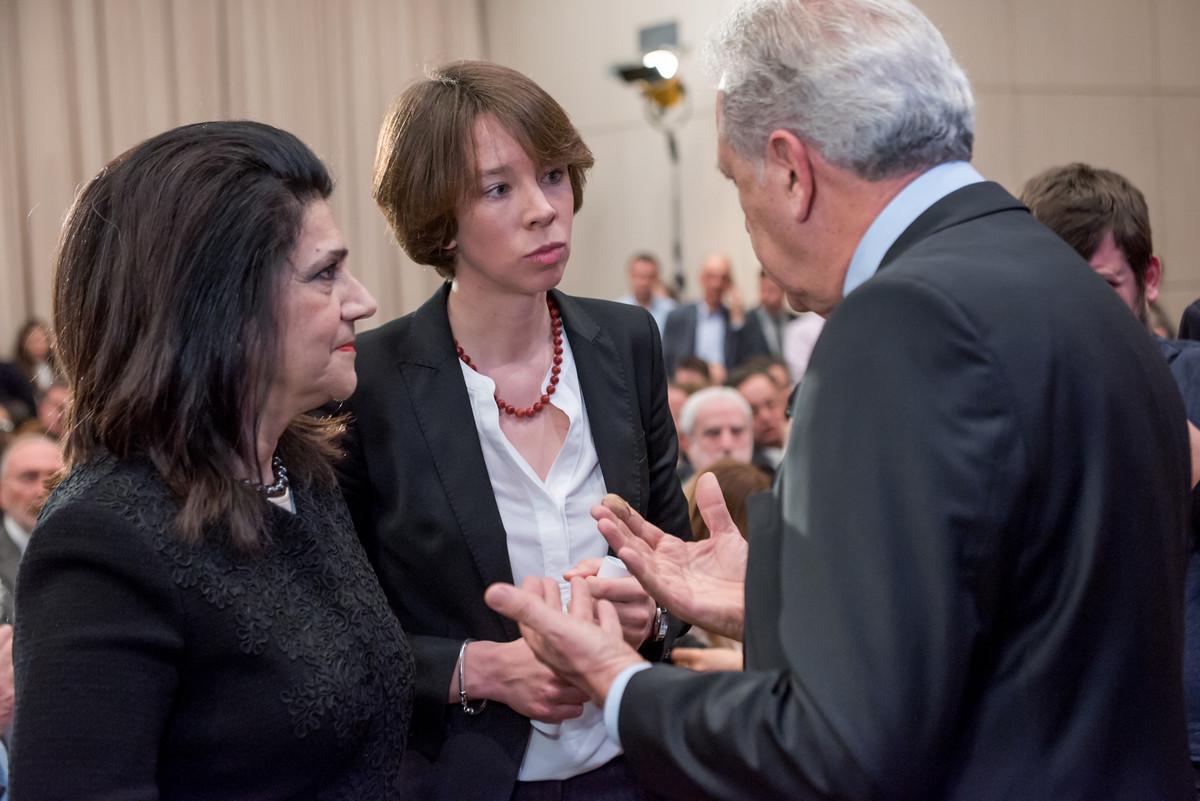 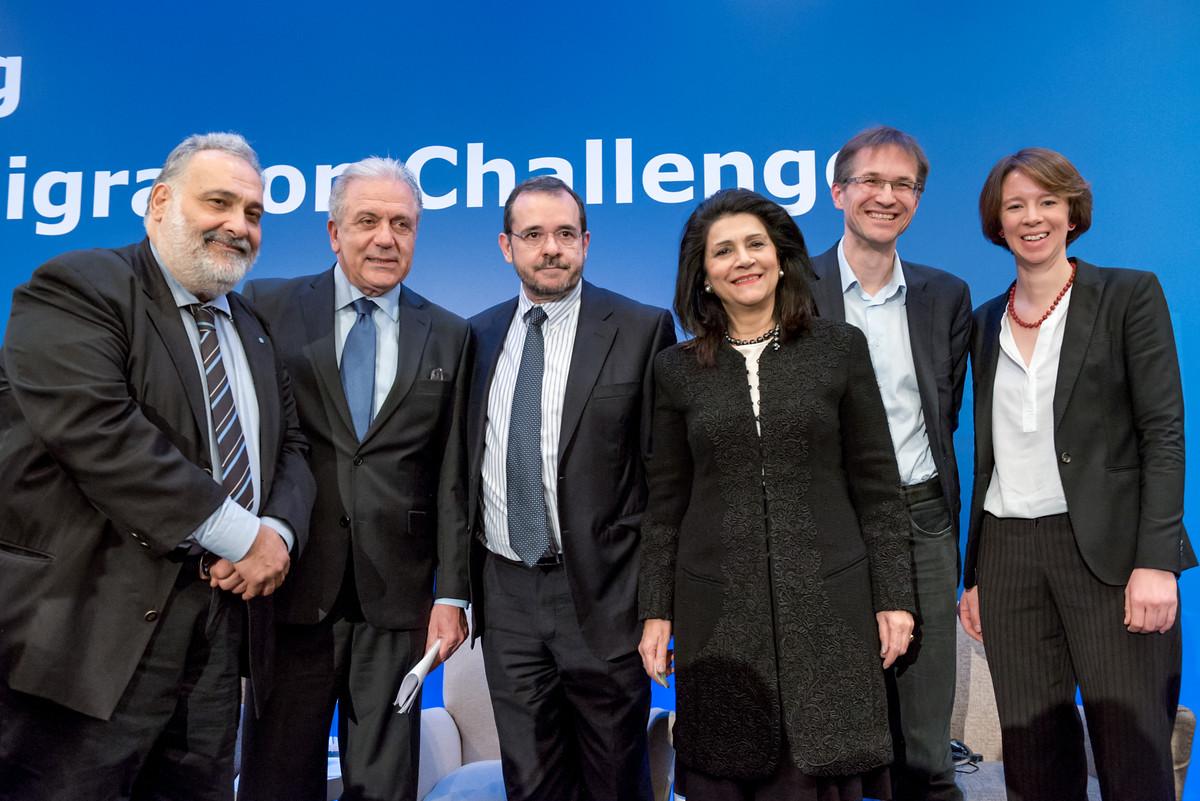 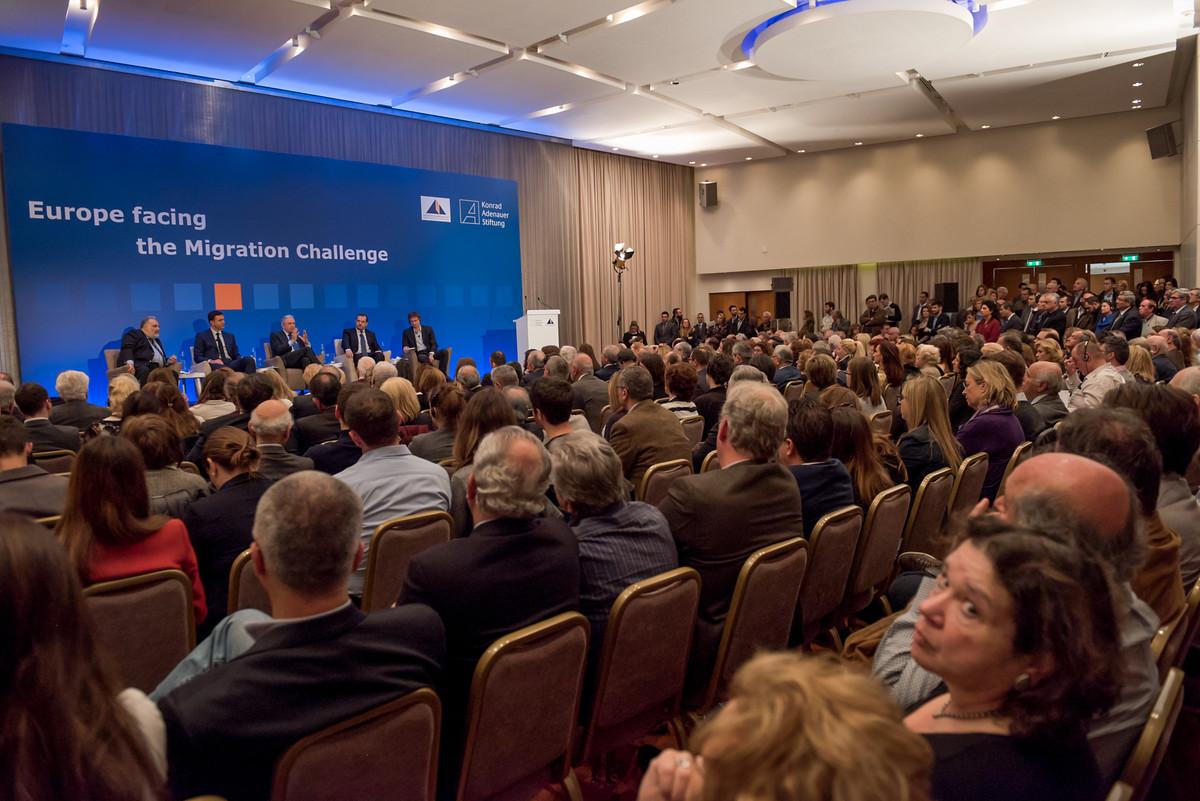 “Greece is not alone; Europe is on its side. No member-state will leave the Schengen Area” said the EU Commissioner for Migration, Home Affairs and Citizenship Dimitris Avramopoulos on Saturday at an event organized by KAS Greece. More than 600 guests, among them various Greek politicians, attended the panel discussion in Athens which took place only 2 days before today’s EU Summit where crucial decision are expected to be taken.

EU Commissioner Avramopoulos stated that he will insist on finding “legal ways of migrating”, and that the priority is to control the waves of migration and create a framework of cooperation between member states.

Vassilis Kikilias, Member of Parliament and New Democracy Coordinator for Migration Policy, blamed the current Greek government that it is “pulling” migrants after abandoning the “detention” policy. He claims that the situation today - migrants being stranded in various public places, like the borders to FYROM – is less humane than detention.

Gerald Knaus, Chairman of the European Stability Initiative, doubted the effectiveness of the EU relocation policy which has produced poor results so far. For Knaus, resettlement would be more efficient in terms of security, controlling the migration flows and protecting migrants from trafficking and dangerous routes. This will only work, if readmission of migrants from Greece to Turkey brought forward.

Daniel Esdras, Head of the IOM office in Greece, stressed that relocation should be activated with more emphasis to ensure legal and controlled transfer of migrant families from Greece to other European countries.

All experts agreed on one thing - that the cooperation with Turkey is of highest importance, although many remain sceptical at some aspects of the cooperation. All had more than high expectations from today's EU Summit.