Τrends in the European Economy and the prospects for Greece

by Martha Kontodaimon
On Monday, February 3, the experts discussion co - organized from Konrad Adenauer Foundation Greece and Cyprus and the Foundation for Economic and Industrial Research titled « Τrends in the European Economy and the prospects for Greece» took place in Athens.
February 4, 2020 Ordering Information 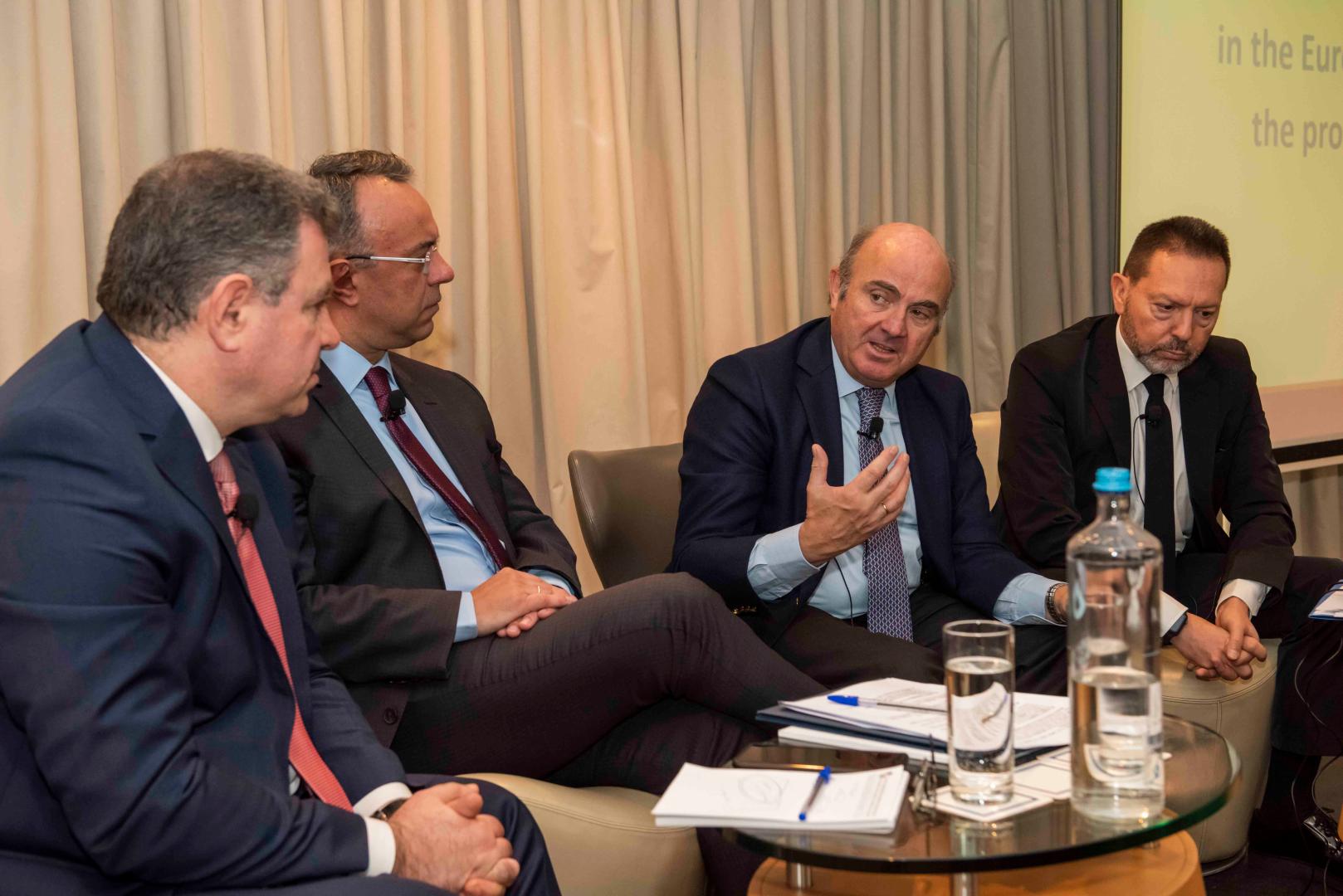 Panel | Τrends in the European Economy and the prospects for Greece 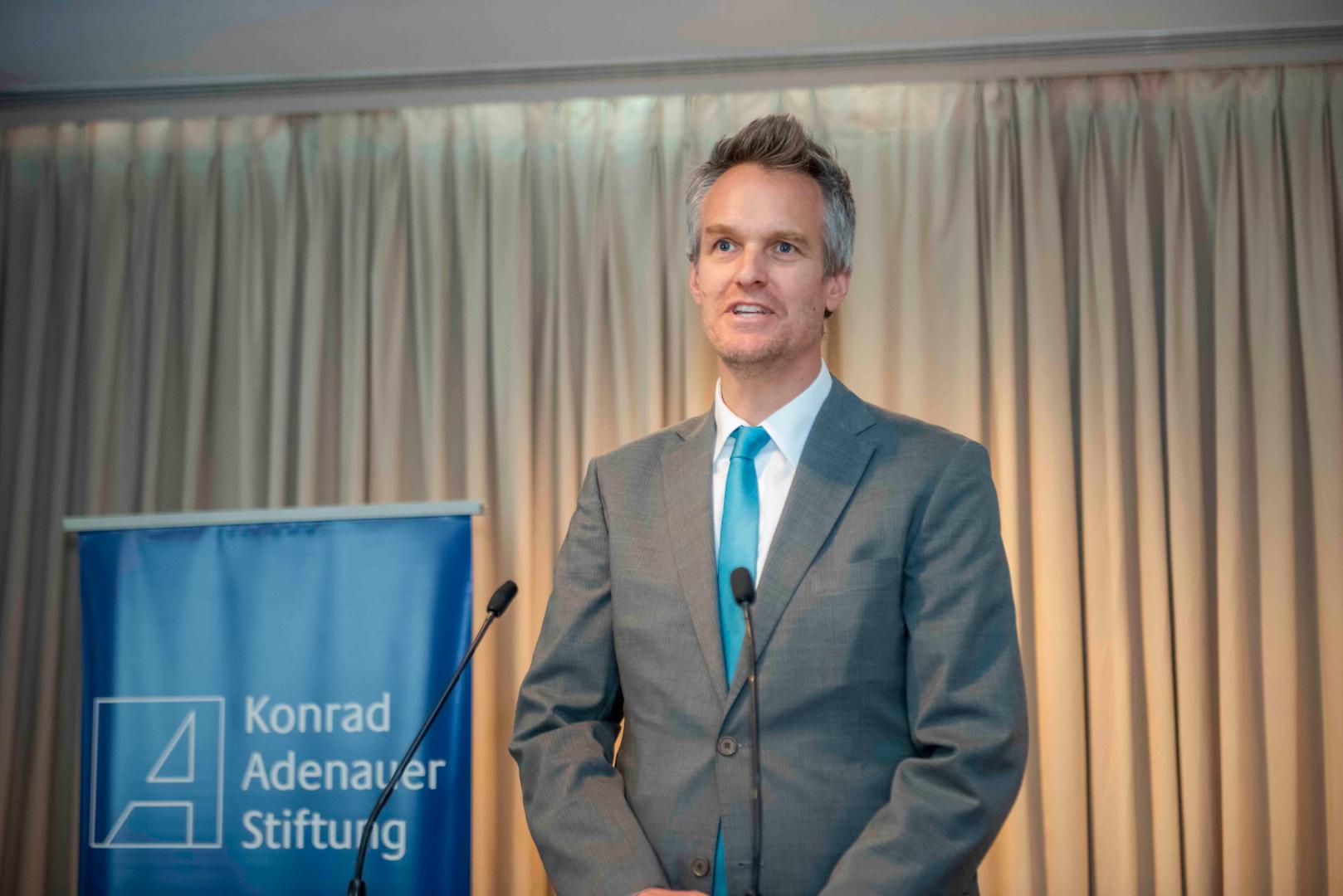 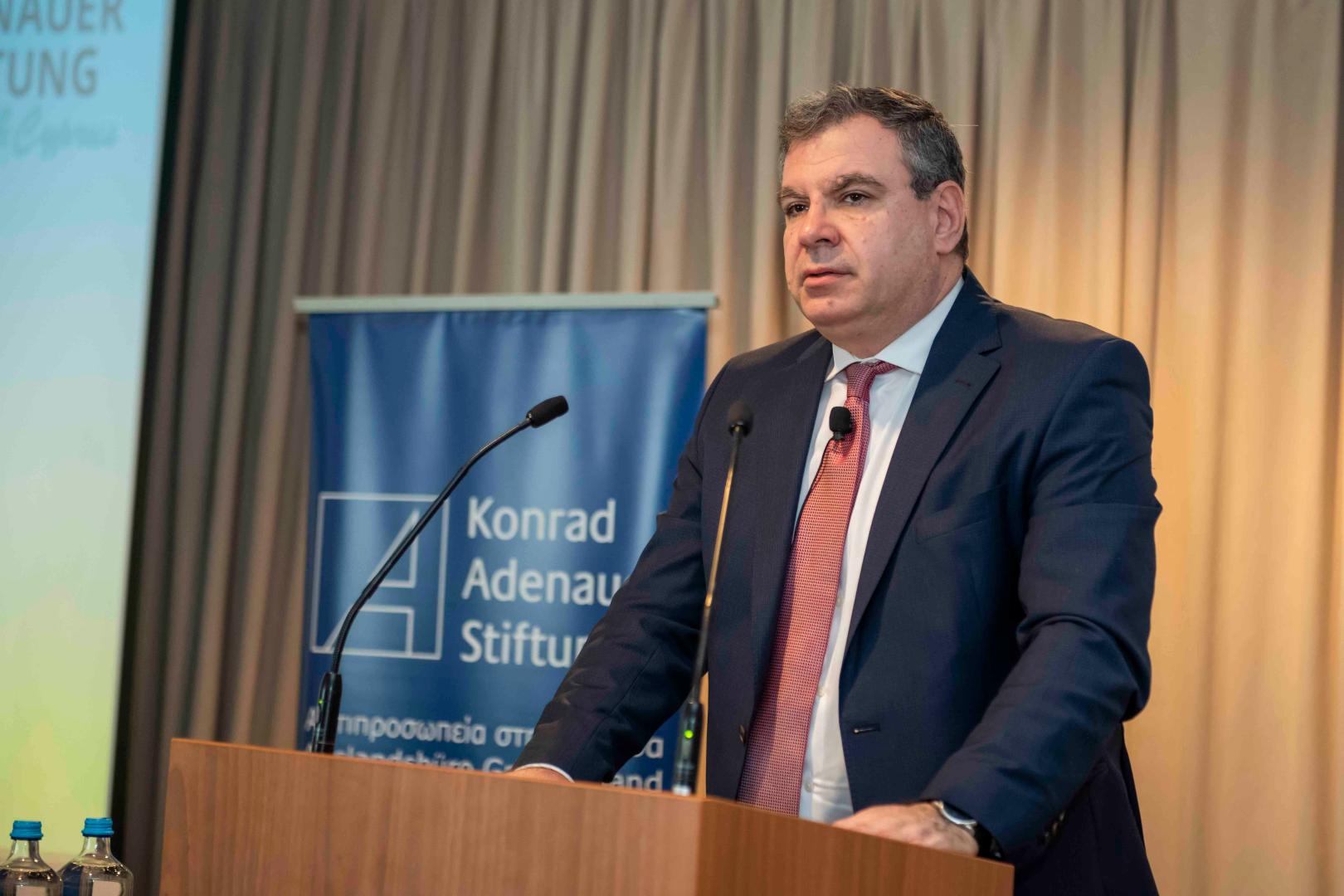 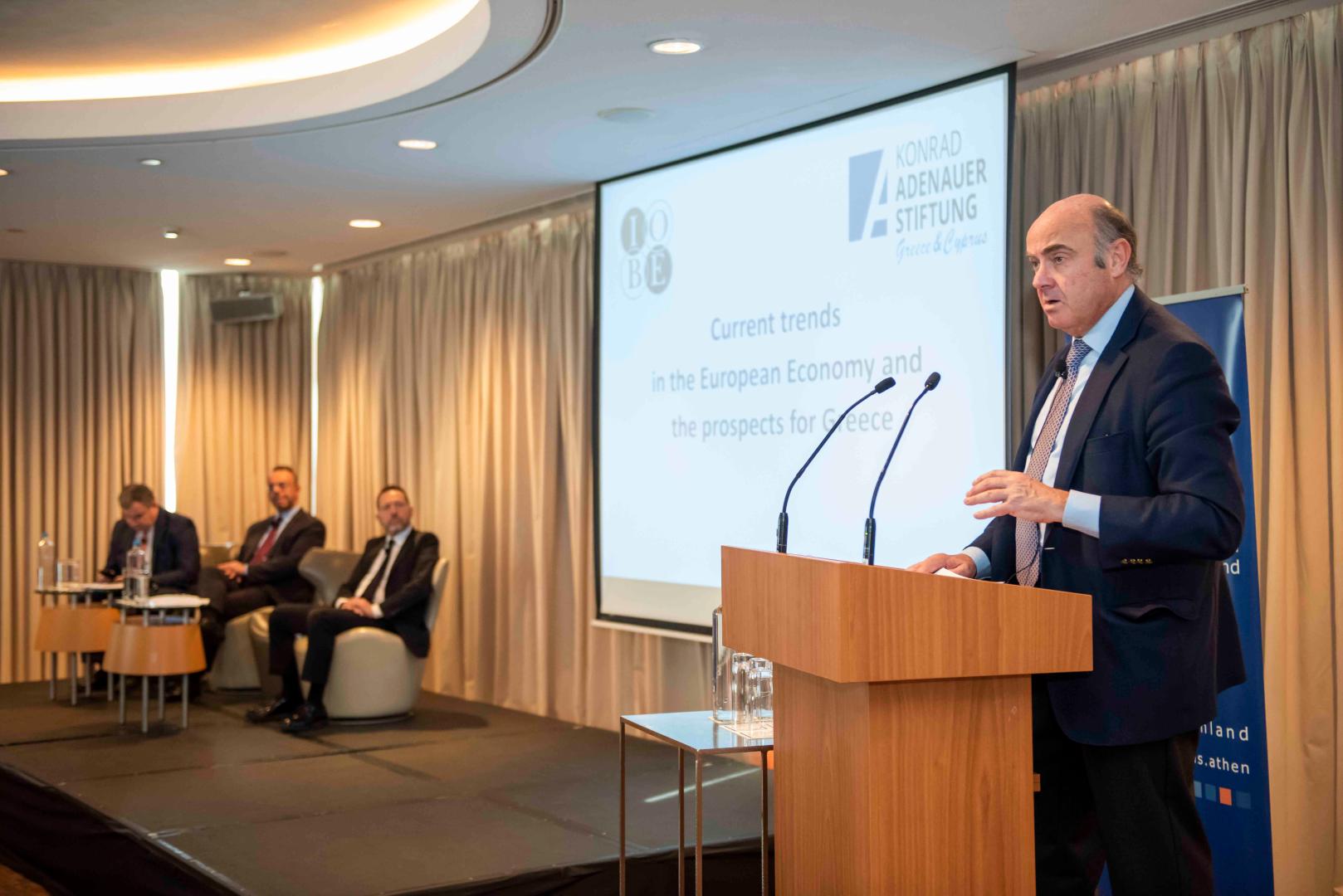 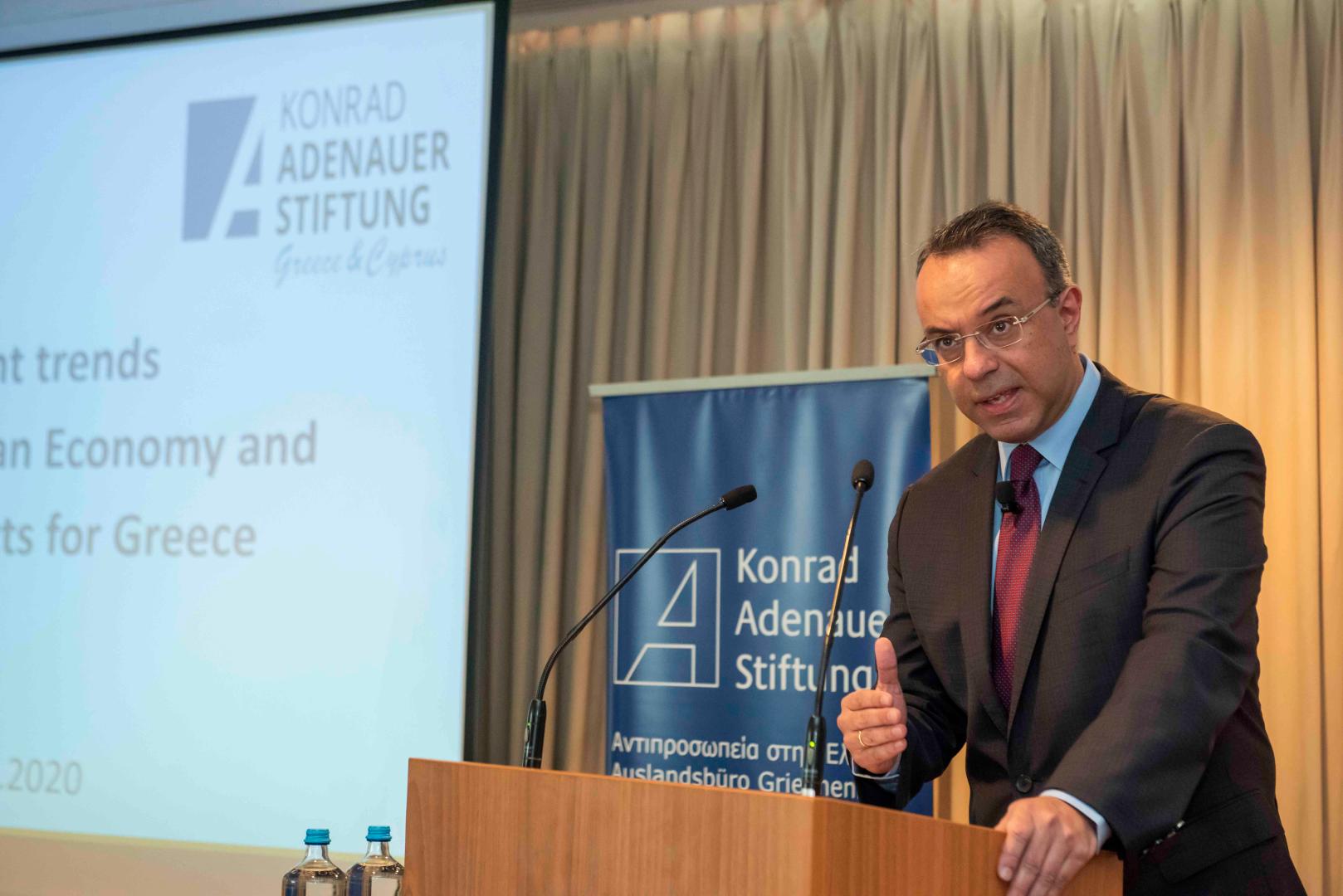 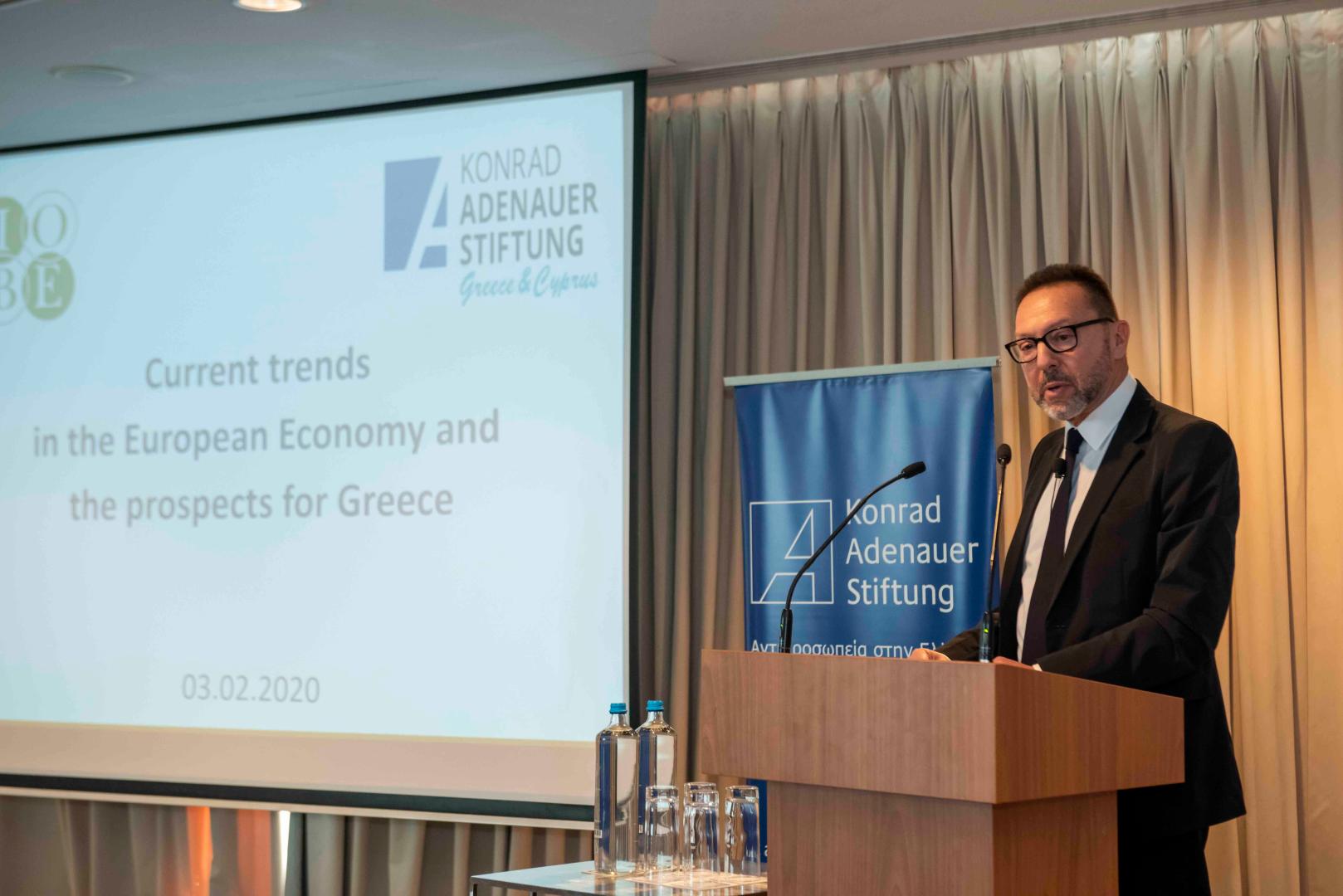 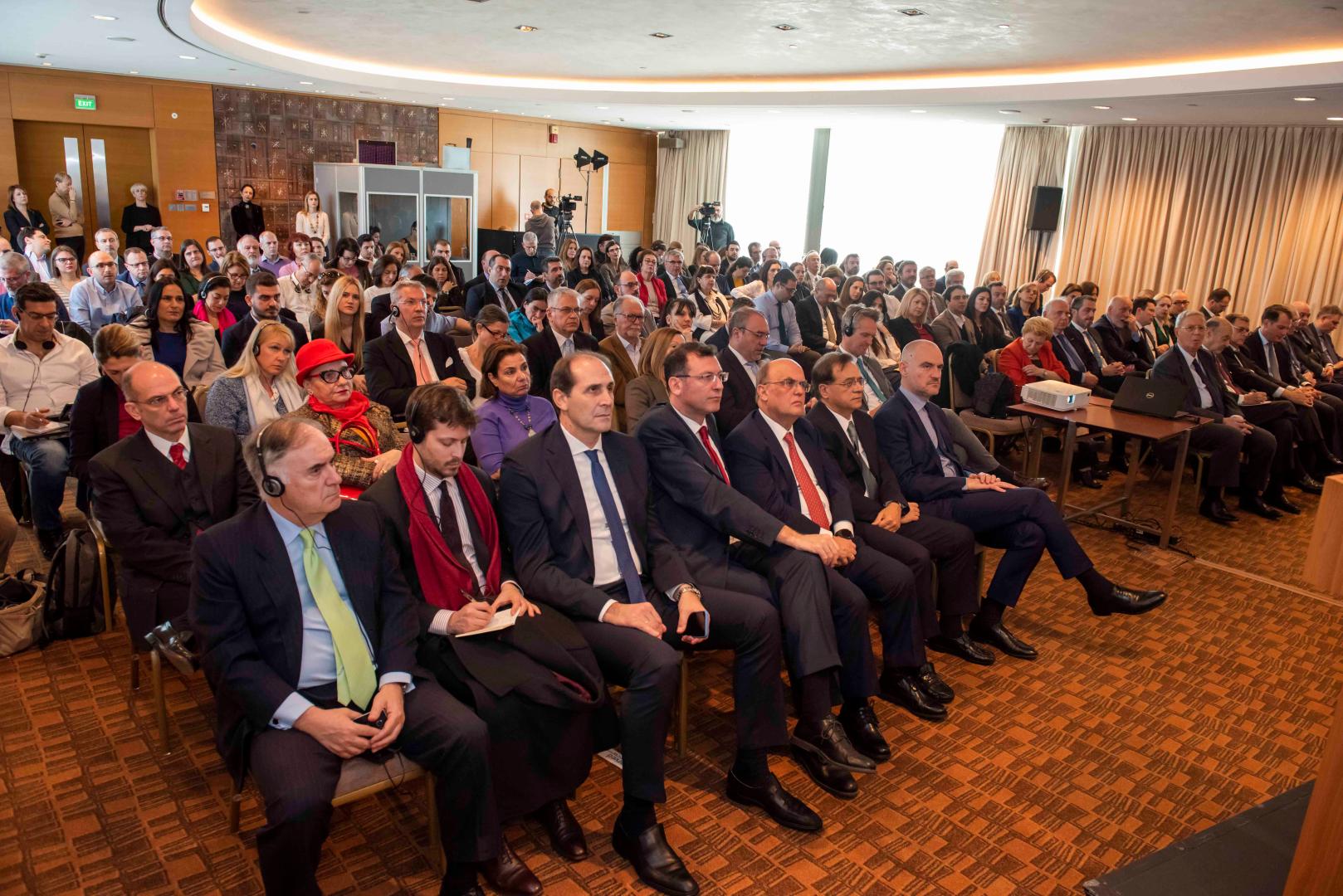 The discussion was followed experts and multipliers of the field. 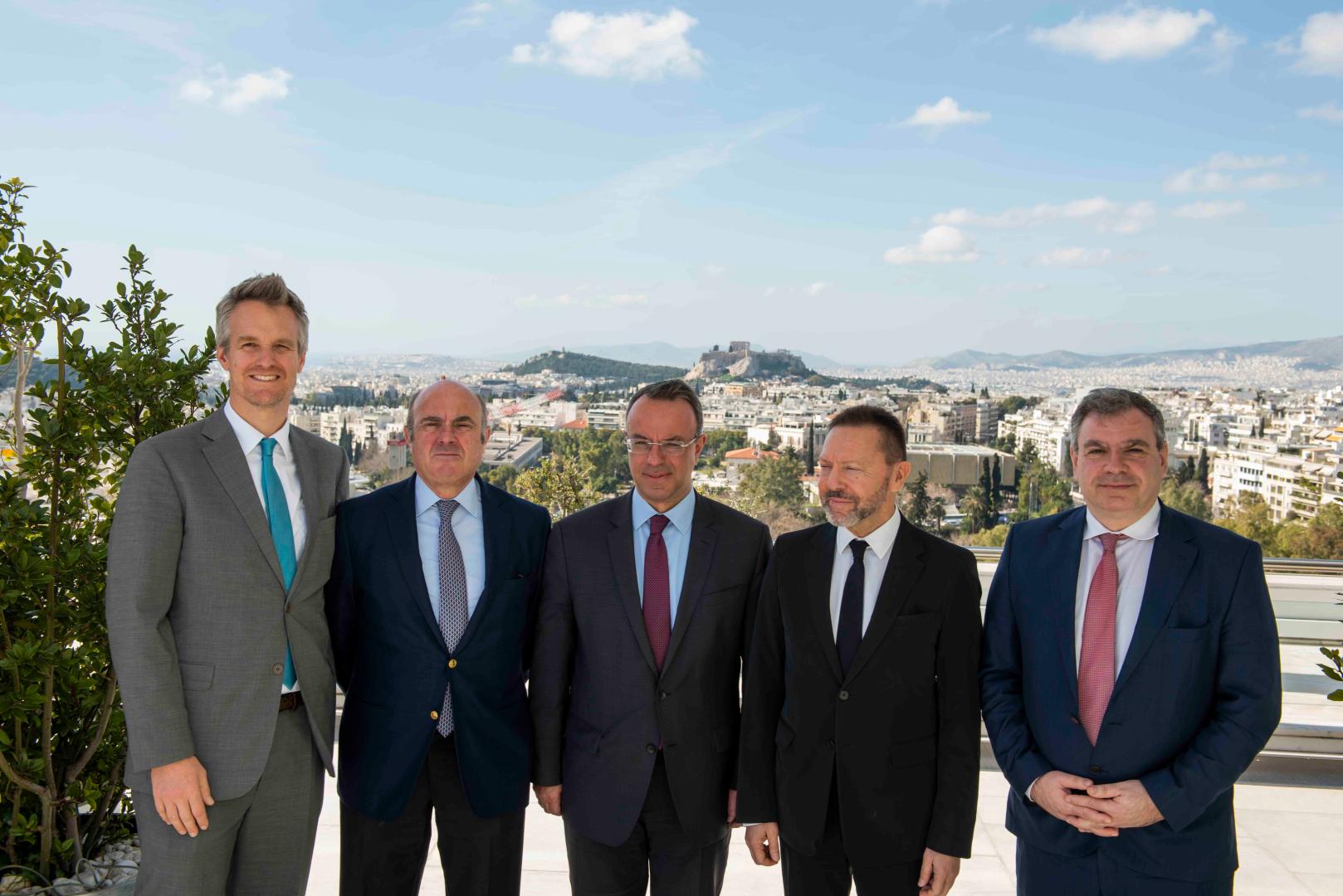 In the event spoke the Vice-President of the European Central Bank, Mr. Luis de Guindos, the Minister of Finance of the Hellenic Republic, Mr. Christos Staikouras, and the Governor of the Bank of Greece, Mr. Yannis Stournaras.

The Vice-President of the European Central Bank, Mr. Luis de Guindos, noted in his speech that the global economic growth remained sluggish in 2019, with signs of improvement in trade, following the recent US-China agreement (Phase1). However, in recent weeks, the outbreak of coronavirus and concerns about the impact on the Chinese economy coupled with the UK's exit from the EU are creating uncertainty. Concerning the eurozone economy, the ECB Vice President noted the signs of stabilization and slow growth as encouraging, emphasizing that it reflects the continuing weakness of international trade. As he pointed out, the risks surrounding the eurozone economy remain, however, are less pronounced.

Concerning Greece, Mr Luis de Guindos underlined the acceleration of the growth rate of the Greek economy and the progress made in implementing the commitments made by the Greek authorities. The Vice President of ECB noted the crucial role of bank lending in the efficient operation of the economy, noting that it remains weak in Greece. He described the high level of non-performing loans as a major weakness of the Greek banks, despite the progress made, stressing out that their further reduction should be a key objective in order for the banks to finally fulfill their lending role. Finally, Mr. Luis de Guindos emphasized the importance of restoring the payment culture and the low efficiency of the judicial system in Greece, which exacerbated the problem of dealing with non-performing loans. He finally stressed out that reforms which would ensure the efficiency of the judiciary are of the utmost importance in order to accelerate the clearing of non-performing loans from Greek banks's balance sheets.

The Minister of Finance, Mr. Christos Staikouras, mentioned in his speech the multidimensional, economic, social, institutional and political crisis that Europe has been facing recently. He noted the new challenges on the horizon, such as geopolitical tensions, the effects of Brexit, the risk of sustained anemic growth and low inflation, the role, direction and combination of fiscal and monetary policies, adapting to the new digital age, the demographic and climate changes, which call for a collective response from a more resilient, competitive and effective Europe with enhanced solidarity. The Minister of Finance set some basic requirements in this regard:

1st. Strengthening the role of fiscal policy in the European development path. Fiscal policy which can and should support the ECB's existing monetary policy in order to achieve both fiscal discipline and high and sustained growth rates.

2nd. Completion of Economic and Monetary Union. A dynamic, complete and resilient Union is the best instrument for enhancing financial stability and real convergence in Europe and, therefore, for strengthening the international role of the euro.

3rd. The completion of the banking union. It lacks its third pillar, which is extremely important, namely the creation and operation of a fully liquidated European Deposit Guarantee Agency.

4th. The promotion of an integrated capital markets union, with the aim of enhancing liquidity and introducing a secure European Portfolio.

5th. The fight against money laundering, with properly designed responsibilities and better coordination.

6th. Adapting the European Economic Model to the Requirements of the Digital Age.

7th. The transition to an environmentally friendly and climate-neutral continent, while ensuring that everyone can benefit from the opportunities that will arise, as well as ensuring that regions affected by the transition are protected. Finally, Finance Minister Christos Staikouras stressed that "our country supports the spirit of the Green Agreement".

The Governor of the Bank of Greece, Mr. Yiannis Stournaras, in his speech referred to the global economic developments and the euro area. He stressed that the monetary policy of the euro area would remain facilitating until inflation approaches the relevant target, while also supporting the economic activity. He also stressed out that the fiscal and structural policy should play a more active role in stabilizing the euro area economy and argued in favor of enhansing the EMU.

Regarding the Greek economy, he underlined the significant progress the country has made and that the Greek economy is now recovering. For the domestic financial system, he cited positive developments with improved capital adequacy, pre-projected profitability and liquidity, but stressed that the high volume of non-performing loans remains the major problem.

The Governor of the Bank of Greece noted that four Greek systemic banks have agreed with the European Central Bank and the Single Supervisory Mechanism (SSM) ambitious targets for reducing the NPLs. "On the basis of these targets, the percentage of PSUs is expected to drop below 20% by the end of 2021. However, it should be noted that, even if these targets are achieved, the percentage of PSUs of Greek banks will be five times that of existing EU average ".

"In this context, it is important to implement radical and systemic solutions that will complement the efforts of the banks themselves to rapidly improve the quality of their assets."

Mr Stournaras stressed that the "Heracles" plan, which is based on the APS through a state guarantee, is an important step in tackling the problem. However, given the magnitude of this problem, this figure is expected, at a later stage, and after Hercules begins to produce results, to be supplemented by others, such as the one proposed by the Bank of Greece in the recent past.

In the ensuing discussion, co-ordinated by IOBE's Director, Professor Nikos Vettas, were addressed issues such as the medium-term constraints and risks of today's loose monetary policy, the risks of zero-interest rates and zero-interest rate policies, the long-term impacts - risks to growth and the world economy, the situation of European banks, the challenges of the Italian economy, the situation in Greece and how economic growth can be achieved as well as how the country could attract investments.

Τrends in the European Economy and the prospects for Greece