by Romina Liesel Elbracht
The 3rd India Forum on China, titled “China and Asia’s Changing Geopolitics” organized by the Institute of Chinese Studies and the KAS India Office with the support of Goa University, took place from 5th until 7th of December 2019. As it was the case in the past two editions, several distinguished panelists, experts and strategists from India and abroad discussed China’s role in the region and how this has led to a geopolitical change in Asia. China’s rise and its implications for Asia and the world were further discussed as an ever-present issue in the international relations discourse.
December 18, 2019 Ordering Information 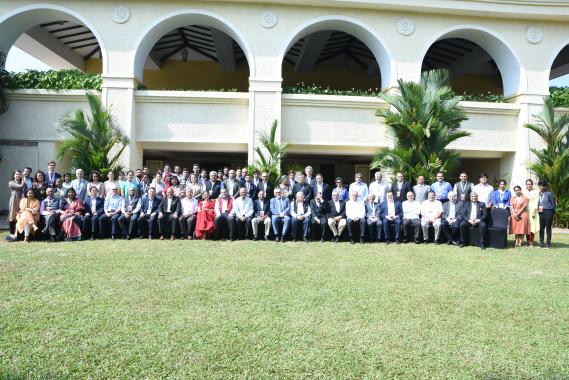 Group picture of the participants of the event 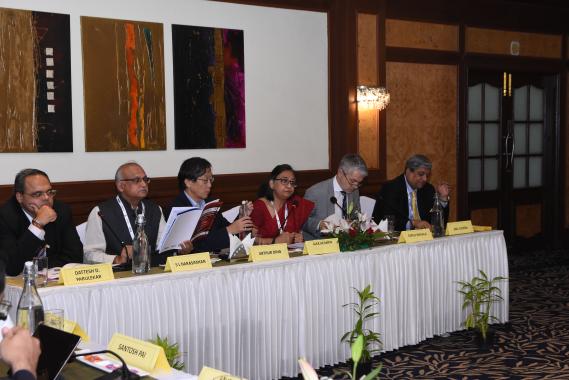 One of the many panels of the event 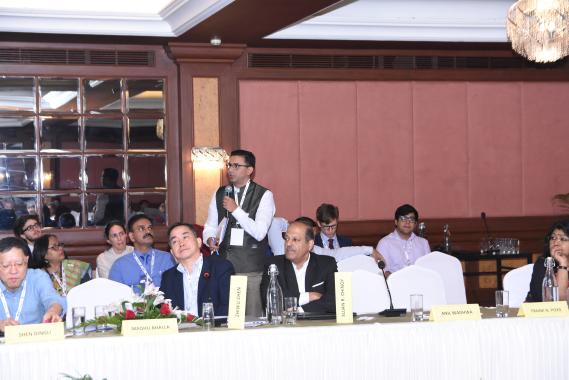 The audience also took part in the lively discussion

With this platform an important forum has been established to provide experts with the opportunity to debate one of the most relevant issues of our time. While the previous editions focused in 2017 on ‘China’s Quest for Global and Regional Leadership’ and in 2018 on ‘Changing Drivers of China’s Economy”, topics that were discussed this year during the conference were, among others, the Chinese Belt and Road Initiative and its implications for Asia, recent developments in the Indo-Pacific, the EU’s rising ambitions in the region as well as the US-China relations.

Speakers of the Inaugural session addressed the international audience and pointed out the presence of China in all the spheres of the contemporary global arena becoming the most inescapable fact of today and Xi Jinping’s elevation from a compromised Chinese candidate in 2007 to an uncompromising leader in 2019. In this regard, Xi Jinping was described as representing continuity through disruption in the context of Chinese geopolitics.

“Security and prosperity of the EU is linked to the Indo-Pacific.”

The first session dealt with scope, power shifts and contestations within the Indo-Pacific region. The status of the Quad, China-Russia relations and the EU’s connectivity strategy were amongst the topics discussed. One of the main arguments revolved around the notion that the Indo-Pacific should not be merely seen as territorial domain but as interconnected space. Furthermore, questions about what the future would hold for the Quad and related to the solidity of China-Russia relations were debated upon. Regarding the European Union, it was made clear that its ambitions within the Indo-Pacific were increasingly going hand in hand with the comment by new EU Commission’s President Ursula von der Leyen stating that the EU had learned to speak the language of power. In Germany, India’s greatest trade partner in Europe, the Indo-Pacific had at least made its way onto the German political agenda.

“For the future, no one expects China or its BRI projects to collapse.”

During session two, nature, directions and implications of the Belt and Road Initiative for Asia were debated with the discussion revolving around the model of funding of the BRI, Chinese maritime presence as well as Chinese access to natural resources in the ‘client’ countries. The BRI was described as financial institution of the Chinese whose business model was burdening the host countries with project-related debts. The future of the BRI could either encompass Chinese banks agreeing to coalitions with host countries or the second option Beijing continuing to act self-centric by bypassing international norms etc. What is more, China would aim at establishing its maritime presence in the region while improving its access to natural resources.

“China is striving for regional and global hegemony through becoming a great maritime power.”

During the last session of the first conference day titled ‘Assessing China’s Force Projection Capabilities in Asia and Beyond’, the eminent international speakers were able to shed light on a host of topics of strategic relevance ranging from China’s proactive military strategy to the reorganization of the Chinese defence forces in the maritime domain eventually aiming at controlling the trade routes in the region. China’s ambition for regional and global hegemony was discussed as well as its strategic approach to protect its ambitions in the near and distant seas. In this regard, the point was raised that even in past times, empires which had controlled the seas had lasted much longer - a fact which China would be currently striving for. Another panelist contested the notion of China being a rising power. In his opinion, it was already an ascended power and still the elephant in the room which at the same time remained important for India on many levels.

“The free and open Indo-Pacific Strategy (FOIP) of the US is one of engagements to provide continuous liberal access.“

The first discussion on the second conference day revolved around FOIP being a long-term US commitment, India not benefiting much from the China-US trade war and Germany urging Europe to respond to China with a united European voice. The panelists discussed that the US-China trade war and rivalry was there to stay. Moreover, India buying less oil from Iran after the US sanctions imposed on Iran led to the strengthening of ties between Iran, China and eventually Pakistan. In this context, implications for India are yet to be worked out. One speaker addressed FOIP as demonstration of the US to network with like-minded partners. In this regard, ASEAN states would need to uphold its independence as ASEAN would need to maintain ties with both the US and China.

“The Trump factor improved China-Russia bilateral ties in the military and energy domains.”

This next session on a ‘Changing Economic Landscape of Asia’ was marked by speakers from India, the Netherlands, Hong Kong and Russia discussing highly relevant topics ranging from Europe’s willingness to become a global player to the Huawei debate and Russia’s stance on the BRI. In this context, Europe was presented with having two possible solutions to choose from, 1) to act as a union, consisting of a collection of states or 2) taking responsibility as a genuine global player. At the same time, one speaker elaborated on the current window of opportunity resulting from China’s rise which the EU could use to strengthen its stance within current world affairs. The Huawei debate led to Europe discussing the political influence of China in Europe which was not discussed in a similar scope earlier on the continent. Europe would now be in the position to demonstrate that it wants China to act transparently and thus becoming part of a global open economy. When it came to Russia, one panelist described that the Trump factor had improved China-Russia relations in the military and energy domains. He argued further that Russia was not wanting to become part of the BRI and rather was looking for a third way beyond the US or Chinese way in the context of a greater Eurasian concept. What Russia and China would have in common was the perception that stability was a higher good than democracy while Russia still did not have enough leverage to become a relevant player in the Chinese gas market.

“China will only continue as powerful if it can continue to tell a powerful story.”

The next session during the 3rd Forum on China dealing with ‘Crafting the China Story: Beijing’s Cultural Diplomacy and Sharp Power’ shed light on Beijing’s impact beyond its borders ranging from the sphere of media to economic and political domains leading to Europe feeling the need to improve its screening of Chinese investments within the EU. The economic influence was discussed in particular given the fact that China remains the EU’s second biggest trade partner. One response to the initial question ‘Is China a challenger or no?’ was that India needs to clearly define its position towards China. Further, the discussion revolved around the importance of military deterrence, the indigenization of Indian armed forces, latest technological advancements, among others, in order for India to counterbalance China successfully on a mid and long term basis

After a couple of intense days of discussing China and Asia’s Geopolitics, Dr. Garima Mohan, Fellow at German Marshall Fund, emphasized different points during her summing up in  the valedictory session: an ascendent China, the question whether the Chinese system will survive, a contradictory picture of the current Chinese economy as well as the EU aiming at becoming an actor in the Indo-Pacific were all focussed upon. Ambassador Shivshankar Menon, former National Security Advisor and Foreign Secretary of India, added that China may be powerful but at the same time highly dependent on other states to back its strategies. From a military standpoint, he added that the world is still a unipolar one revolving around the US. He concluded by stating that the existence of multiple orders is a current fact and rather than the speculating about which order will prevail, it would be crucial to do whatever is realistic to maintain lasting peace. The organizing institutions once again thanked all participants for their valuable contributions on a topic that continues to be of ever-growing importance for Asia and the world.