The Minerva Center for Human Rights at the Hebrew University of Jerusalem in cooperation with the Konrad-Adenauer-Stiftung and the Delegation of the International Committee of the Red Cross (ICRC) in Israel and the Occupied Territories held an international conference examining the normative impact of new military technologies on core doctrines and principles of international humanitarian law (IHL).

This conference was the 6th in the series of annual international conferences on IHL, which took place at the Hebrew University of Jerusalem.

Recent technological developments are changing the face and location of the battlefield in the 21st century, transforming the definition of combatants and introducing difficult new legal and practical challenges: drones, operated by intelligence officers sitting in front of computer screens, are used instead of manned aircrafts; robots and robotic devices are replacing foot soldiers and vehicles; computer networks are used for cyber attacks instead of conventional weapons; and satellites are providing images far more detailed than human spies and reconnaissance units have ever offered.

The conference looked at the main challenges presented by technological developments – e.g., physical removal of military actors from the battlefield and the risks associated with it, the erosion of the boundaries between civilian and military infrastructures, the substitution of on-the-spot discretion with pre-programmed reactions, and the increased transparency of some battlefield activities – to the continued application of the traditional concepts of the laws of war, and speakers examined whether the basic principles of international humanitarian law – military necessity, distinction and proportionality – are elastic enough to accommodate 21st-century armed conflicts.

These developments, however, have not been met so far with formal amendments of the treaties comprising laws of war and in their mechanisms of enforcement. Consequently, contemporary armed conflicts are still regulated by a body of law created by and large in the second half of the 19th century and the first half of the 20th century – despite the radical transformation that the hostilities themselves and their technological environment have undergone.

IHL is very much a creature of the 19th and 20th centuries. Several of IHL's core principles – military necessity, distinction and humanity (the avoidance of unnecessary suffering and superfluous injury) – first appeared almost 150 years ago in legal texts such as the 1868 St. Petersburg Declaration and the 1863 Lieber Code. In addition, some of IHL's key concepts, such as the definition of armed conflict, belligerents/combatants, the battlefield, etc., and the legal doctrines that regulated them, were developed through the Hague and Geneva Conventions of 1864, 1899, 1907, 1929 and 1949. Changes in the political and military landscape have led to a number of normative changes and clarifications, most notably the codification of the 1977 Additional Protocols (parts of which reflect customary international law).

Against this backdrop, recent technological developments appear to have far-reaching effects on the character and location of the 21st century battlefield, and may also be complicating the definition of combatants and leading to difficult new legal and practical challenges. These new military technologies may affect or already affect the manner in which obligations under IHL can be carried out. For instance, the wide availability of lasers and other precision-guided weapons can modify the method of execution of the parties' obligations pursuant to the principles of distinction and proportionality. The prevalence of recording and monitoring devices, as well as advances in genetic science and forensic technologies, may impact the parties' duty to investigate IHL violations. At a different level, technology is rendering it more difficult than before to keep military secrets and hide violations of the laws of war (as illustrated by the impact of WikiLeaks).

While technological innovation has often led to new rules of IHL, most of these recent developments in military and military-related technology have not been met so far with formal amendments of the treaties comprising laws of war and of their mechanisms of enforcement. Still, the new military technologies are expected to impress on IHL law-makers and law-appliers the question whether existing legal concepts and their traditional interpretations need to be adapted to changing realities. More controversially perhaps, some may argue that the continued validity of core IHL doctrines and principles needs to be re-evaluated in light of changing conditions.

Presentation: Mr. Anton Camen (International Committee of the Red Cross) surveyed the main areas in which new technologies challenge existing principles of IHL: cyber-warfare, automated systems (robotics), and new kinetic weapons. His conclusion was that the traditional principles of IHL are, as a rule, flexible enough to meet the new challenge.

Capt. Nimrod Karin (Legal Adviser, IDF) discussed the problem of vetting the legality of non lethal weapons - under existing international law, such weapons should be inspected for their compatibility with the laws of war, but there is no clear procedure to follow for new weapons designed primarily to be applied in non-war circumstances (such as riots, etc). Dr. Tom Ruys (University of Leuven) dealt with the legality of “the punisher”, a new weapon involving the explosion of projectiles above hidden targets.

The conference keynote presentation by Prof. Tim McCormack (Melbourne Law School) mapped the legal difficulties in regulating cyber-weapons and robotics. It posited that law is destined to lag behind technology and called for a more robust system of legality review for new weapons.

Presentations: Prof. Eyal Benvenisti (Tel-Aviv University) discussed the way in which new technologies are increasing the choice available to decision makers, thus also underscoring the role of review of discretion procedures. Dr. Amichai Cohen (Ono Academic College) dealt with the changes in proportionality analysis brought about by the development of improved defensive weapons that render attacks against civilian populations by enemy combatants less likely. Dr. Noam Lubell (University of Essex) illustrated a number of ways in which new technologies render obsolete many aspects of the principle of distinction, calling for revaluation of basic assumptions about the protective potential of IHL.

Presentations: Dr. Robin Geiss (University of Potsdam) presented a number of methodological problems relating to the extension of ordinary rules constituting the laws of war to cyberspace. Adv. Daniel Reisner (former Head, IDF International Law Department) addressed the implications of introducing automated decision making machines into the battlefield and the accountability problems such a development entails. Prof. Markus Wagner (University of Miami) dealt with the implications of conduct of hostilities, notions of risk and fairness that ensue from the use of automated weapon systems.

Session VIII: In Need of a Legislative Reform?

Although the need to develop or adapt existing law to changing technology is by no means unique to the field of IHL, the political difficulties associated with reforming IHL and the slow response time characterizing past attempts to reform them, place extra responsibility for modernizing IHL on the shoulders of law-interpreters and appliers. Academics have a particularly important role in helping to identify and find an adequate response to the challenges facing IHL in a new technological age.

These are issues of great immediate, practical importance for Israel, Germany and the international community at large – as evidenced by the large number of current and former military lawyers who participated in the discussions. 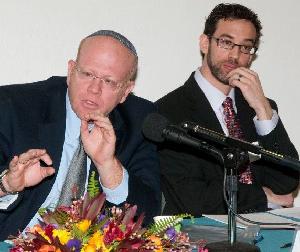 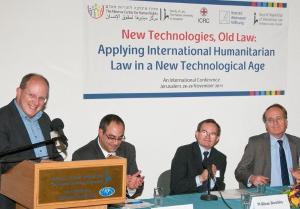