A Bridge Under Troubled Water?

Offshore energy discoveries and the geopolitics of the eastern Mediterranean

On the 27th and 28th of November 2013, academics, diplomats and politicians from Israel, Turkey, Cyprus and Greece discussed the opportunities and challenges with regard to the discoveries of large natural gas sources in the eastern Mediterranean. The seminar was organized together with the Harry S. Truman Research Institute for the Advancement of Peace at the Hebrew University of Jerusalem and the KAS Israel.
December 2, 2013 Ordering Information

Opening Session: New Energy Sources: An Abyss or a Bridge?

The first session provided a fundamental analysis of the political chances and risks following the discoveries. Led by moderator Oren Nahari, a well known Israeli television journalist, representatives of the affected countries (except for Lebanon and Egypt) reported and discussed what natural gas discoveries could imply for the future of regional cooperation in the Eastern Mediterranean.

The Israeli perspective was presented by Ambassador Michael Lotem, Special Envoy for Energy Issues from the Israeli Ministry of Foreign Affairs. Ambassador Dimitris Hatziargyrou commented on the Cyprian point of view, Ambassador Spiros Lampridis on the Greek position and Dr. Aykan Erdemir, Member of the Turkish Parliament, gave his country’s position on the matter.

Over the course of the discussion it became apparent that a a main point of contention for determining the route of a future pipeline is the unresolved Cyprus issue. For the distribution of Israel’s natural gas, there are three different options: Firstly, there is the opportunity for a pipeline to run through Greece, which would be technically very ambitious and very expensive due to the varying depths of the ocean floor. Secondly, a liquefied natural gas plant on Cyprian ground could be considered. The third option would consist of a pipeline through Turkey – a possibility which would be unrealistic until the Cyprus issue is solved.

From the Turkish point of view, the third option is the most desirable because it would reduce the dependency of natural gas imports from Russia, Iran and Azerbaijan, while promoting a closer connection between Turkey and the EU. Greece and Cyprus’s main interest is that both countries could generate urgently needed state revenue through natural gas transport. Altogether, it was agreed that the opportunities underlying a cooperation are far greater than the risks and therefore an advantage for all involved actors.

Session II: The Economics and Law of Eastern Mediterranean Energy

The second session approached the economic and legal framework of Energy policy in the Eastern Mediterranean. Prof. Rauf Versan from the Istanbul University, commented on the difficulties of the application of the United Nation’s Convention on the Law of the Sea, which Turkey and Israel did not sign. Disagreements regarding the expansion of the overlapping “Exclusive Economic Zones” (Art. 55 UNCLOS) are currently primary barriers for regional cooperation on energy issues.

Nimrod Novik, Senior Business Executive and former Policy Advisor to Israel’s Prime Minister, used the “Egypt-Israel Natural Gas Project” (EMG) as a case study on how an international Energy Project comes about and the type of political difficulties it is faced with.

Prof. Alfred Tovias from the Hebrew University of Jerusalem analyzed the political and economic interests of the European Union in the Eastern Mediterranean. Dr. Itay Fishhendler, from the Truman Institute, elaborated on the concept of Energy Security in his presentation. He distinguished between four dimensions: Energy Security, Energy Independency, Acceptability (not always given with nuclear energy) and Affordability. For Israel, the question raised is, if Israel will make its own energy sources available for export, and to which amount. It has been argued that the resources should only be consumed in Israel.

The third session focused on the possible changes in the regional power balance as a consequence of the discovery and exploitation of new energy sources. Prof. Michael Emerson from the Center for European Policy Studies, Brussels, addressed the question if economic constraints in using natural gas sources as soon as possible would accelerate an arrangement on the Cyprus issue (for more details see „Fishing for Gas and More in Cypriot Waters“). Dr. Andreas Stergiou from the University of Crete predicted the development of a Greek-Cypriot-Israeli alliance – which would be depending on Israeli cooperation. By explaining the Israeli position in a changing Middle East, Dan Meridor, former Deputy Prime Minister of Israel, lead over to the following session.

Prof. Moshe Maoz (Truman Center, University of Michigan) elaborated in his presentation on the bloody deployment in Syria focusing on the ethnic-religious composition of the supporters and the opponents of the Assad-Regime. He particularly mentioned that for many Syrians, the fear of the terrorist network Al-Qaida let the Assad Regime appear as the lesser evil. The international agreements for the control and destruction of the Syrian chemical weapon arsenal supplied Assad a temporary chance of survival.

Prof. Elie Podeh (Truman Institute) analyzed the developing of Egypt after two revolutions (the fall of the Mubarak- and the Mursi-Regime) in a short period of time. He distinguished between four forms of political upheaval in the Arab world: the “active revolution” (Tunisia, Egypt, Yemen); the civil war (Libya, Syria); the “refolution” a mixture between revolution and reform (characteristic in particular for monarchies who are willing to modernize like Jordan, Morocco and the United Arab Emirates), and the “status-quo-orientation” in countries which have already faced large upheavals in the past (Iraq, Lebanon, Palestine, Algeria).

Prof. Raphael Israeli (Truman Institute, author of the recently published book „From Arab Spring to Islamic Winter“) investigated the question of whether the series of upheavals in the Arab world, which began in Tunisia in December 2010, paved the way for illiberal, reactionary Islamist forces (Muslim Brothers, Salafists and others) and therefore provoked an “Islamic Winter” in the region of the Middle East and North Africa. In this context, he expounded on the problems of the comprehension of democracy of the “Arab Street”.

In the last session, the speakers compared the situation of the Eastern Mediterranean with other sea regions. Dr. Ran Shauli (Truman Institute) focused on Southeast Asia and the local search for energy sources. Dr. Micha’el Tancum (Truman Institute) showed in his presentation that the commonality of energy interests in India and Japan lead to a new maritime alliance in the South China Sea. Yoel Guzansky from the Institute for National Security Studies (INSS) presented a picture of the complex conflict- and cooperation relations of the Arabian Gulf States which are a result of the new oil source discoveries. Dr. Christopher Pokarier (Truman Institute, Waseda-University Tokyo) analyzed the Australian politics of the East Timor Issue and with regard to the conflict over mineral oil and natural gas sources in the Timor Sea. Dr. Pokarier elaborated on how the “Treaty on Certain Maritime Arrangements in the Timor Sea” (CMATS-Treaty) defined a solution which is economically beneficial for both sides. 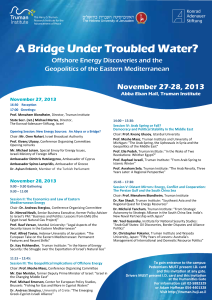 A Bridge under Troubled Water?