The “Berlin Document” by the International Council of Christians and Jews

Its importance for Christians and Jews in the Holy Land

On 6 September 2012, a remarkable and well received conference was held on Christian-Jewish relations, organized by the Konrad-Adenauer-Stiftung Israel (KAS) in collaboration with the Interreligious Coordinating Council in Israel (ICCI), the Jerusalem Center for Jewish Christian Relationships (JCJCR) and the International Council of Christians and Jews (ICCJ).
September 11, 2012 Ordering Information

ICCJ is the umbrella organization for a network of 38 Jewish-Christian dialogue organizations world-wide, a German member is the “German Coordinating Council of Associations for Christian-Jewish Cooperation” (DKR).

On the significance of the “Berlin Theses” from 2009

The twelve Berlin Theses are a “re-commitment”, aiming to express a new phase in the Christian-Jewish dialogue. This document was adopted in 2009 at a meeting in Berlin that the Konrad-Adenauer-Stiftung Israel had also organized. Since the “Seelisberg Theses” of 1947, the Christian-Jewish dialogue has experienced an impressive change. While dealing with their own guilty past, the churches began to consider a new Christian perception of Judaism. This path finally led to a “dialogue on an equal footing”. In that respect, Jews and Christians seek to recognize each other with regard to their particular traditions. That includes the question what both sides can learn from each other and what they have in common.

In the history of the Christian-Jewish dialogue, the Berlin Theses is the first international document that Christian and Jews have fully developed together, addressing both communities in a common appeal. Moreover, the text is available in Hebrew by now and published as a booklet. That publication was the major reason for the conference in Jerusalem and became the focal point for the discussion.

All speakers stressed that the Berlin Theses were written from a distinctively Western perspective. Whereas in the east, the Christian-Jewish dialogue is placed in a different context: on the one hand, it is consistently overshadowed by the Arab-Israeli conflict; on the other hand, the unique situation in Israel is due to the fact that Jews are the majority while Christians represent only a minority. Furthermore, the Holocaust did not develop a similar impact on the discourses within the Eastern Churches (Orthodox) as it did in the Western Churches (Catholic, Protestant).

The content of the Berlin Theses can be divided in the following main topics:

Within the inter-religious cooperation, the Berlin Document presents an attitude that is able to also recognize modern values in accordance with a full respect for the various religious communities.

The objectives of the Berlin Theses are clearly defined:

The Berlin Theses also aim for cooperation with political and economic institutions. The text “The story of a relationship in change” accompanying the document enlightens this ambition: “We invite Jews and Christians from all over the world to join us in the pursuit of the aims we have set ourselves, aims, that come from our common belief that God expects us - especially as Jews and Christians - to prepare the world for the kingdom of God, the coming age of justice and peace.”

Outcomes of the Jerusalem Conference

The conference in Jerusalem consisted of two units:

2) A public lecture with more than 100 participants.

Michael Mertes, Director of KAS Israel, opened the public event with the promise to continue supporting the dialogue between the religions in the region. The speakers Rabbi Yuval Sherli, Director of the Talmud Torah school in Petach Tikva, and Reverend Canon Hosam Naoum, Dean of St. George's Cathedral in Jerusalem, bore moving witness to the Christian-Jewish dialogue in Israel and the Middle East. Both conference units were directed by Dr. Debbie Weissman, President of the ICCJ. A panel discussion involving the audience concluded the evening.

Not only for those who are deeply involved in interfaith dialogue and actively work for it, but for most people in Israel, it goes without saying that a peaceful coexistence of religions and religious denominations is a priority in daily life and society.

With this event, KAS Israel together with its partners ICCI, JCJCR and ICCJ were successful in raising the awareness of this important issue. Thus, they paid a contribution to the work of reconciliation and mutual respect that is of special importance to Israel and the people of Jewish, Christian and Muslim faith living here. 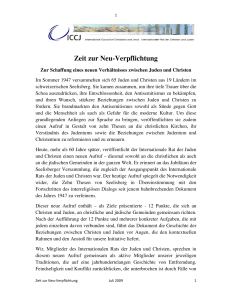 Changes in Jewish-Christian Relations in the West