New Impetus for the Bologna Process in Europe and Israel

How can Israel learn from the Bologna process in Europe? Which of the instruments can be implemented in Israel and what needs to be considered in order to implement them successfully? These questions were discussed in a joint workshop organized by the Konrad-Adenauer-Stiftung, Ben-Gurion University of the Negev (BGU) and the Centre for the Study of European Politics and Society (CSEPS) at Ben-Gurion University on May 22, 2012, at the Konrad Adenauer Conference Center in Jerusalem.
May 28, 2012 Ordering Information 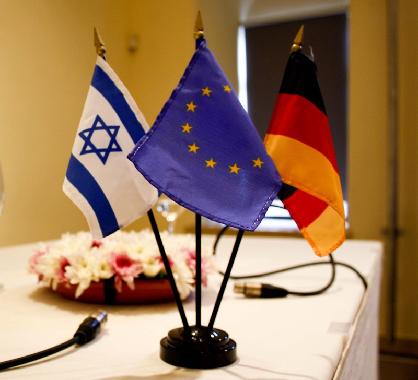 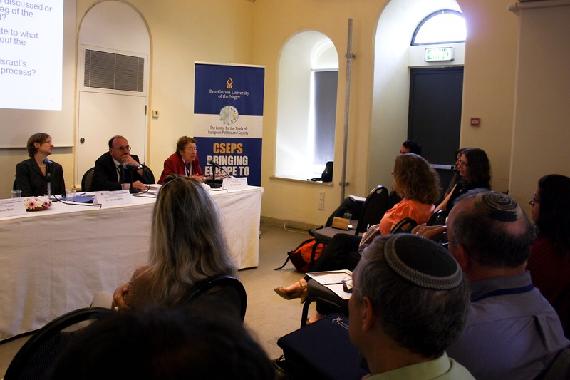 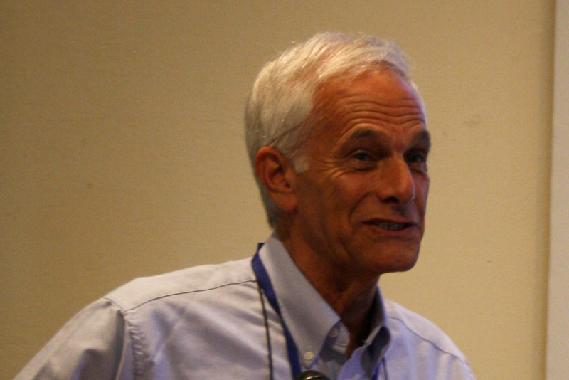 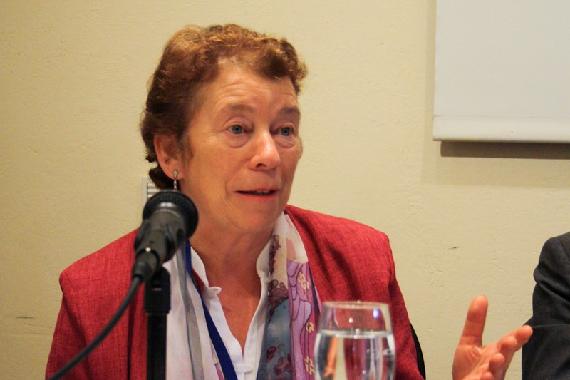 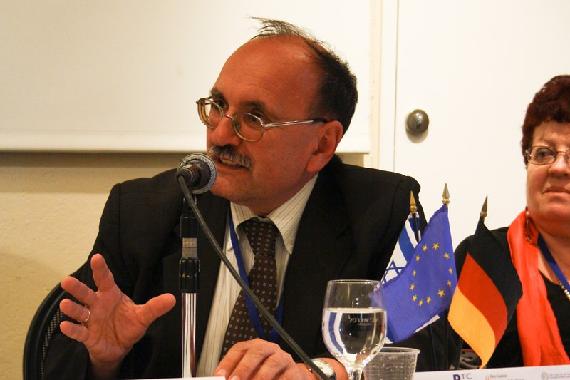 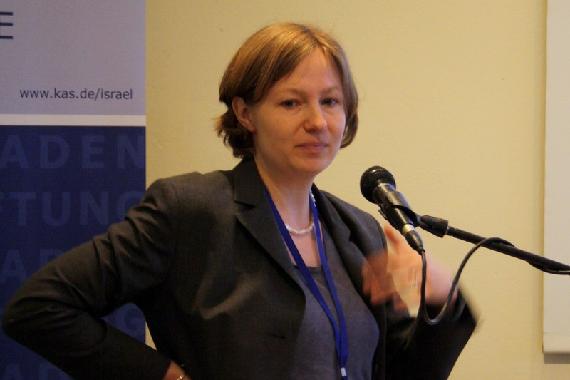 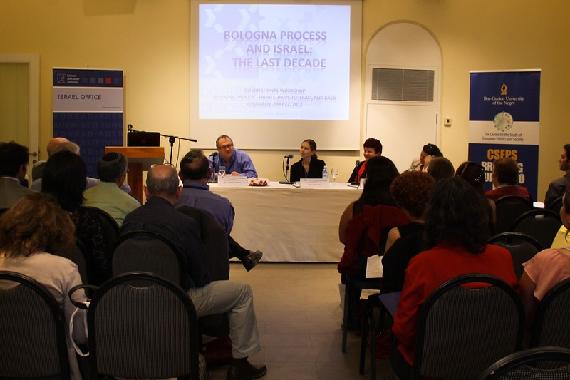 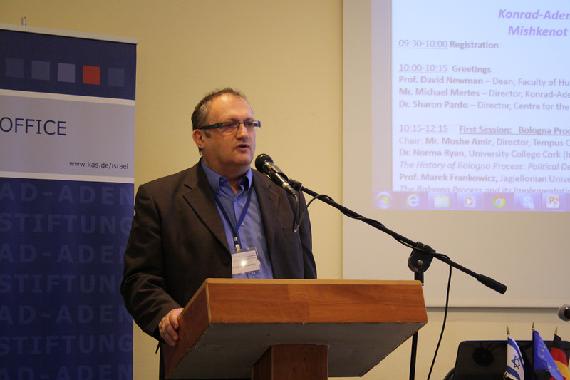 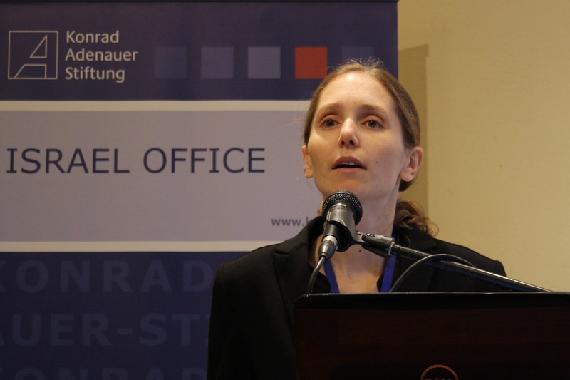 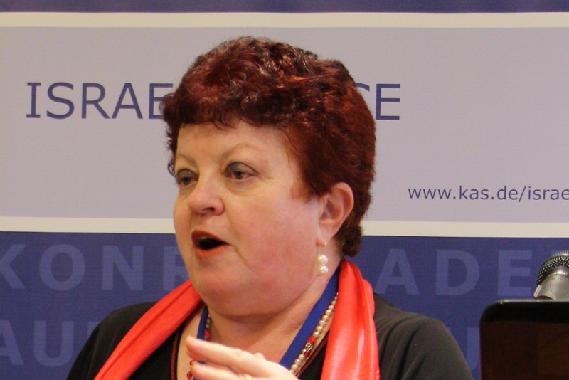 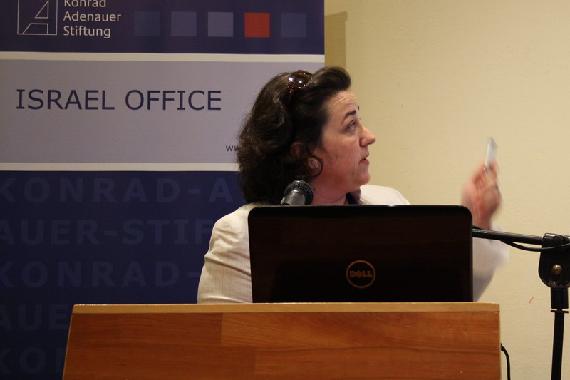 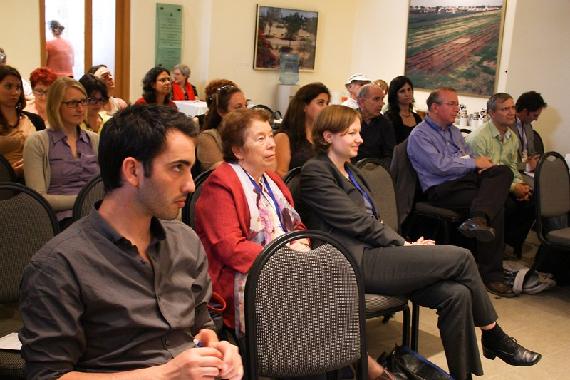 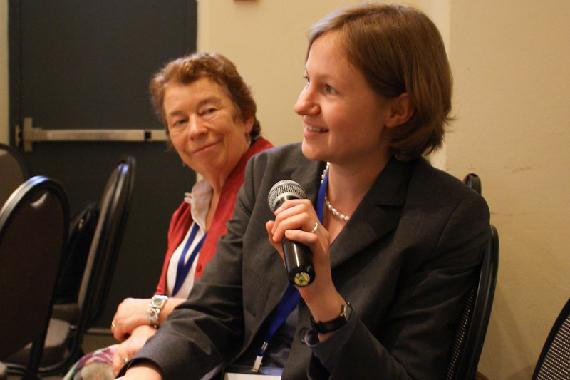 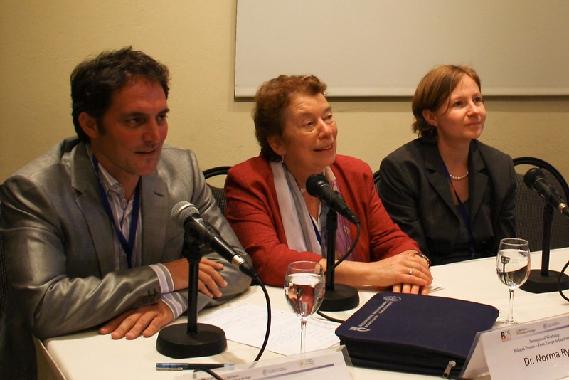 Please find here a video documentation of the workshop.

The Bologna process – referring to a major European reform to create a single European Higher Education Area - Erasmus exchange, student participation, and the transition to Bachelor and Master degrees have stirred up the academic landscape in many places. And although not belonging to Europe, Israel also wants to further develop its higher education system and improve the conditions for teaching and research.

Prof. David Newman, Dean of the Faculty of Humanities and Social Sciences at BGU, andDr. Sharon Pardo, Director of the CSEPS, welcomed the participants and expressed their gratitude about the fruitful cooperation with KAS. In turn, Michael Mertes, Director of KAS Israel, thanked the co-organizers of the event for the productive and future-oriented cooperation. All three speakers agreed that the work of thenew "Bologna Training Center"could be a particularly effective tool for the future design of Israeli universities by advising and training university and college administrations across Israel during the introduction phase of Bologna structures.

During the first session, three European experts gave an introduction to the Bologna process and related their experiences with the implementation. Being a passionate supporter of the European higher education reform,

Dr. Norma Ryanfrom the University College Cork first spoke about the historical and political developments of the Bologna process.

Since the beginning of the project in 1999 as an intergovernmental endeavor with 29 states, the number of members has now grown to 47. The Bologna process is no longer limited to the educational institutions of the member states of the Strasbourg based Council of Europe, and can therefore be of great importance to Israel. Bologna stands for transparency, openness and the promotion of diversity – not uniformity, as often negatively associated with Bologna. Further key aspects of the reform are mobility, employability, quality assurance and participation of students. Hence, Ryan explained, it was important that students were not regarded as mere "recipients", but as a partner and driving force within the complex reform process. From the very beginning, experts met on a regular basis discussing the problems and possible improvements of the reform. As Ryan concluded, "much has been achieved and yet there is still much to do".

Prof. Marek Frankowiczfrom the Jagiellonian University in Krakow, Poland, reported on the challenges of implementing the Bologna process. He pointed out that there also existed criticism with regard to the reform. For instance, the transition to Bachelor and Master degrees had led to protests from students and teachers in many places. While the implementation of the reform had been relatively successful on the international political level, at the institutional level there were unfortunately some problems to be overcome.

Nonetheless, Prof. Frankowicz believes in the idea of Bologna, responding to critics that the reform should be seen more like a fashion show: While the designers create innovative clothes, these are often unsuitable for the everyday use. However, such fashion shows can provide new trends such as the color of the season, of which the end consumer can choose those outfits that correspond to his style and preferences. Applying this metaphor to the education system, Prof. Frankowicz sees the possibility to preserve

diversity within the Bologna process. Every university should be free to adapt ideas according to its own profile. In his opinion, the success of the reform largely depended on the ability to involve all stakeholders.Dr. Johanna Witte, from the Bavarian State Institute for Higher Education Research and Planning, related a researcher’s perspective. She pointed out that one of the biggest challenges of the Bologna reform was to balance its different and sometimes conflicting objectives. The aim to create comparability and convergence on the one hand, and still promote diversity and autonomy on the other hand, could create tensions, just like the goals of cooperation and competition among universities. Although there was no ideal path to Bologna, Dr. Witte encouraged Israel’s policymakers to learn from the experiences and mistakes of European countries and to adapt ideas of the Bologna process in such a way as to fit the Israeli system. She further sensitized the Israeli audience to not underestimatethe power of human and cultural factors– it was important to foster public discussion in order to communicate various developments in the higher education system within Israel. Like her European colleagues, Dr. Witte stressed the need to involve all stakeholders - political institutions, students and professors – as this was the only chance to create a proactive approach to an educational reform.

During the second session, the focus was on Israel and the question how Israel could make use of the Bologna process. Moderated by

Where does Israel stand? The current status of the Bologna Process in Israel was addressed by

Shira Lanir. On two occasions, in 2007 and 2008, Israel applied for admission to the Bologna process, but both requests were rejected. Nevertheless, Israel is a regular participant of the “Bologna Policy Forum” and an active contributor to various Bologna-related projects, such as the new “Bologna Training Center” and "Tempus Corinthiam”.Prof. Sarah Guri-Rozenblit, Director of International Academic Outreach, from the Education & Psychology Department at the Open University of Israel, provided an insight into the challenges and prospects of the Bologna process and the higher education system in Israel. Just like the European speakers, she believes that Bologna is not about creating uniformity, but rather about"harmonizing" the higher education system. In her opinion this was essential to create a common "language" in the academic world, in order to facilitate effective communication and cooperation among stakeholders. Particularly with regard to the terminology and accreditation of academic qualifications, Israel still had a long way to go. The fact that equivalent degrees from one Israeli university were often not equally recognized presented a huge obstacle to an effective inter-university cooperation in the country.Adi Edlira Kahani, desk manager at the Israeli Ministry of Education, confirmed that necessary reforms in the Israeli higher education system were still pending. However, she pointed out that especially in the last two years things have changed considerably – thanks inter alia to initiatives such as the "Bologna Training Center" at Ben-Gurion University. In addition, severalexchange and scholarship programsexisted, such as the Erasmus Mundus program, promoting the internationalization of Israeli universities. In this sense, various elements of the Bologna process have already been integrated into Israeli higher education reforms.

The conference was completed by a roundtable, in which all speakers as well as the audience participated under the guidance of moderator

Dr. Carlos Machado. As the panel turned into a lively discussion, the variety of questions presented to the experts underlined the relevance of the topic for the Israeli public.

At the end of the day, all participants agreed that the event was a great success. Although the Bologna process may not be a panacea for the various problems within Israel’s higher education system, it can offer some valuable incentives and suggestions for an educational reform and strengthen the relationship between Israel and Europe at the university level. In this respect, the

"Bologna Training Center"at Ben-Gurion University can function as an important facilitator and support these developments in cooperation with the Konrad-Adenauer-Stiftung by providing a platform for discussion and exchange.

The Bologna Process: The aim of the Bologna process is to create a single and coherent European Higher Education Area. In 1999, 29 European Ministers of Education signed the Bologna Declaration, by now there are 47 signatories, some of which non-EU members. The reform provides for a system of comparable degrees, the introduction of the European Credit Transfer System (ECTS) as well as greater cooperation between institutions of higher education in Europe.

Tempus: Tempus is a program of the European Union with the aim to support the modernization of higher education systems in partner countries in Eastern Europe, Central Asia, the Western Balkans and the Mediterranean region. The program is run mainly by cooperation projects between universities.

Tempus - Corinthiam: Corinthiam is a Tempus project with the objective to foster the quality and internationalization of universities in the Mediterranean region. This includes the introduction of various “Bologna” elements, such as the European Credit Transfer System (ECTS), in order to improve the mobility of students. The project is led by a consortium consisting of four Israeli and two Palestinian higher education institutions as well as seven European universities.

Higher Education Reform Experts (HEREs): The Higher Education Reform Experts are a selected group of higher education experts, which has set itself the goal of promoting the Bologna goals outside of Europe while taking into account national characteristics. The various country teams consist of directors, deans, researchers, and students and advise academic institutions with regard to accreditation of degrees, curriculum reform, ECTS and quality assurance. 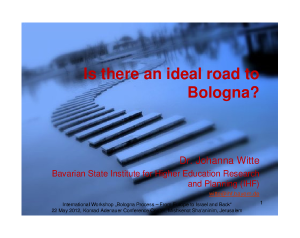