The Status of Arabic Language in Israel

In the framework of its Konrad Adenauer Program for Jewish-Arab Cooperation at Tel Aviv University the KAS organized important conference on “The Status of Arabic Language in Israel: Linguistic Policy, Language, and Identity”. This topic, which concerns the Israeli society as a whole, generated great interest and attracted a very large audience.
March 29, 2011 Ordering Information

Dr. Lars Hänsel presented with an Award of Distinction on behalf of the Faculty of Humanities at Tel Aviv University 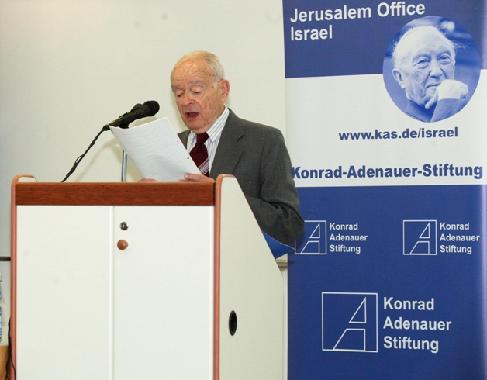 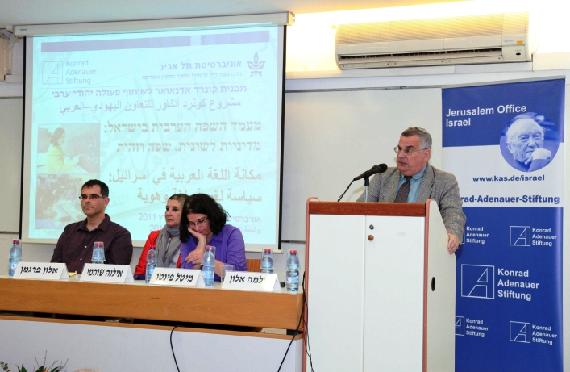 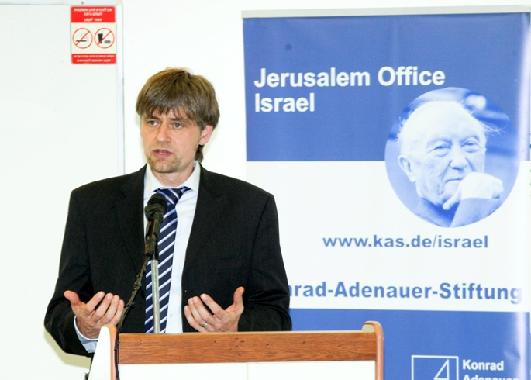 The first panel "Arabic Language in a Jewish Nation-State"

In recent years, critics in circles of Israel's Arab community have expressed concern regarding Arab citizens' increasing tendency, especially adolescents and young adults, to incorporate Hebrew phrases into spoken Arabic and, even, occasionally prefer the use of Hebrew over Arabic in everyday situations. Critics caution that this process will undermine the status of Arabic among the country's Arab population. Being that the Arabic language is a significant component of Arab identity in Israel, concerns for the fate of the Arabic language epitomize greater apprehension over the fate of Arab national identity within the state.

Moreover, in the past decades right wing Knesset factions have submitted several bills that seek to establish Hebrew as the country's sole, official language; such legislation would revoke Arabic of its official language status within the state. These same initiatives are viewed by left wing Knesset members, both Arabs and Jews, as attempts to create institutionalized discrimination against Israel's Arab citizens. As such, from the political arena to the grassroots, Arabic language and its status in Israel has become a heated and politicized issue of debate.

Contrarily, several noteworthy proposals have sought to reinforce the status of Arabic language in Israel. For example, following a Knesset-approved bill, the Academy of Arabic Language (Majma' al-Lughah al-'Arabiyya) was founded in January 2008. Additionally, another proposed initiative heralded the establishment of a new, certified academic institution in the Galilee, where the language of instruction will be Arabic. Also, in December 2009, Minister of Education Gideon Saar announced his intention to reinforce the position of the country's Arab education system by bolstering the status of Arabic language.

Bringing together academics from a variety of Israeli institutions of higher education and representatives from Israeli Governmental Agencies, with regard to the usage and status of Arabic language, panelists who participated in the conference touched upon a number of themes that illustrate the current challenges faced by Arabic speakers, teachers, and policymakers in Israel. Prof. (Emeritus) Yaakov Landau of the Hebrew University in Jerusalem delivered the keynote speech. He specifically highlighted the role of language in the process of building national identity. He drew a comparison between Arab youth in Israel and their counterparts in areas of the Former Soviet Union, particularly in Uzbekistan, Kyrgyzstan, Turkmenistan, and Kazakhstan. Using this example, Prof. Landau noted the tension that often exists between the "state language," imposed from above, and the "national languages," spoken by minorities who do not identify with the state's characterization of its citizens. Even in the case of Israel, in which Arabic and Hebrew are both official languages of the state, in reality each language's place in the education system is very different. For instance, Hebrew is the predominant language of instruction and test-taking. In fact, Prof. Landau stated, in the entire world, "Finland is the only country in which there is real equality between two languages."

Dr. Shlomo Alon from the Ministry of Education chaired this first session of discussants and expressed the fact that Hebrew in the Israeli education system holds a dominant position over Arabic. However, he is optimistic that reforms and continued efforts at changing this current reality could increase the use of Arabic language, as well as shift Hebrew speakers' relationship to Arabic from viewing it as a foreign language, to accepting it as a second mother tongue. Echoing Dr. Alon's call for reforms, Dr. Meital Pinto, from the Carmel Academic Center in Haifa, stressed the importance of establishing a discourse on language rights. She emphasized that the freedom to use one's language, especially a state minority's right to speak, learn, and live using their mother tongue is as important and crucial to a democratic society as the freedoms of religion and expression.

Prof. Elana Shohamy of Tel Aviv University introduced the audience to the concept of "Linguistic Landscape", and what it reveals about the function of the spoken languages in a given society. In Israel, a mere look at the languages used on street signs and stores front signs marquees reveals the "discursive construction of place and space," she said. Walking through neighborhoods in Israel, one can easily guess whether the community is Hebrew-speaking, Arabic-speaking, or negotiating their way in a combination of these and other languages. In theory, she said, public space belongs to all members of society, but in an era of globalism, "metrolinguistics", and linguistic enclaves, the public space reveals the many places where society is divided. In the Israeli case, this requires linguistic policy to address the absence of linguistic inclusion in the public sphere, in areas of both Arabic and Hebrew speaking communities.

Dr. Alon Fragman of Beit Berl Academic College reviewed the results of his research on teaching Arabic to Hebrew speaking high school students. Linguistically, the differences in the structure and pronunciation of Arabic language challenge Hebrew students. Dr. Fragman posed the question of: Whether or not it is more important to teach spoken or classical Arab to Hebrew speakers? He expressed that part of the separation between these two linguistic communities is the inability to communicate with each other. Although most Arabic speakers also speak Hebrew, a trust-building measure could be derived from more Hebrew speakers being able to communicate in Arabic.

The second panel focused on "Language and identity in the Arab society in Israel".

Chaired by Dr. Khaled Abu Asbeh, Director of the Massar Research and Planning Institute and lecturer at Beit Berl Academic College, this panel dealt with Arab youngsters and adolescents; their education in Hebrew and Arabic; and the social, economic and cultural effects they experience living in a predominantly Hebrew speaking society. The Arabic speaking citizen is, de facto, forced to find the balance between his Arabic mother tongue and the dominant Hebrew state language, and the identity politics wrapped up within this reality, said Dr. Asbeh. He suggested the need for citizens' discourse on the issue of language in order to increase cooperation and to promote better understanding between Israel's Arabs and Jews.

Continuing the discussion of the correlation between language and identity, Dr. Abdul Rahman Mar’i, of Beit Berl Academic College, noted that even within Israel there are differences between Arabic speaking societies, depending on their geographical distribution or even religious affiliation; this adds more layers to an already complex situation. Dr. Mar'i drew the audience's attention to a recent trend in which Arabic speakers are taking on Hebrew names, the significance of which implies in same cases, possibly a desire or perhaps a recognized expediency to identify with the majority. Contrarily, an unwillingness to associate with the state becomes apparent in the self-designated identification as an Arab or Palestinian in Israel, which clearly rejects the hyphenated definition of being Arab-Israeli. Dr. Mar'i also pointed out the labels given to Arabs in Israel by the Hebrew speaking sectors of society, which has changed over the state's history (usually corresponding to times of war and peace), and how these labels affect the ability of the Arabs in the state to participate and interact in greater Israeli society.

Dr. Mahmud Kayyal of Tel Aviv University brought the discussion to the internal politics of Arabic language within Arabic speaking societies throughout the Middle East. Dr. Kayyal emphasized that academia throughout the Arabic speaking world is presently dealing with the difficulties posed by the coexistence of spoken and literary Arabic. Processes of globalization and modernization contribute to the ever-evolving state of spoken Arabic, and academia's attempts to maintain some universal standards across institutions. Unfortunately, despite the fact that in the past few years an Academy for Arabic language has opened in Israel, similar institutions in neighboring countries are not willing to coordinate educational initiatives for political reasons. Furthermore, there is a need to encourage more Arabic speaking students to study the language at the academic level so that such studies continue in the future. In this regard, the state of Israel could be helpful in providing funding for improving these institutions, as well as for scholarships to students who are committed to studying Arabic at the academic level. Of course, budget cuts in education, which are affecting the quality and breadth of education throughout the state, also hinder some of these very positive and promising initiatives.

Mr. Mohanad Mustafa, of the University of Haifa, mentioned three trends that encapsulate the major obstacles to generating better-educated Arabic speakers in Israel. First, Mr. Mustafa claimed that since the second Intifada, the gap between the Arabic speaking population of Israel and the Hebrew language has increased, which negatively affects this population, as it lives in a predominantly Hebrew speaking country. In a similar vein, the increase in telecommunications (and access thereto) in Arabic language has drastically reduced the Arabic speaking community's reliance on Hebrew language media, and fostered a preference for Arabic language programs broadcasted throughout the Middle East and the rest of the world. Secondly, even where students have learned Hebrew in the Arabic speaking community, the relationship to it is that of a foreign language, and not that of a second language necessary for personal and professional development. Thirdly, Mr. Mustafa’s research shows that the resistance to learning Hebrew, and the lack of Arabic instruction at all levels of education, produces an Arabic speaking society that can neither write well in Hebrew nor in Arabic. Thus, the identity politics involved in the usage of Hebrew language only further place obstacles in the way of Israel's Arabic speaking community and its struggle to reach political and economic parity with its Hebrew speaking counterparts.

Overall, the conference sought to provide an opportunity to discuss the sensitive issues related to linguistic policy as it pertains to Arabic in Israel; to compare the case of Israel to similar cases worldwide; and to explore issues of identity and language in Arabic society in Israel.

The Status of Arabic in Israel

Dedicated Democrats against the Global Trend?

Nationalismus in Europa - Einheit in Vielfalt?