The Israeli elections scheduled for March 17th have the potential to be historic for Arab citizens. This is, in large part, due to the formation of the Joint List, which stands to become perhaps the third-largest faction in the Knesset, and a potential electoral ‘kingmaker.’ Consequently, on March 10, 2015, our Konrad Adenauer Program for Jewish-Arab Cooperation at the Tel Aviv University hosted a conference on “Arab Politics in Israel and the 20th Knesset Elections.”
March 15, 2015 Ordering Information 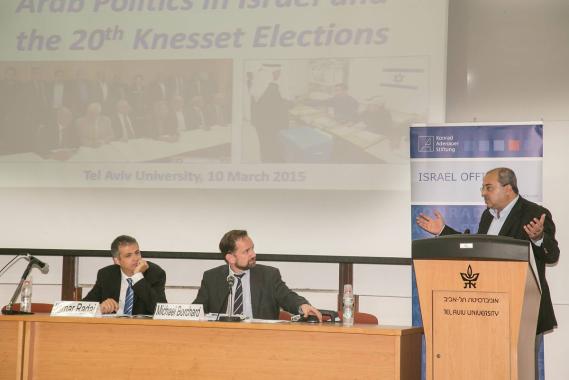 The conference featured the findings of our latest survey on the potential voting patterns of the Arab citizens of Israel in the upcoming Knesset elections.

The event was well attended; guests included interested members of the TAU academic community, representatives of several diplomatic missions in Israel, as well as Arab students and political activists.

Dr. Michael Borchard, director of the KAS in Israel, offered preliminary remarks. He noted that the success of a democracy is judged by the way that the majority treats minority groups. Thus, the role of Arabs in the upcoming Knesset elections is a central issue. Ironically, he acknowledged, the attempted marginalization of Arab political parties has instead caused them to join together and thus, to become stronger than ever. With that said, they will face difficulties in maintaining such unity following the elections, but Borchard argued that it is important that they do.

Opening the first session was Dr. Itamar Radai, KAP Academic Director, who presented the findings of a February 2015 KAP survey of a representative sample of five hundred potential Arab voters (aged 18 and above). The survey was carried out in Arabic, by telephone, four weeks before elections day, and examined a number of factors. The most important finding, the survey predicted, was that 64.7% of Arab voters in Israel were expected to participate; this represents the highest percentage for more than a decade. Moreover, the overwhelming majority of these will be voting for the Joint List. If this holds true on Election Day, the Joint List may expect to gain thirteen seats in the Knesset. Moreover, respondents expressed their belief that it is indeed important to exercise their right to vote, and their decision to do so was positively influenced by the creation of the Joint List. Indeed, the Joint List is believed by 68.3% to be transformative; it will make the Knesset into an arena for effecting positive change on behalf of the Arab public. Moreover, despite the ideological differences, survey respondents expressed an unequivocal desire for the continued unity of the parties, satisfaction with their current Knesset representation. A large majority surveyed expressed a belief that the most important issues facing the Arab public today pertain to internal affairs of the Arab society in Israel, such as unemployment, violence, women’s issues, and education, as well as government policy towards the country’s Arab minority and other civil status issues. Thus, perhaps contrary to the belief of many Jewish Israelis, a final resolution to the Israeli-Palestinian conflict is not thought to be of paramount importance.

In response, Dr. Borchard noted that the survey results were quite compatible with the existing international research on voting behavior. Voter abstention takes place primarily for personal, rather than ideological reasons. Moreover, voters typically support unity over polarization, and will reward those parties at the ballot box that they feel will address their personal needs. It is for this reason that the formation of the Joint List has had a huge impact on the survey results. Yet one must be cautious not to harm the pluralism of the Arab sector; the Joint List is in reality a type of ‘Knesset within the Knesset,’ and represents a wide spectrum of ideological beliefs, ranging from Communism (secularism) to Islamism (religion).

The keynote speaker in the conference was MK Dr. Ahmad Tibi, leader of the Arab Movement for Change (Ta’al) party and number four on the Joint List. Dr. Tibi stated his belief that the current election cycle is truly historic, for a number of reasons. Chief among these is the fact that the four component parties – Hadash (Democratic Front for Peace and Equality), Balad (National Democratic Assembly), Ta’al (Arab Movement for Change), and the parliamentary faction of the Islamic Movement – have responded to the overwhelming desire of their public for unity, despite their own particular ideological agendas. Though it is not, in and of itself, a political party, it nevertheless has a clear and organized platform. Moreover, despite a belief often expressed in the mainstream Israeli media, Dr. Tibi asserted that 85% of the activities of Arab MKs focus on internal, social, and sometimes even universal issues affecting the Israeli public at large. Indeed, Dr. Tibi contends that Arab and Haredi (ultra-orthodox) MKs have often been the most effective parliamentarians; he personally has sponsored twelve successful bills since gaining office in 1999. Concluding, Dr. Tibi emphasized the importance of voter turnout, and remarked that, while the Joint List cannot join the government under current conditions, it nevertheless sees itself actively supporting the formation of a left-wing government, from outside the coalition, in exchange for greater government responsiveness to issues important to the Arab sector.

Following his remarks, Dr. Tibi responded to questions from the audience. When asked about his message to the Jewish public, he stated that the fight against racism and discrimination should be a joint mission; it is not merely an Arab concern. His message was, on the whole, conciliatory; Israeli society should work together and find a common denominator that will allow them to solve issues relevant to them all.

The third session was an academic roundtable entitled “Arab Politics in Anticipation of the Elections.” Chairing the discussion was Mr. Arik Rudnitzky, KAP Program Manager. The first speaker was Dr. Mary Totry of Oranim Academic College, who posed the question whether the 2015 elections truly represent a turning point in Arab politics.

The previous election cycle of 2013, Dr. Totry argued, reflected two salient trends; a steady decline in the percentage of Arab citizens voting for Zionist parties, anda steady decline in Arab voter turnout. She argued that the official figures given for the latter did not reflect reality; there was wide-spread vote-falsification. But the Israeli political establishment, though aware of the phenomenon, did nothing to stop it, because it has a vested interest in Arab Knesset representation. Nevertheless, she believes that falsification will not be an issue in the current elections. Moreover, Dr. Totry argued that the 2015 elections may indeed represent a turning point if three conditions are fulfilled. First, the actual voting percentage of Arabs must increase. Second, the discourse among Arab parliamentarians must change; they must be careful of appearing provocative in the Israeli media. Lastly, the Jewish public and their parties must cut back on incendiary language and search for common ground.

The next speaker was Arik Rudnitzky, who identified a number of questions that still are waiting to be answered. It is clear that what is most important is not the results of the elections themselves, but what happens subsequently. As long as the Joint List exists, there will be positive momentum. The question, therefore, is to which direction such momentum will be exploited? Will there be further integration into Israel’s political system through Knesset elections, or a reorganization of the Arab minority's Supreme Follow-Up Committee as an alternative national framework? We are also seeing what can be termed a ‘localization’ of the national struggle; the discourse is focusing on specific issues that affect the daily lives of the average Arab voter, not necessarily on the larger political and national struggle of the Palestinian people at large for a Palestinian state. It is evident that the current Arab political discourse broadcasts increasing self-esteem, and a self-perception as a cohesive group with genuine political power. Indeed, the platform of the Joint List views itself as a viable alternative to the current status quo. In this, it has the potential to be truly historic.

The final speaker was Professor Aziz Haidar of the Van-Leer Institute in Jerusalem. Professor Haidar remarked that, since at least the early 2000s, civil activity has increased in the Arab sector, at the expense of political activity. But the formation of the Joint List has brought about several important developments. He has identified in the Joint List’s platform a focus on the “discourse of 1967,” namely the notion of “two states for two people,” and an essential retreat from demands for national autonomy within Israel. Meanwhile, there is a renewed emphasis on citizenship and changing the rules of the game from within the Israeli political system. Nevertheless, certain problems still exist; the current feeling of security and self-confidence will not allow the Joint List to cope with them. Among these issues include the fact that it has not succeeded in bridging the significant ideological differences between the parties; they have only been put aside. Indeed, without the raising of the electoral threshold, the merger would never have happened; it was dictated from without and was not a natural development from within. Beyond the ideological problems, it also faces the issue of abstention from voting, which is caused not only by organized boycotts, but also from political apathy.

In conclusion, the Konrad Adenauer Program is proud of the results of the conference; it represented a fulfillment of our goal to enable free, objective, and germane discussion between Jews and Arabs a matter which directly affects them both. It is our hope that the KAP will continue to serve as a vehicle for positive, fruitful, and informative interactions between the Jewish and Arab citizens in Israel. 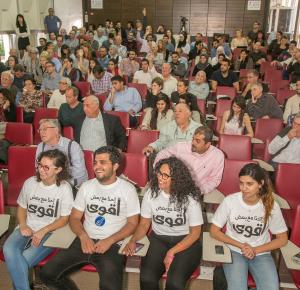 Students at the Tel Aviv University