On 20 June 2012, young Israeli researchers gathered for the first time at a European Studies Conference at Ben-Gurion University of the Negev (BGU) in Beer Sheva to present their research projects. In Israel, European studies are getting more and more popular. Because of its uniqueness the European Union is in itself an interesting and, above all, interdisciplinary study object.
June 26, 2012 Ordering Information 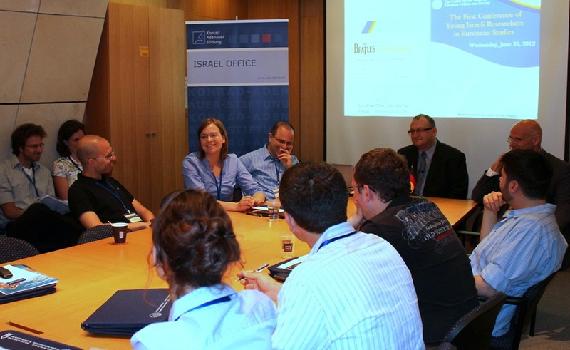 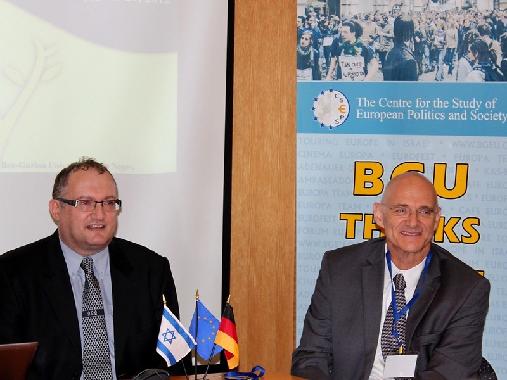 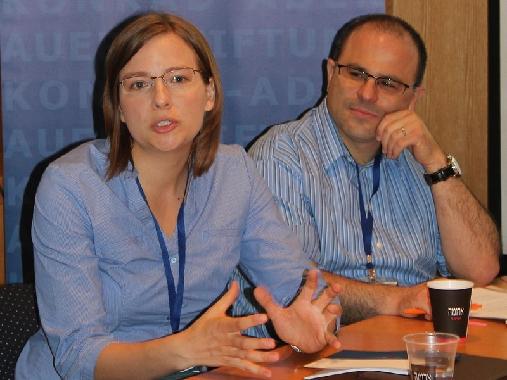 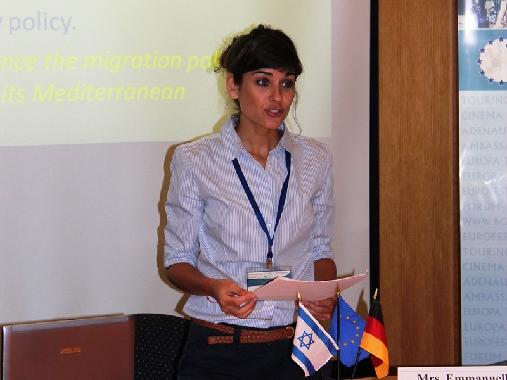 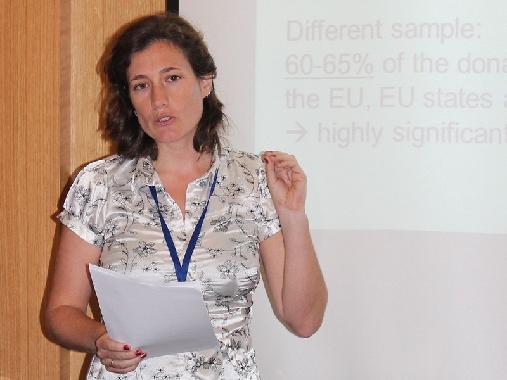 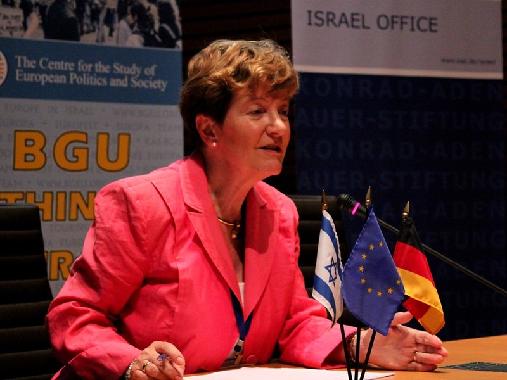 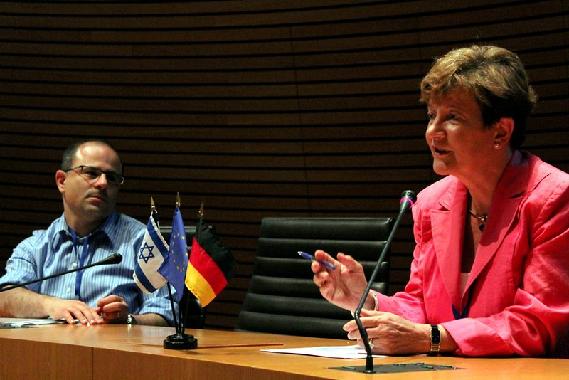 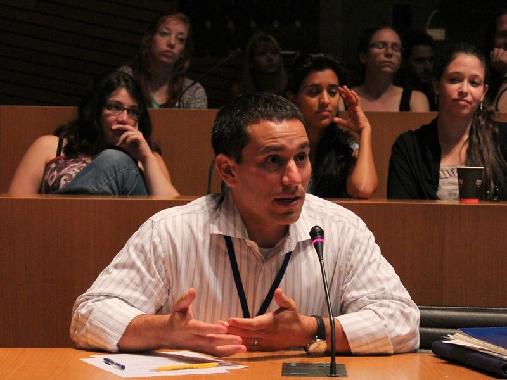 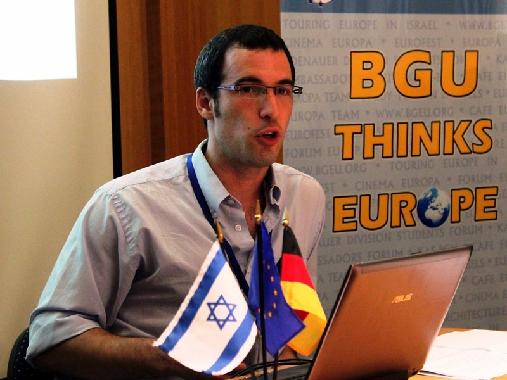 Due to the proximity of the Union to Israel, the Israeli academia is approaching the EU via various disciplines. At the conference, jointly organized by the "Centre for the Study of European Politics and Society" (CSEPS) at BGU, and the Konrad-Adenauer-Stiftung Israel, young researchers of several Israeli universities, such as the BGU, the Hebrew University or Tel Aviv University took part, guaranteeing a lively exchange of views on European policy from an Israeli perspective.

Prof. David Newman, Dean of the Faculty of the Humanities and Social Sciences at BGU, and Dr. Sharon Pardo, Director of CSEPS, welcomed the participants underlining the importance for Israeli universities to integrate European studies into the range of study subjects. Nadine Mensel, deputy director of the Konrad-Adenauer-Stiftung Israel, expressed her satisfaction with the fruitful cooperation between KAS and the CSEPS. She made it clear that the research on Europe and the European Union in Europe needed an external perspective in order to thrive. Mr. Andrew Standley, Ambassador of the European Union to Israel shared that statement. Because of the variety of topics and research areas presented at the conference he showed confidence that the "young" European Studies research will contribute to strengthen the ties between Europeans and Israelis.

In six panels, a total of twenty academics presented their projects on various issues of European politics as well as history. Participating in the first panel “Normative Power and Discourse in European Foreign Policy”, Emmanuelle Blanc explained how emotions served as a catalyst to the “securitization” of European immigration policy. Her work explores the impact of fear, defined as a social construct, which in her view has a lasting influence on European immigration policy. Similarly, the works by Ziv Idov, Yoav Friedman and Hila Zahavi, focus on the political rhetoric and the discourse in Europe on issues of internal security, immigration policy and the perception of Israel in Europe.

Another focus of the conference was the subject of “Islam in Europe” with Ari Varon, Nina Wiedl-Menashe and Yuri Teper contributing to the panel. All three projects investigate the growing importance of Islam in Europe, both demographically and in terms of political integration and domestic affairs. Precisely for this reason a profound analysis of Islam and its various manifestations was essential, the speakers summarized.

The issues discussed in the course of the conference proved to be extremely varied, ranging from the socio-cultural diversity in European cities, the role of theology and nationalism in the political theory of Europe to European identity, collective memory and European citizenship. All participants – young academics, the general audience and the CSEPS researchers – demonstrated throughout the entire event their thirst for knowledge and enthusiasm for European affairs.

Exploring on Europe’s significance in the daily lives of young Israelis, Yossi Harpaz emphasized in the day’s final presentation the attractiveness of dual citizenship for Israelis. A noteworthy increase in applications for European citizenship among Israelis of European origin has been evident since the turn of the century. According to Harpaz’ findings not only economic factors played a role. Carrying a European passport could also be interpreted as a kind of “insurance”, “family gift” or even “status symbol”.

The lecture by Prof. Dr. Beate Neuss, Vice President of the Konrad-Adenauer-Stiftung and Professor of International Politics at Chemnitz University of Technology, marked the highlight of the conference. She raised the question “How Broad is the Atlantic?”, analysing the current state of transatlantic relations, the ability to cope with political, economic and military challenges, as well as prospects for mutual cooperation. Despite numerous stress tests, the relations between Europe and the U.S. were still a success story, because of underlying common values such as freedom, democracy and rule of law, Prof. Neuss concluded. Defending those founding principles stand as a joint endeavour for Europeans and Americans in the face of emerging powers and the shift in relative power within the international system. Those developments were of similar importance to Israel, because of her traditionally close relations with Europe and the United States. In that regard, the contribution of the civil society was particularly essential due to its ability to build and maintain bridges between the continents. The work of the Konrad-Adenauer-Stiftung, whose commitment to Israel was of the highest priority as Prof. Neuss noted, certainly belonged into that category.

With renewed motivation for research projects and a lot of food for thought this conference came to an end. Organizers and participants alike could only agree that the premiere was a resounding success and that the networking among young academics and the strengthening of European Studies in Israel received valuable inputs.